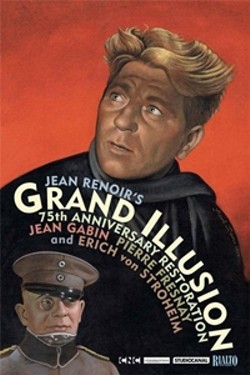 For its 75th Anniversary, Rialto Pictures presents a stunning 4K restoration of GRAND ILLUSION, Jean Renoir's powerful and eloquent anti-war film set during World War I. Aristocratic Captain de Boeldieu and his mechanic, Lieutenant Maréchal are shot down by Captain von Rauffenstein, who treats them with customary officers' hospitality. The two downed pilots are then sent to a German POW camp, where they quickly join a group of prisoners who have concocted an elaborate escape plan. Their plot is foiled, however, as they are transferred to a new camp, the formidable Wintersborn fortress, run by Rauffenstein, who is now grounded due to battle wounds. Rauffenstein, lamenting the end of an aristocratic era, tries to befriend de Boeldieu, but the French captain is already hatching a new escape plan - one in which he puts himself in danger to allow the others to escape. GRAND ILLUSION was the first foreign film to receive a Best Picture Oscar nomination.

Grand Illusion 2012 Re-release is not showing in any theaters in the area.