Hands of the Ripper, Lord of the Flies among new home entertainment titles | View from the Couch | Creative Loafing Charlotte
Switch to the mobile version of this page.

Hands of the Ripper, Lord of the Flies among new home entertainment titles 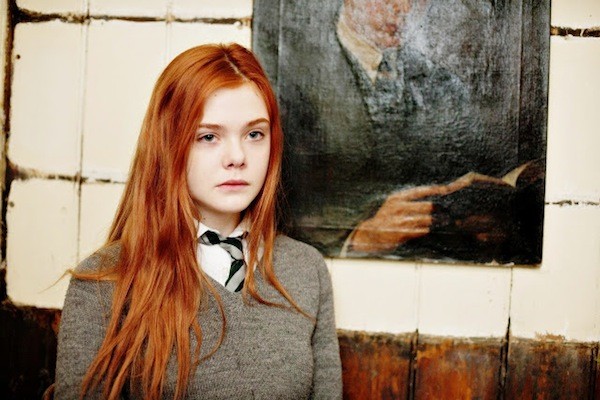 GINGER & ROSA (2013). Elle Fanning's astonishing performance in Ginger & Rosa makes me recall the first time she impressed me, when she stood out as one of the youthful leads in J.J. Abrams' 2011 summer hit Super 8. Because her co-stars this time around are skilled pros like Annette Bening, Timothy Spall and Oliver Platt, she obviously doesn't mop up the floor with anyone here. Yet the movie belongs to her, and her alone. She stars as Ginger, who, along with her best friend Rosa (Alice Englert), was born around the same time that the bomb was being dropped on Hiroshima. Cut to 1962 London, and 17-year-old Ginger continues to live in the shadow of nuclear annihilation, raptly listening to the news and fearful that escalating tensions between the United States and the Soviet Union will result in the end of the world at any moment. She attends ban-the-bomb marches with her gay neighbors Mark (Spall) and Mark Two (Platt) and feminist activist May Bella (Bening) and largely ignores her depressed mother Natalie (Christina Hendricks), choosing instead to idolize her father Roland (Alessandro Nivola). Roland's a pacifist who claims to always live by his convictions; unfortunately, those convictions include stepping out with other women, and when he and Rosa hook up, it threatens to destroy Ginger as surely as any nuclear explosion. Sensitively handled by writer-director Sally Potter, Ginger & Rosa begins as a fairly conventional coming-of-age tale about disaffected teens (with a definite Heavenly Creatures vibe about it) before turning into something decidedly darker and more troubling. Clearly worried about the nuclear threat, Ginger nevertheless begins to use her fears as a cover for the pain she feels concerning the unspeakable betrayals committed by her loathsome father and her shallow best friend. These end-of-the-world metaphors are occasionally laid on too thick, and a character's suicide attempt proves to be a needless attempt to gild the melodramatic lily. Yet despite some narrative missteps and a brief running time (just shy of 90 minutes) that doesn't provide enough opportunities for a stellar supporting cast to strut its stuff, Ginger & Rosa should be seen simply for Fanning's exceptional performance, the sort of revelatory turn that makes us feel as if the next generation of film is in capable hands.

DVD extras include audio commentary by Potter; a making-of featurette; deleted scenes; and interviews with cast and crew members. 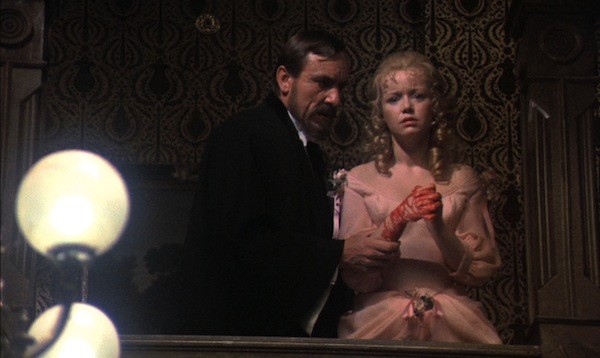 HANDS OF THE RIPPER (1971). Jack the Ripper has been the focus of pursuit in such noteworthy efforts as Murder By Decree (starring Christopher Plummer as Sherlock Holmes), Time After Time (starring Malcolm McDowell as H.G. Wells) and the criminally underrated From Hell (starring Johnny Depp as Johnny Depp), but Hands of the Ripper takes a slightly different approach: Jack has long disappeared from the scene, with any atrocities now being committed by his daughter. Little Anna watches as her dad murders her mom in front of her; cut to many years later, as the now grown Anna (Angharad Rees) is forced to toil for a phony medium (Dora Bryan) who not only uses her in fake seances but also rents her out as a prostitute. After a trancelike state leads to Anna dispatching of the ersatz psychic in bloody fashion, she's rescued by John Pritchard (Eric Porter), a doctor (and fan of Freud) who offers to let her live at his home so that he may better study her. It's not the most ideal living arrangement, as the gruesome deaths of those around him leads Dr. Pritchard to believe that Anna might be possessed by the spirit of her famous father. This latter-day offering from Hammer Films ratchets up the gore, but thankfully not at the expense of an engrossing tale that embeds its psychological context in a series of effective set-pieces. The finale, which takes place in the famous Whispering Gallery at the top of St. Paul's Cathedral, is unexpectedly moving — it's also awe-inspiring, since the lack of permission to shoot at the cathedral meant that the filmmakers had to build a replica at renowned Pinewood Studios. Hands of the Ripper has never been released on DVD in the U.S., and not only is it making the leap directly from VHS to Blu-ray, it's also arriving with a few extra seconds of footage that were trimmed from its original theatrical run.

Blu-ray extras include an excellent and detailed feature (par for the course for distributor Synapse Films) that examines every aspect of the making of the movie, including its place in Hammer history; the motion still gallery Slaughter of Innocence: The Evolution of Hammer Gore (taking us from 1957's The Curse of Frankenstein through 1976's To the Devil a Daughter); another motion still gallery, this one centering on the film; the isolated music and effects track (the score was composed by Christopher Gunning); and audio of the introduction that was added for the film's heavily censored U.S. television debut (the video portion is believed to have been destroyed in a studio fire). 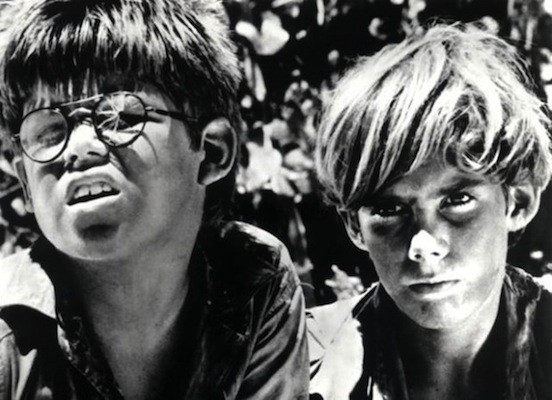 LORD OF THE FLIES (1963). Legendary stage director Peter Brook, who was to the Royal Shakespeare Company what pedals are to bicycles, occasionally dabbled in film, with this effective adaptation of William Golding's classic novel ranking as one of his most high-profile endeavors. No matter how many years one is removed from the reading of Golding's book for school, its portrait of youth gone wild — to say nothing of its vivid descriptions of the horrific deaths of two characters — remains burned in the brain, and a viewing of Brook's cinematic take only serves to bring those thoughts to the surface once again. Filmed with non-professional actors in a rough'n'tumble style, Lord of the Flies centers on a group of British schoolboys who are stranded on an island after the plane carrying them goes down. It's a perfect opportunity to create a utopian society, but instead, many of the lads mirror humankind's worst impulses, leading to jealousy, bullying and even murder. James Aubrey, who enjoyed a long if low-key career (small roles in Spy Game and The Hunger, among others) before passing away in 2010, sensitively handles the key role of Ralph, the most admirable of the boys, and he's ably supported by three lads who did not remain in the business: Tom Chapin as the vicious Jack, Tom Gaman as the soft-spoken Simon and especially Hugh Edwards as the put-upon Piggy. Incidentally, savvy superhero specialists might recognize the name Nicholas Hammond, who plays Robert — he would grow up to portray Peter Parker/Spider-Man on the short-lived TV series The Amazing Spider-Man in the late '70s.

Blu-ray extras include audio commentary by Brook, producer Lewis Allen, director of photography Tom Hollyman and editor Gerald Feil; a collection of behind-the-scenes material, including screen tests and outtakes; never-before-seen footage shot by the young actors during production; a deleted scene; a 2008 interview with Brook; a 1980 episode of The South Bank Show featuring Golding; and an audio recording of Golding reading from his novel. 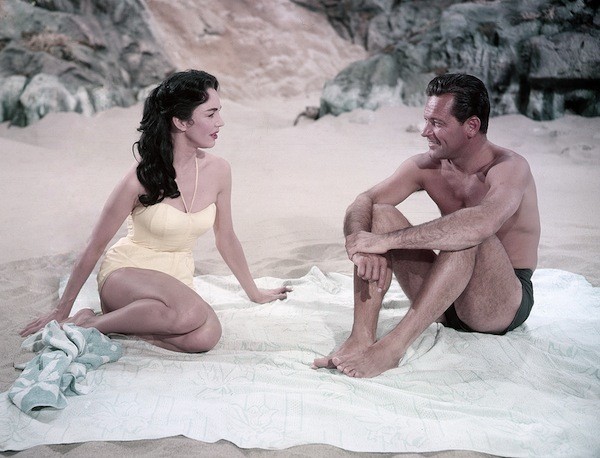 LOVE IS A MANY-SPLENDORED THING (1955). Probably more familiar to a great segment of moviegoers as the theme music that leads into the title tune at the beginning of 1978's Grease, Alfred Newman's haunting melody in Love Is a Many-Splendored Thing takes its cue from the film's smash single of the same name, a song (by Sammy Fain and Paul Francis Webster) that serves as the perfect backdrop for a lavish love story. Adapted from Han Suyin's autobiographical novel A Many-Splendored Thing, the movie version stars Jennifer Jones as Suyin, a Eurasian doctor working in Hong Kong in 1949. Because of her mixed heritage, she's a bit of an outsider to many around her, especially the strain of stuffy Brit (repped by Isobel Elsom's odious Mrs. Palmer-Jones) who wrongly assumes this England-educated foreigner has recently fled her troubled homeland of China to take up residence in this British colony. Nevertheless, she's highly respected and well-liked, and she catches the eye of Mark Elliott (William Holden), an American correspondent assigned the Asian beat. Suyin swore that after the death of her husband, she would never love again; for his part, Mark is married, but he and his wife have been separated for years. Despite the various roadblocks, Mark and Suyin engage in a grand romance, a respite from the cultural turmoil and threats of war that surround them. Holden and Jones are so good together that it's easy to forget they did not get along behind the scenes (Jones reportedly didn't get along with anyone on this film), and it's long been noted that she notoriously ate garlic before every make-out moment with her leading man. Still, they punch across the sweeping passion of this visually dynamic CinemaScope production, which is absolutely beautiful to behold on Twilight Time's immaculate new Blu-ray release. Nominated for eight Academy Awards (including Best Picture and Best Actress), this won three awards for Best Score, Best Original Song and Best Color Costume Design.