Harassment, bloggers and money: How political nastiness works in Raleigh

Recent sexual harassment charges at N.C. Democratic Party headquarters are a prime example of why most Americans are turned off by politics. 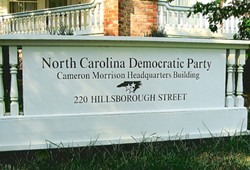 There's a good reason most Americans are turned off by politics and politicians. Actually, there are several good reasons — just look at the shape the country's in. But it's more than just economics. Surveys regularly show that voters are disgusted with the down-and-dirty attacks and tactics that dominate what passes for political discourse in the U.S. The recent flare-up of nastiness surrounding sexual harassment charges at N.C. Democratic Party headquarters is a prime, instructive example.

I want to be clear about one thing: If Jay Parmley sexually harassed staffer Adriadn Ortega, as the latter claimed, then it's a good thing that Parmley is gone from his job as executive director of the state's Democratic Party. As others have noted, we may never know exactly what, if anything, happened between the two men. But even a passing glance at the available facts — such as staffer Sallie Leslie saying she cringed whenever Parmley approached Ortega's workspace because of his "unsolicited attention" — look bad for Parmley. At the same time, the way the story came to light is yet another instance of the kind of slimy backstabbing that voters say they hate.

Rumors of a firing and hushed-up settlement over accusations of sexual harassment at Democratic headquarters had swirled around Raleigh for months, but the capital city's press corps sat on it. Now conservatives are asking why they waited. The answers to that question vary, but it's all too true that staff cutbacks at media outlets, particularly newspapers, have left them unable to pursue every juicy lead; it also has made reporters more dependent than ever on cultivating access to people with power in order to glean information. Stepping on the feet of valuable sources, particularly in these times, isn't something done lightly and without concrete evidence.

Another reason the media sat on the rumors for months is that, frankly, they're often slow on the uptake. Prime example: the national media has been awash lately in stories about the enormous influence of conservative corporate lobbying group the American Legislative Exchange Council on GOP-controlled state legislatures, including North Carolina's. Considering that one of the key people behind ALEC's influence in North Carolina is the omnipresent N.C. GOP Sugar Daddy Art Pope, you would think that the state's mainstream media would perhaps, just maybe, report on the controversy. If you keep up with the news, you know that's not happening.

Maybe the state's mainstream media is laying off ALEC because they're embarrassed that they were essentially yanked out of their lazy habits and pushed into reporting on the Parmley fiasco by the Civitas Institute, a right-wing think tank bankrolled by, you guessed it, Art Pope. Civitas got ahold of emails exchanged by state Democratic executive committee member Watt Jones and party chairman David Parker, in which Jones fretted about the effect of the settlement deal on the party's candidates in November. Civitas' people saw an opportunity to smear the Dems with a gay-harassment story during a big fight over Amendment One, and thus the emails were apparently passed along to the Daily Caller, an online blog run by conservative cartoon character and pundit Tucker Carlson, who also spread the news. Then, WRAL radio in Raleigh and the News & Observer picked up the story, and here we are.

Some Democratic diehards are trying to place the blame for their woes on the conservative bloggers who broke the story, but that's ridiculous. Rest assured that if the N.C. GOP had fired and tried to buy off a staffer who had made equally serious charges, liberal blogs and media in North Carolina, including Creative Loafing, would have been all over it like sauce on ribs. That's how it's done these days, and who can blame voters for hating it? (If you think the sleaze-mongering around this issue has stopped, then you must not have heard about Parmley's former girlfriend saying he gave her HIV. No kidding.)

Too much will happen between now and November for the Parmley issue to have an impact. But if his actions, and the Democrats' sorry response to them, cost the LGBT community a victory on May 8, I hope for Parmley's sake that he doesn't run into any gay-rights activists soon after. Voters then may see just how nasty politics can get.