Iconic singer finds inspiration from others 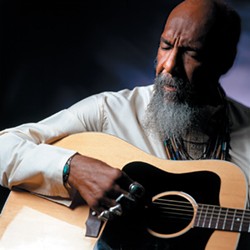 Forty-one years into his recording career, the iconic folk/soul singer Richie Havens still sees himself as being a song interpreter -- just as much as he sees himself as a songwriter.

Indeed, in concert, he often delivers Haven-ized covers of Bob Dylan's "All Along the Watchtower," The Who's "Won't Get Fooled Again," Joni Mitchell's "Woodstock," Van Morrison's "Tupelo Honey" and George Harrison's "Here Comes The Sun," among others.

He's even recorded some of those tunes for posterity's sake.

"Yes, I definitely think of myself as an interpreter as much as a writer," says Havens, who comes to the McGlohon Theater on Friday, Feb. 8. "And I feel like I don't really choose those songs -- it's more like they choose me. I guess it goes back to when I first moved to Greenwich Village" -- at the dawn of the early-'60s folk boom that made such an imprint on the direction popular music would take in the decade that followed.

"I started off with this notion of trying to learn a few songs I first heard in the Village, songs that inspired me to want to play folk music," says Havens during a phone interview from his N.J. home. "I always feel like, when I do other peoples' songs, I can communicate something that might be different than what the original songwriter had in mind.

"At this point, my albums are about 45 percent my own songs, and the rest are covers, or songs written by friends of mine who are not well known," says Havens, who recently completed a new album that will be released in March entitled Nobody Left to Crown. "The title track is something I first sang 25 years ago, but wanted to record it again, because I now feel like I'm coming from a different place than I was way back then." The disc also includes a recording of "Won't Get Fooled Again."

Havens is such a spontaneous performer that the decision to first perform the Who song in concert a couple of years ago occurred to him in a split second. "I was singing [Dylan's] 'Maggie's Farm,' and I had seen the Who in concert a few weeks earlier, and the song just came to me -- so I went right into it, and then came back to 'Maggie's Farm.' And the crowd really responded enthusiastically, so it seemed like I had to get it down on tape."

The upcoming disc is the third album that he's recorded in the last few years since "something different began happening to me, in terms of how I write," he says. "I found these melodies coming to me, and as I kept writing more songs, I knew something was different." What was different, as it turns out, is that "all of those songs were in keys I had never sung before, and it was really interesting to figure out what they were. It was no wonder I sang a little different for a while," he adds with a laugh. The new keys were "G, and F, A minor and C," shares Havens.

"It really opened up a whole new musical universe for me, to be able to explore these new keys, which allowed me to continue working mostly with an acoustic guitar without re-writing the past." The new disc is mostly just his voice and his acoustic guitar, says Havens, but the judicious use of cello and supple electric guitar also adds some texture here and there. That's also the configuration Havens prefers for his live shows.

"Onstage, I'll have Stephanie Winters on cello and Walter Parks on guitar -- I think they really give my songs a lot of atmosphere." Havens has been working with the pair for six years. Before that, Havens had the same guitarist, Paul Williams, for 25 years. "Paul also played with me at Woodstock," recalls Havens.

Ah, Woodstock -- the event that most people still think of when they hear Havens' name. His intense, spontaneous performance of "Freedom" at that show is still the song that casual fans still most closely associate with Havens.

"Yes, I suppose that's true," says Havens with a laugh. "That was quite an experience, though -- that event was the ultimate 'happening.'"