Hope amidst despair in Burma

By Michael J. Solender @mjsolender
click to flip through (5) 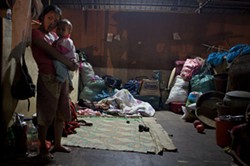 David Johnson looked fatigued sitting across the table at Starbucks. Only back in the country for three days, Johnson had returned from a several-thousand mile journey to the Burmese state of Kachin. There, nearly 75,000 ethnic Kachin people have been displaced from their homes by the army and live in squalid conditions in makeshift camps along the Chinese border.

Johnson, 36, of Matthews, was there to photograph human-rights violations. Any Democratic overtures made by the government in recent months, including the recent celebrated election of civil-rights advocate and opposition leader Aung San Suu Kyi to parliament, contrasts with the life-threatening situation many in the country face.

Johnson, only one of a handful of Westerners to receive access to the camps, spoke directly with opposition military leaders and refuges as an invited guest of the Kachin Independent Army. It was the army who facilitated his clandestine crossing of the Chinese border into Burma to help tell their story.

Strife wasn't all he captured.

One series of photographs is full of smiling teens in a makeshift classroom with their career dreams — "teacher," "doctor" and "scientist" — written on a chalkboard.

"When at the refugee camps in Kachin, I wanted to capture the beauty, hope, smiles, and resilience of these very proud people," Johnson said. "I also want to show what the next generation of Kachin people aspires for."

He will share a selection of photographs, along with a detailed narrative, May 17 through June 30 at The Art Institute of Charlotte.

JOHNSON IS NO STRANGER to humanitarian missions. The former English teacher at Providence Day School knows the power that images can covey when telling stories of people in situations unimaginable to most Westerners. Johnson said that it was his empathy for others, particularly oppressed and persecuted people across the world, and an outgrowth of his Christian faith that led him to found the Matthews-based nonprofit, Silent Images (http://www.silentimages.org/)

For eight years, Silent Images has documented humanitarian crisis' around the world. The organization's mission is to find stories of hope in the midst of oppression and use photos and videos to educate, inform and inspire activists into action. Johnson has documented some of the world's most notorious humanitarian crisis, such as those in Darfur and Sudan, and even written two books as fundraisers for those areas.

"What is so important to me about being a photojournalist is connecting these images to show real people and the real impact behind the situations they are facing," he said. "Pictures really can convey so much more emotion and connect with people on a visceral level."

His first book, Voices of Sudan, is a photo essay full of inspiring stories and powerful photos that he gathered during three trips to a Darfur refugee camp in Sudan. All of the profits go toward wells, food and medicine for the Sudanese. Voice of Beauty, Johnson's second photo essay, unveils the prevailing beauty and strength of women and girls in developing countries that is so rarely celebrated. Proceeds from the book finance micro-loans for women and education in Africa.

Johnson eschews questions regarding the personal motivation behind his work, other than to say he feels an obligation to broaden awareness of these issues and pay attention to oppressed peoples' plight. He says he prefers to let his work speak for itself and is quick to praise his administrative staff and army of photographers.

"Telling stories like those of the Kachin refugees is at the very core of the mission of Silent Images," said Johnson, a slight man with steely intensity. "We feel an incredible burden in accurately sharing the situation of the people we work with in our efforts to bring aid and raise awareness. People need to recognize that in spite of the recent apparent progress towards democracy being made in Burma, there is still a military culture where in places like Kachin, ethnic people are being displaced from their homes, persecuted for their religious beliefs, subjected to physical abuse, and are having their lives destroyed. What is different about this situation is that no one is telling this story."

BUT JOHNSON DOESN'T have to visit a foreign country to satiate his need to help others.

In 2009, he worked with local homeless children through a photography class he taught at Nexus Global Serve, a Charlotte nonprofit supporting at-risk communities. The class project, "Charlotte Through Our Eyes," became an exhibit at the Levine Museum of the New South.

This summer will mark the third year Silent Images has offered photography classes to local homeless children served by A Child's Place, a local nonprofit trying to erase the impact of homelessness on kids and their education.

Silent Images chose Charlotte for a unique and inspirational project designed to recognize and celebrate local heroes. In July, the Levine Museum of the New South will host a special exhibition featuring "My Silent Hero," Charlotte's behind-the-headlines, unsung heroes captured by anyone with a camera and an interest in sharing someone's story with the world. Johnson counts about 100 submissions so far. He encourages those interested in participating to visit project's website (http://www.mysilenthero.org/).

Mike Watson is gallery curator and fashion instructor for The Art Institute of Charlotte.

"I became aware of David and Silent Images through my work as host and MC for the inaugural TEDx events held here in Charlotte," Watson said. "The work he is doing is important, and bringing awareness to it serves our educational mission here at The Art Institute. Our job as educators is to ensure we have a place for narrative expression. People can't discuss important issues if they don't know about them."