Hotel Transylvania: Worth a short stay | Reviews | Creative Loafing Charlotte
Switch to the mobile version of this page.

Hotel Transylvania: Worth a short stay 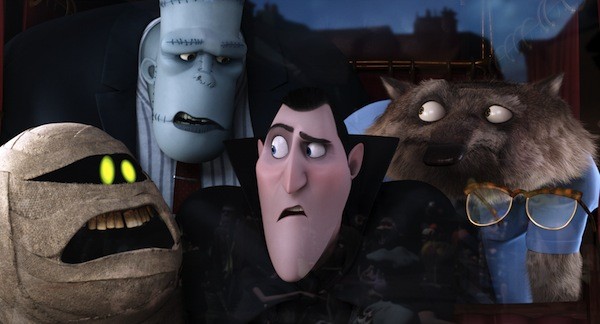 An animated feature with Adam Sandler providing the voice of Dracula sounds like strength-sapping kryptonite to anyone with a modicum of taste, but Hotel Transylvania turns out to be a fairly pleasant surprise. Admittedly, it works in spite of Sandler, not because of him, but after nine straight turkeys dating back to 2007, let's cut him some slack here, shall we?

Sandler's Count, who doesn't drink human blood because it's too fatty, wants nothing so much except to keep his daughter Mavis (Selena Gomez) away from scary humans bent on destroying all monsters. To that end, he builds a remote hotel designed to offer safety not only to Mavis but to creatures the world over, all of whom enjoy visiting the expansive establishment. Whether he's addressing the Frankenstein monster (Kevin James), Wayne the werewolf (Steve Buscemi), Murray the mummy (CeeLo Green) or one of myriad other monsters, Dracula can confidently tell them that no human will ever be able to reach his hotel that's hidden in the middle of nowhere. But that promise gets shattered with the arrival of Johnny (Andy Samberg), a Bill-and-Ted-type backpacker who has managed to locate the castle and thinks he's found the coolest costume party ever.

With a flatulence gag and a urination gag making unwelcome appearances within the first quarter-hour, it initially seems as if viewers are in for the same sort of frat-boy nonsense that Sandler flings out with virtually all his live-action projects. Thankfully, the movie soon shies away from that position and instead manages to deliver genuine laughs: Griffin the invisible man's (David Spade) disastrous turn at playing charades; the tiny whispering skulls employed for a game of Bingo; Wayne's weary attempts to corral his rambunctious were-kids; Dracula's reply to Jonathan's query about whether a stake through the heart really can kill a vampire ("Who wouldn't that kill?"); and so on. The central plot thrust — Mavis, who's turning 118 (still a teen in vampire years), wants to see the world while Pop Drac wants to protect her forever — is nothing special, but when a spoof's expected cheap shot at the Twilight saga actually warrants a chuckle, that's generally a good sign that other laughs can be scared up as well.