How are you supposed to use hand sanitizer? | Straight Dope | Creative Loafing Charlotte
Switch to the mobile version of this page.

How are you supposed to use hand sanitizer? 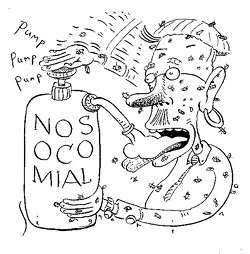 Hand sanitizer dispensers have been appearing in restrooms in my area. Recently, my employer installed one in the men's room near the sink. It's unclear to me if it's intended as a substitute for hand washing or a supplement. Would you please enlighten your readers concerning the proper use of this stuff? While you're at it, does hand sanitizer really work, or is it just a fad? — Tom Meyer, Mercerville, New Jersey

You've got a point. Nobody really knows how to use hand sanitizer. Proper labeling should be mandated by OSHA, the Consumer Product Safety Commission, and the World Bank. Knowing how slowly bureaucracies work, however, I've drawn up the following emergency instructions. The hand sanitizer industry should feel free to post this above every dispenser, so that the public may be informed.

"HAND SANITIZER — INSTRUCTIONS FOR USE

"2. The idea is that the sanitizer will evaporate without rinsing or towels, making it possible to rid your hands of germs when there's no bathroom in the vicinity. Studies say this stuff works as well as soap and water. However, we aren't claiming it works better than soap and water (or anyway most of us aren't; see below). In other words, if you're a corporate facilities manager putting hand sanitizer in the washrooms next to the sinks, you're unclear on the concept, schmuck.

"4. Sanitizing your hands is different from cleaning them. If you're covered with grime after changing the crankshaft on the Maserati, you're going to want soap. As it happens, the maker of Purell, the leading hand sanitizer, also makes a grease-cutting semiliquid soap called GoJo that's popular with mechanics. In short, our industry is there for you regardless of your hand cleansing needs. .

"5. Some may think hand sanitizer is solving a nonexistent problem. We beg to differ. Suppose you're a politician. We saw a story in the New York Times about one enthusiastic public servant who shook 13,392 hands in eight hours. God knows how many of those hands were attached to people with colds, the flu, or amoebic dysentery. This individual has good reason to use hand sanitizer. Heck, we could make decent money supplying product just to him.

"6. If you have the feeling that bugs are crawling all over your body, hand sanitizer is not what you need. Nor, most likely, are tweezers and a little box.

"7. Another place where hand sanitizer has its uses is in hospitals. An all-too-common problem in hospitals is you go in with one ailment, catch a different one, and die. Studies have shown that a rigorous program of hygiene by hospital staff including use of hand sanitizer between patients significantly reduces so-called nosocomial infections.

"8. Isn't that a great word, nosocomial? Doctors of course could just say "hospital-caused." However, everybody would know then what they meant.

"9. Getting back to our subject, let's suppose you're not a politician, health care worker, portapotty user, primary school teacher , or other high-risk individual. Do you still need to use hand sanitizer? In our opinion, yes, because we're turning a very nice profit here. The hand sanitizer business has grown from next to nothing in the 1990s to a projected $400 million annually by 2015. So what if this nation's heavy manufacturing capability by and large has been exported to Asia? We can all make hand sanitizer instead.

"10. Chances are this product contains alcohol — generally 120 proof and up. It's not, however, the kind of alcohol you're supposed to drink. If you do anyway, and we know from the medical journals that some are tempted, be aware that chugging a 450-milliliter bottle is a ticket to the ICU.

"11. If you want to get into dueling research papers, you can make the argument (as our colleagues at Purell do) that hand sanitizer kills germs soap and water doesn't. It's also true alcohol-based sanitizers are ineffectual against some bugs, such as the one that causes botulism. Therefore, logically you should use both sanitizer and soap, and this may in fact be worth doing if you're about to perform open-heart surgery. However, let's be blunt. The chief driver of hand sanitizer popularity isn't medical necessity but fear. Big spikes in sales typically stem from media-fueled paranoia about the epidemic du jour, such as the 2009 panic over H1N1 flu. Sales rose 70 percent, even though the average American's chances of getting the disease were less than one in a million.

"12. Then again, if you feel the need to sanitize every time you touch a doorknob — and we're looking at you, Mr. or Ms. borderline compulsive who wants dispensers installed in the subway — don't expect us to say you can't."