How the Government got Involved 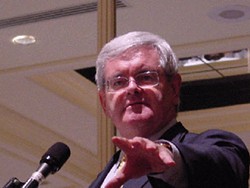 In 1995, one year after the Newt Gingrich Revolution brought a wave of conservatives to political office around the country, then-NC Representative Robin Hayes sponsored a bill that replaced North Carolina's K-12 comprehensive sex education curriculum with an "Abstinence Until Marriage" program. The state lets local school systems go beyond the abstinence message -- allowing more information about the effective use of birth control, for example -- but only after the school systems have held public hearings. That's what happened in Mecklenburg County.

In 1996, Congress mandated abstinence-only sex education as part of the Personal Responsibility and Work Opportunity Reconciliation Act -- better known as welfare reform. It was an attempt by the Gingrich Congress not only to eradicate welfare but to force conservative standards of sexual morality on low-income Americans.

The law details eight principles for "abstinence education," among them that "a mutually faithful monogamous relationship in the context of marriage is the expected standard of human sexual activity." (Three years later, Gingrich divorced his second wife, Marianne, after revealing he had been carrying on a six-year-long extramarital affair with a House clerk 23 years his junior.)

By late 1998, every state had received funds for an abstinence-unless-married curriculum from the federal government. California decided to refuse the funds when officials there realized the new federal requirements would not allow them to give extensive contraceptive information or mention that condoms reduce the risk of AIDS. Richmond, VA, withdrew from participation, too. Its health director said the program "did not help children who were already sexually active, or gays and lesbians." Even more surprising was action by the Charleston County, SC, school board, which also voted against accepting the federal money. The school board chairman there said, "Let's not live in a fantasy land" and "play Russian roulette with the lives of our students."

Since 1996, the United States has committed more than a billion dollars (through both federal and state matching funds) to abstinence-only-until-marriage programs. Additional funding proposed in President Bush's most recent budget would bring the total to $205.5 million for fiscal year 2006.

Rep. Henry A. Waxman of California recently released a lengthy report showing that many federally funded abstinence-only education programs use curricula that distort information (i.e., lie) about the effectiveness of contraceptives, misrepresent the risks of abortion, blur religion and science, treat stereotypes about girls and boys as scientific fact and contain basic scientific errors.

Currently, there is no federal funding for comprehensive sex education in public schools. However, a recent bill titled The Responsible Education About Life Act (the REAL Act) was introduced in both the House and Senate. It would provide funding to states for medically accurate, age-appropriate, comprehensive sex education in schools -- education that includes information about both abstinence and contraception from both a values and public health perspective.

Rep. Sue Myrick is on the subcommittee studying the bill in the House, and Sen. Richard Burr is on the committee taking up the legislation in the Senate. Neither Myrick nor Burr returned calls asking for their positions on the bill. Sen. Burr's office didn't know he was on the committee in question.