Hugo, The Town among new home entertainment titles | View from the Couch | Creative Loafing Charlotte
Switch to the mobile version of this page. 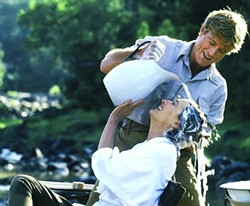 HUGO (2011). Movie mavens who were startled by the fact that Martin Scorsese had elected to direct a family film when he's exalted for his string of hardcore crime flicks clearly know little about either the man or his achievements. Scorsese has hopscotched between genres far more often than he's given credit for — the costume drama The Age of Innocence, the religious epic The Last Temptation of Christ and the black comedy After Hours represent just a sampling — and when he's not helming motion pictures, he's often championing the cause of film preservation. Scorsese has always been a student of film as much as a teacher and practitioner — how I love to hear him passionately discuss classics of cinema! — and with Hugo, he manages to incorporate all facets of his persona. Even more so than The Aviator, this adaptation of Brian Selznick's The Invention of Hugo Cabret is a product steeped in cinema lore, drunk on the fumes of a bygone era yet canny enough to channel its nostalgia through modern innovations. Set in a Parisian train station in the 1930s, the story concerns itself with young Hugo (Asa Butterfield), a parentless child who tends to the building's giant clock while constantly avoiding the grasp of an inspector (Sacha Baron Cohen) hellbent on sending him off to an orphanage. Connected to his late father (Jude Law in a small role) by an automaton that needs repairing, Hugo steals the parts needed from an elderly man named Georges Méliès (Ben Kingsley), who runs a toy store in the station. Eventually caught by the ill-tempered gent, Hugo becomes drawn into Méliès' life, befriending his ward Isabelle (Chloe Grace Moretz, of Kick-Ass/Hit Girl fame), learning about his former life as a film pioneer, and discovering the key — literally — that binds past and present together. Despite registering as a glorious celebration of Méliès, Scorsese hasn't merely made an ode to cineasts; rather, his picture is a moving exploration of the manner in which individuals seek out love and companionship in an effort to form their own version of a nuclear family (every character, even Cohen's bumbling inspector, wages a war against loneliness). This placed #2 on my year-end 10 Best list, below only The Descendants; the Academy likewise found favor with it, nominating it for 11 Oscars (including Best Picture) and handing it five.

Blu-ray extras include a making-of featurette; a piece on Georges Méliès; a look at the Oscar-winning visual effects; and a discussion with Cohen about his role.

JOHNNY ENGLISH REBORN (2011). The 2003 release Johnny English took a beating from most critics, but finding that it capitalized on Rowan Atkinson's abilities better than his Bean movies — and greatly preferring it over those overrated Austin Powers films — it managed to squarely hit my funny bone, thus earning a hearty recommendation. Johnny English Reborn doesn't earn the same measure of respect, but it does contain almost enough laughs to make it worth a sale price. Falling a tad short, I would suggest adding it to the Netflix queue instead. As before, Atkinson plays the British agent who sees himself as James Bond but instead comes across as a Limey version of Inspector Clouseau. The comedian has surrounded himself with good actors (Rosamund Pike, Dominic West and, for those wondering whatever became of The X-Files' Agent Scully, Gillian Anderson), but they're not funny actors, thereby robbing Atkinson of a crucial support system. In the 2003 original, English's sidekick was humorously played by Ben Miller and his nemesis was hilariously played by John Malkovich; here, Atkinson is the show, the whole show and nothing but the show. It's a one-man act that he mostly pulls off, but a few more bright gags and a little less reliance on plot mechanics swiped from The Manchurian Candidate would have resulted in a more clever caper.

OUT OF AFRICA (1985). Meryl Streep just won her third Academy Award for a performance that wouldn't even rank in her Top 20. Rather than The Iron Lady, the Academy should have awarded her that elusive third Oscar long ago — specifically, for her splendid performance in director Sydney Pollack's lush and romantic epic. Screenwriter Kurt Luedtke gracefully weaves together material from various novels by and about Karen Blixen (who wrote under the name Isac Dinesen), detailing how the young Karen Dinesen moves from Denmark to Kenya in 1913 to marry fellow Dane Bror Blixen (an excellent Klaus Maria Brandauer) and live on a coffee plantation. But his incessant womanizing, coupled with the minimal time he spends at home, leaves her lonely and frustrated. She eventually forms great friendships with the Kenyan locals as well as various foreigners, and she ultimately enters into a passionate love affair with British hunter Denys Finch Hatton. All-American Robert Redford plays Hatton, and while he doesn't even try to feign an English accent (reportedly, Jeremy Irons badly wanted this part), his star persona nevertheless makes him suitable for this larger-than-life role. Still, he's almost a footnote when singing this film's praises: Streep's exquisite turn, Sydney Pollack's measured direction, David Watson's picturesque cinematography and John Barry's gorgeous score. Nominated for 11 Academy Awards, this earned seven, including Best Picture and Best Director ... but no Best Actress, alas.

Blu-ray extras include audio commentary by Pollack; deleted scenes; and the retrospective featurette Song of Africa.

THE SKIN I LIVE IN (2011). Step aside, children: It's time to let the adults come out and play. Anyone not interested in tracking the romantic travails of the Twilight and Like Crazy hipsters will take delight in the disturbing relationships coursing through The Skin I Live In, the latest blaze of originality from writer-director Pedro Almodovar. Antonio Banderas, who starred in five Almodovar films before making the leap to American cinema, reunites with the Spanish auteur for this patently bizarre drama in which a plastic surgeon, haunted by the fiery car crash that engulfed his wife, spends years attempting to invent a durable, synthetic skin. With his assistant (Marisa Paredes), he experiments on a lovely young woman (Elena Anaya) held captive in his home, an emotionally fraught situation made even more explosive by the arrival of a freak (Roberto Alamo) from their collective pasts. Almodovar is known for writing more meaty roles for women than just about anyone else out there, so viewers might be startled at some of the horrors endured by Anaya's character. But by the end, it all makes sense — it's the journey itself that provides the unexpected, often queasy twists and turns. Let's just say that the recent Shrek spinoff isn't the only Antonio Banderas film that could have been released with the title Puss in Boots.

Extras in the Blu-ray & DVD Combo Pack include a making-of piece; a Q&A with Almodovar; and a look at the film's New York premiere.

THE TOWN (2010). While The Town didn't quite match the giddy pleasures of Gone Baby Gone (which, after all, was second only to No Country for Old Men on my 10 Best list for '07), it aptly illustrated that writer-director Ben Affleck didn't have to contend with either the label of "beginner's luck" or "sophomore jinx." A crackling drama with a fine sense of both spacial relationships (thank Affleck the director) and character relationships (thank Affleck the writer), this adaptation of Chuck Hogan's novel Prince of Thieves (co-scripted by Peter Craig and Aaron Stockard) is set in a section of Boston known for producing more bank robbers than anywhere else in the country. One of these heist-happy fellows is Doug MacRay (Affleck), who leads his three accomplices (the most volatile played by The Hurt Locker's Jeremy Renner) on a caper that results in the masked bandits briefly taking a hostage, bank employee Claire Keesey (Rebecca Hall). Electing to keep tabs on Claire to insure she doesn't get too chummy with the FBI (repped by Mad Men's Jon Hamm) and reveal anything that might incriminate the gang, Doug strikes up a friendship with the unsuspecting woman, a camaraderie that quickly turns into love. A genre flick like this can't avoid all the clichés, but it manages to sidestep some of the biggest ones; at any rate, it's the little moments that make this stand out. Affleck's work is completely self-assured: The film can quickly shift from funny to frightening, and it plays out in ways not entirely expected. Renner earned a Best Supporting Actor Oscar nomination for his work; truth be told, the nod should have gone to Pete Postlethwaite, chilling as a neighborhood kingpin whose wiry frame and low voice belie his demonic disposition. Tragically, Postlethwaite passed away from cancer a few months after the film's debut, at the age of 64.

The Blu-ray & DVD Combo Pack with UltraViolet Digital Copy contains the theatrical version (125 mins.), the extended cut (150 mins.) and the extended cut with an alternate ending (153 mins.). Extras include audio commentary by Affleck on all three versions; the new featurette The Town: A Director's Journey; and a six-part making-of featurette. The set also comes with a 48-page photo book; a letter from Affleck; a poster-size map of Charleston with details on the film's crime scenes; and various film prop reproductions (including FBI mug shots and a rub-on tattoo).

Tags: View from the Couch, Hugo, The Town, film, DVD, Blu-ray, review, Out of Africa, The Skin I Live In, Johnny English Reborn