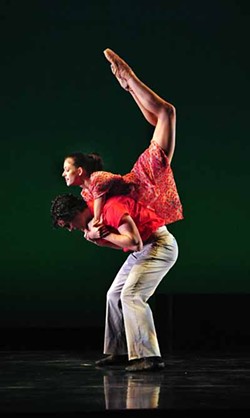 Visually and musically, this Booth Playhouse anthology is as stunning as ever, with new NCDT stars stepping to the fore. Most encouraging of these is Anna Gerberich, now in her fourth season with the company at the ripe old age of 19. Even before she takes over the title role of Juliet, she emerges as the beguiling romantic lead opposite David Ingram in the world premiere of Sasha Janes's You're So Fine. Using three songs by Paul Kelly, Janes puts his own little crimp in the traditional sequence starting with "Boy Meets Girl." This one doesn't droop to a finish with the usual maudlin boy-loses-girl. We exit with a wallop -- literally -- after "Boy Does Something Really Stupid!"

It's Diamond who droops in Uhh! With hilarious results. Entropy hits "happily ever after" with a vicious body blow, leaving an apparently married couple, Janes and Kara Wilkes, in some deep doldrums. Set to excerpts from Schubert's posthumous piano sonata, Uhh! is the perfect antithesis to those big, blithe (and boring) Paul Taylor pieces and their unabated energy. Why, it's all Diamond and his dancers can do to come onstage and take their bows. Hand that man a Red Bull.

After partnering briefly with Gerberich in Juliet as her Romeo, Joseph Watson gets a meatier role -- and a tighter, more flattering costume -- in Rhoden's cryptic Verge. Addul Manzano, so dominant in the Balanchine slate back in September, remains prominent here. Before he aspires to Watson's perfection in Verge, he's the prisoner in The Chair, with Ingram as his nemesis. My prescription for this intriguing new Diamond begins with a dose of grimmer, more topical music -- and recommends more torment from Manzano's interrogator.

Traci Gilchrest hasn't vanished either. She's startlingly savage and vulgar -- in a comically elegant Capulet way -- as Juliet's mom, and she brings her signature elan to a couple of the key segments in Verge.

Amid a dense weekend schedule that packed six shows into the space of 52 hours, I was able to peep in on Actors Scene Unseen and their venture into Halloween latenight, The Turn of the Screw. I had to content myself with understudy Meg Wood as the governess in Henry James's celebrated ghost yarn, replacing Amy Laughter for that one performance. Wood, as followers of her work could have predicted, was merely outstanding.

The real news was Aaron White, making his Charlotte debut in all the other roles at Duke Energy Theatre. White soared over the borderlines that separate one gender from another -- and the living from the dead.