Behind the mayhem of Charlotte's most "madd-cap" morning show

It's 5:30 a.m. on a Wednesday morning, and the crew behind Power 98's "No Limit Larry and the Morning Maddhouse" show is flipping through newspapers and surfing the Web in search of stories that will catch their listeners' attention. This is a typical morning for the Maddhouse. While many of us are deep in the REM phase of sleep, they're up prepping for the day's show. 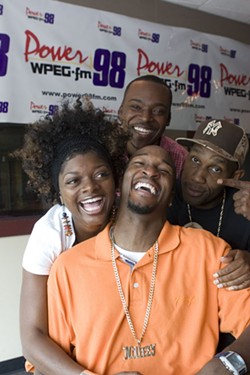 With a hint of sleep in his voice, Larry Mims, known to Power 98 (aka WPEG, 97.9-FM, "Charlotte's No. 1 for Blazin' Hip-Hop and R&B") listeners as No Limit Larry, is walking around the studio rapping a mixture of Young Jeezy, Jay-Z and the Shop Boyz. This is his morning ritual. No coffee. No doughnuts. No Red Bull. Just hip-hop, straight up. This is how he earned the title in the clubs and in the streets as the Carolina's Crunkest DJ -- because even at 5:30 a.m. he's all the way live. "No Limit keeps it crunk ... all the time," says Maddhouse co-host, Janine "J.D." Davis. "He's always rapping -- from the time he comes in the studio to the time he leaves."

J.D. on the other hand, is a bit more reserved when she comes to work, or as the Maddhouse's in-house comedian Tone X puts it, "She's down right persnickety." And No Limit adds, "You can normally tell what type of night J.D. had by the way she comes in the studio. If she had a good night, she's smiling. If she had a bad night, she takes it out on us."

While No Limit and J.D.'s morning moods lay at opposite extremes, Tone X's mood rests somewhere in the middle ... or at least that's what he'd like to think. "I'm a morning person because I used to be in the military and am used to getting up early," says Tone, implying that he's the most even-tempered in the group. But of course No Limit and J.D., who are known for cracking on everybody (and their mamas), aren't going to let him get by with that one. "Tone is very temperamental, especially if he and his girlfriend had a falling out," says J.D. "He just won't talk ... he'll go to the back and moan about it."

The way the Maddhouse puts each other on blast is reminiscent of siblings who playfully bicker back and forth all day. But while No Limit, J.D. and Tone may be like brothers and sisters, Church Boy, the co-producer and fourth member of the Maddhouse, is like a cousin who comes over every now and then to put in his two cents worth. In other words, spending time with the Maddhouse is like spending time with the typical American family -- they're a little dysfunctional, but it's nothing but love.

"A little dysfunctional? We're a lot dysfunctional," says No Limit. "We're like a bunch of kids living in a house by ourselves."

But somewhere in the midst of their dysfunction, the Maddhouse team discovered a formula for success that has won them numerous awards and made the show the No. 1 urban morning radio show in the Carolinas. "I think our show is successful because of the chemistry we have off the air, as well as on," says J.D. "People can feel that."

No Limit agrees with that, but also has his own theories as to why their show is so popular -- because of its realness. "I go to the barbershop ... the beauty shop ... it's fresh in there all day because it's not sugar-coated," he says. "That's where I come up with my ideas ... from people in the community."

It's now 5:45 a.m., five minutes before "No Limit and the Morning Maddhouse" goes live. This is when things start to get interesting. They all take their places. J.D. gets her laptop set up so she can surf the Web during the show to keep listeners current with what's happening in entertainment. Church Boy grabs a spot at the mic to sit-in with the crew during the first few minutes of the show before he dashes into the control room to make sure everything runs smoothly on the technical side. And No Limit and Tone slide into their chairs, put on their headphones and get ready for the ride.

They all seem at ease behind the mic. But then again after years of working in the industry, this is undoubtedly natural to them now. They all have tales to tell about how they landed their current gig.

No Limit got his start while working at the campus radio station as a student at Johnson C. Smith University. The Charlotte native then took what he learned and got an internship at Power 98 with former afternoon host Nate Quick. From there he landed a position as producer of the afternoon drive air shift, and shortly after graduating with a bachelor's in communications, Power 98 offered him a position as co-host of the "Afternoon Zoo Crew" and later as host of the evening show called "The Battleground." With years invested at Power 98 and consistently high ratings, it was a natural fit for him to get the highly sought-after position of morning host.