Or is the next Dylan or Lennon on the horizon? 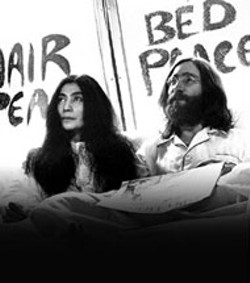 Ever since John Lennon and Yoko Ono led a raucous crowd of flower-toting, peasant-bloused hippies in a pot-hazy chorus of "Give Peace a Chance," it seems to have been a pop axiom: When the United States goes to war, the musicians begin calling for peace.

But not this time. At least, not yet.

But is it too early to throw in the towel? Long before Lennon and Yoko ever climbed into bed for peace, Bob Dylan, Joan Baez and a host of other folk artists were questioning the status quo and warning of the coming disaster in Vietnam.

Which begs the question -- where will the next protest music come from? Who will be the new political Dylan, Lennon, Clash, Public Enemy or Rage Against the Machine?

So far the signals are vague. On May 4, the Plea For Peace tour stops at Tremont Music Hall, featuring bands like Cursive, Denali, Darkest Hour, Planes Mistaken for Stars and others. But none of these groups are overtly political in their music. And though the organizers are claiming that in this pivotal election year "music will take on a huge role in the electoral process," it remains to be seen how this is anything more than wishful thinking.

Aside from the furor over Steve Earle's "John Walker Blues," and the maelstrom over a Dixie Chick's off-the-cuff insult to our Vietnam War-avoiding president, the 9/11 after-effects seem to have left mainstream musicians loathe to protest against the deepening quagmire of Iraq -- you might even think the two events were still related, despite the preponderance of evidence to the contrary.

There are exceptions to our national political apathy, of course, but most seem to be brief moments in records that otherwise avoid protest topics as a rule.

Even locally, it's rare to hear Charlotte's top acts tackle the topic -- though there are, again, exceptions.

Opposing war hasn't always been a popular position, but it has created some great music. During the Vietnam era, songs like Edwin Starr's "War," Jimi Hendrix's "Machine Gun," Funkadelic's "Maggot Brain" and "Wars of Armageddon," Jimmy Cliff's "Vietnam," Country Joe and the Fish's "Fixing to Die Rag," Creedence Clearwater Revival's "Fortunate Son" and "Have You Ever Seen the Rain?" and Marvin Gaye's "What's Going On" turned defiance into a raging, soaring, brave and melancholic gesture of community.

Perhaps the most overtly political rock band -- The Clash -- produced some of the most incendiary rock & roll ever made.

Even our allegedly apathetic post-Lennonist generation has occasionally extended the tradition. When Bush Senior sent troops to Kuwait in 1991, rappers Ice Cube and Paris trained their verbal guns on the White House in "I Wanna Kill Sam" and "Bush Killa," while Bad Religion and Noam Chomsky split a 7-inch into a no-war-for-oil seminar. For a few years it seemed Rage Against the Machine would carry the torch, but the band finally disintegrated beneath the usual rock & roll cliches.

But since antiwar music has become a time-honored balance to "bomb "em all and let God sort "em out" fervor, you wonder why, since Sept. 11, have we heard so little new music protesting Bush Junior's war on evil?

In fairness, plenty of acts remain politically conscious: folkie Ani DiFranco, punk bands Anti-Flag, Toxic Narcotic and Strike Anywhere, and hip-hop acts Dead Prez, The Coup and our old friend from Public Enemy, Chuck D, wear their politics on their sleeves. But these acts fly under most of the country's radar.

Of the bigger artists, the ones who were once outspoken peaceniks seem to have lost their certainty, or even switched their position. For years, U2 led crowds in chants of "No more war!" during their concerts. But during their surrealistic Super Bowl half-time performance two years ago, they offered deep ambivalence -- a stark display of the names of Sept. 11 victims set to "Beautiful Day."

Neil Young's "Ohio" memorialized Kent State University's murdered antiwar protesters of 1970; his "Cortez the Killer" condemned imperialism. Now we find him on his post-Sept. 11 cut, "Let's Roll," singing, "Let's roll for freedom; let's roll for love, going after Satan on the wings of a dove."

We've seen dozens of acts quietly bury their edgier songs. We've seen radio playlists rewritten so as not to "offend listeners." And we've seen Republican officials and the entertainment industry -- long divided over "traditional values" issues such as violent content and parental advisory stickers -- bury the hatchet. Witness the recent bipartisan knee-jerk on "decency" after Janet Jackson's breast was outted at the Super Bowl (though dead bodies on the nightly news apparently aren't indecent).

The result? Not unlike the network news, there's been what a media wonk might call a narrowing of content choice. Think eagle- and flag-adorned anthologies of patriotic music, prefab benefit shows screaming CONSUMER EVENT, narrow-minded anthems like Alan Jackson's "Where Were You (When the World Stopped Turning)" and Toby Keith's "Courtesy of the Red, White and Blue (The Angry American)." Either this jingoism on the one hand and political apathy on the other is the new way of the musical world, or Keith and his ilk are "The Ballad of the Green Beret" to a "Give Peace a Chance" yet to be written.

John Schacht contributed to this story