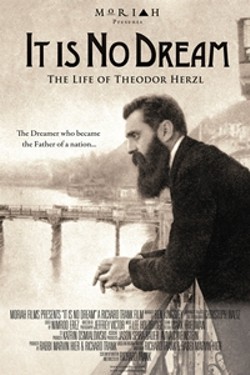 It Is No Dream: The Life of Theodor Herzl

The life and times of Theodor Herzl, father of the modern state of Israel. How Herzl, a well known journalist and playwright, an assimilated, Budapest born Jew, horrified by the Dreyfus trial in Paris and the antiSemitism he saw spreading across Europe, took upon himself the task of attempting to create a Jewish homeland in Palestine against all odds. Over the span of 8 years, Herzl organized and led a worldwide political movement that within 50 years led to the establishment of the state of Israel. The film follows Herzl as he meets with Kings, Prime Ministers, Ambassadors, a Sultan, a Pope and government ministers from Constantinople to St. Petersburg, from Paris to Berlin, from Vienna to Vilna in his quest to build a Jewish nation.

It Is No Dream: The Life of Theodor Herzl is not showing in any theaters in the area.