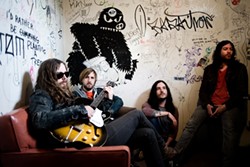 J Roddy Walston's grandmother taught him how to play piano. She showed him how to hit the right keys and notes and play familiar songs. She gave him a solid foundation. When Walston performs on stage, he shakes, pounds and hits that foundation to its core. He hammers away at the keys on his upright piano like they're drums. He jumps up and down as his long locks fan out around him, usually knocking his piano stool over in the process. As a rock band, J Roddy Walston has more in common with Jerry Lee Lewis than Coldplay.

"I see myself more as a rhythm guitarist or percussionist," Walston says. "It has to serve the song, and it's not to make me look good. I don't love when anyone does a piano solo in a rock band. I'm never thinking, 'I need to figure out a sweet run on the piano here.' It has its place, particularly in rock bands where it's a jangly percussive thing in the background."

On the verge of releasing their sophomore album, J Roddy Walston & The Business will perform at the Visulite Theatre on May 7. It's a chance to showcase some of the new material before it's available, beat the crap out of another piano and reconnect with an "old friend."

The band last performed at the Visulite in September of 2011. A small crowd absorbed every ounce of energy Walston and the band exuded and gave it right back to them. The give and take knocked the dust off the curtains and created a buzz that's sure to fuel a larger turnout this time around. The only thing left in the performance's wake was a piano stool. It's been in a Visulite storage room ever since, a piece of masking tape marking it with the band's name.

Walston doesn't remember leaving it behind, but says if he did, there was probably a reason. "I blow through those things a lot," Walston says. "Drummers don't really jump up and down and kick them over. I break one every four or five months — it'll snap in the middle of a show. I hope no one tried to sit on that one. I might have left it on purpose because there was some kind of near-danger."

Though Walston is most often seen playing piano, he also finds time to play some guitar, drums and bass at any given performance. Again — whatever serves the song. And the songs have become more important on the upcoming release, Walston says. Where the band's 2010 self-titled debut was driven by pure manic energy and style, the Baltimore rock quartet focused on the songwriting for its upcoming ATO Records debut.

"The last record was a lot more — the songs were carried through on energy and wildness," Walston says. "The songs on the new record are still energetic, but are a lot more centered around the song — strong melodies, catchy and the lyrics are better, weirder, darker. The last record was very loose."

They'll be playing some new material while touring, but Walston knows fans want to hear their favorites, as well.

"I always look at it from a fan's point of view when we play live," he says. "On one hand, the band has to keep itself from going insane. On the other hand, when a band has a new album coming out, you don't only want to hear three songs you know and the rest is new stuff. Sure, it's cool to hear, but you don't get to scream along and jump around. The reaction to new stuff is never as strong as when you hit the first note of something they know."

Having spent four or five years consistently on the road, Walston and the band have enjoyed a break for the last seven or eight months while recording, but are ready to get back out there. The upcoming tour is more of a warm-up before the album is released this summer and the touring schedule gets a bit more vigorous. In the meantime, Walston hopes people hear the music and are interested.

"We play the kind of music that we love," Walston says. "The main rule in our band is remembering what we love, what we want to hear or what do we wish people were doing that we would want to see or hear. Are we entertaining ourselves? Hopefully, other people feel the same way. If you only try to please people, you end up chasing your tail. We write records for ourselves and if other people like them too, awesome."