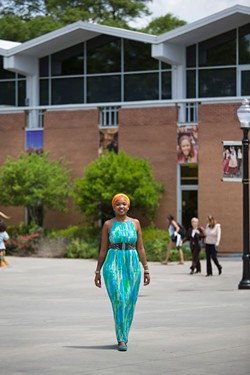 Elver Barrios wanted to go to college in Chapel Hill. The Guatemalan-born student had the ambition and grades to get accepted. What he didn't have was the money. As an undocumented student, he would have to pay out-of-state tuition, despite his family having lived and worked in Charlotte for almost a decade, and was ineligible for most scholarships, despite his high scores, because he didn't have a Social Security number.

Mpumi Nobiva was raised by her grandmother, a domestic worker in Johannesburg. She graduated with honors from the Oprah Winfrey Leadership Academy for Girls, the first in her family to graduate from high school, and had her choice of South African schools, but wanted to continue her education abroad.

Both of these students found their path to higher education in Charlotte, at the historically black Johnson C. Smith University. Since 2010, the small private university has doubled its enrollment of international students, representing close to 30 nations, including South Africa, Liberia, Nigeria, the Virgin islands, Rwanda, Ethiopia and undocumented students originally from Latin America.

"We have what we call transnational conversations between our Caribbean, Latin and African students, sharing and dispelling myths [about America]," Campbell says. "Some are surprised that this is America in Charlotte; they are used to only seeing Hollywood or New York [portrayed]. So we have moments of truth."

Back in 2010, JCSU had 28 international students out of a student population of 1,334, representing Jamaica, Bermuda and the Bahamas. Spurred on by Smith's newly inaugurated president Ronald Carter, the school began ramping up efforts to increase the religious, racial and ethnic diversity on campus. The catalyst was the "transformative vision-in-mission introduced by Dr. Carter," says Catherine Hurd, dean of enrollment services.

"We absolutely increased [international recruitment], so our students would have exposure to a more global campus and to give students a more international experience," Hurd says. Smith began hosting International Day, where students make traditional food, perform cultural dances and wear traditional clothing, and celebrating Hispanic Heritage Month each September. The school also generated an eight-point plan to support campus diversification and improve recruitment of international students, and briefly hired a counselor for diversity and international students in the admissions office. (They are currently reviewing applications for a new diversity admissions counselor.)

Roughly a year later, Smith received a $35 million grant from Duke Endowment, one of the largest gifts ever given to an HBCU (historically black college or university). The Duke Endowment supports programming and scholarships at Smith, Davidson College and Duke and Furman universities. The grant included $4.5 million in scholarships for international students. Nobiva, the South African student, received one of those scholarships.

So which came first, the desire for diversity or the funding? "The goals were already in place," says Hurd, "but the grant is helping grow our international population." She says the school has increased recruitment in border states such as Texas, California, Florida and Arizona, as well as the Caribbean and parts of Africa. By spring of 2013, 61 international students from Jamaica, South Africa, Trinidad and Tobago and Haiti were enrolled with F-1 educational visas, making the undergraduate population of 1,490 nearly 4.1 percent international. A Smith spokesperson said the university is at 10 percent overall diversity — that counts religion, race, ethnicity and nationality ­— and has set a goal of 15.8 percent overall diversity for Fall 2013. By comparison, international students make up only 2 percent of UNC-Charlotte's undergraduate body.

Nobiva says she had no problems adjusting to the States or her new school. "Smith attracted me because of its legacy, being an HBCU and being in the South. I also liked its religious ties," she says. Nobiva is active on campus and in student organizations, and has forged strong ties off campus as well. But for some, adjusting to American culture can be a struggle.

International students may have already passed the standardized English language tests, but the rapid pace of conversational English can be challenging, especially outside of the classroom. Americans tend to speak fast. Along with trying to keep up with conversations, students studying abroad in America — all students, not just the ones at JCSU — are obligated to enroll full-time every semester, which is 12 hours for undergraduate studies. If they fall behind in classes, their student immigration papers could be negated. They can't just drop out of school and work for a semester if they're having difficulties. And then there's the paperwork.

"We spend a lot of time on immigration to help students maintain their status," says Marian Beane, director of International Undergrad Admissions at UNC-Charlotte. "We must report every 21 days to the government to show students are maintaining their schedule and their averages. If they have internships or training, there is paperwork related to that."

The situation for undocumented students is a bit different. Considered neither international students nor true traditional students, they face all of the penalties and none of the benefits of citizens. To complicate things, they are often saddled with the cultural handicap of being the first in their families to go to college, and consequently don't have support at home to help them navigate the system. For these students, Smith took a bold step in making degrees accessible: offering in-state tuition to undocumented students.

"We started before the Dream Act," Hurd says. "This is our third recruitment cycle [targeting] Latinos." To bring in these students, Smith uses a closer-to-home approach, reaching out to the Latin American Coalition and other local civic and religious organizations that work within this population. It's working.

"Due to lack of information, I didn't know private schools had more freedom than state schools," Barrios says. "I thought because I was undocumented, I couldn't go to school." Set back but not deterred, he founded College Access Para Todos (College for All) with like-minded undocumented youth to investigate higher-ed options. He learned of Smith's offer and took it, sharing the word with his group that admission was possible "if you have the grades and spent the time living here like any other qualified student. JCSU opened the doors."

"They don't have 10 colleges to choose from, or go because mama says so. When they get here, it is business," says Campbell, who is from Jamaica.

Beane agrees. "They're not typically going to say, 'I can't handle that.' ... They've come a long way, done a lot, paid a lot of money in tuition. They are going to figure out how to make it."