Jiro Dreams of Sushi: A tasty treat | Reviews | Creative Loafing Charlotte
Switch to the mobile version of this page.


Sukiyabashi Jiro, one of only 106 restaurants worldwide to earn the Michelin Guide's coveted three-star rating (in 2008, it was one of only 69), is located in an unassuming space in Tokyo. It seats only 10 customers, and reservations must be made far in advance. And the minimum cost per person to dine there? Try 30,000 yen — which, depending on the market, can be anywhere from $275 to $375. Wrap your mind around that as you clip out that "buy one entree, get one free" coupon for City Tavern. 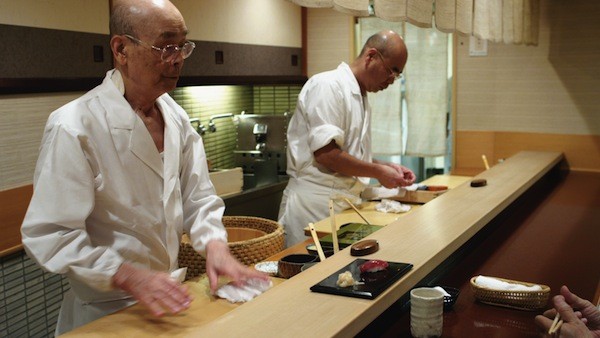 Since few (if any) of us will ever be able to actually taste sushi chef Jiro Ono's cuisine, we'll have to console ourselves with the visual bliss of Jiro Dreams of Sushi, an entertaining documentary about a man whose entire life is dedicated to his craft. Still active at the age of 85, Jiro, assisted by a small staff that's fronted by his 50-year-old son Yoshikazu, takes great pains to create and serve sushi that's in a class by itself. Director David Gelb's film takes us through the process, including the frequent trips to the fish market, the preparation of the food (an octopus, for example, needs to be massaged for at least a half-hour before it can be considered tender enough for consumption), and the serving of the delectable treats to clearly appreciative customers.

Gelb only makes a misstep toward the end, when he follows Jiro and Yoshikazu as they head out of town to visit relatives they haven't seen in ages. This unexpected peek into the personal life of a workaholic invariably raises important questions that aren't answered, even though they're more central to Jiro's life than this voyage. For instance, where is his wife? Presumably, she passed away, but when? And since we learn that Jiro left home at the age of 9, how did he survive during all those years before adulthood?