Album is a necessity for the thoughtful music listener

It was the year Tony Orlando and Dawn inflicted permanent emotional damage on us with "Tie A Yellow Ribbon." And Cher audibly pistol-whipped us with the aural insult, "Half Breed." Loggins and Messina skipped and danced onstage like demented Campfire Girls. Focus yodeled, Karen Carpenter whimpered, Elton John made us actively despise the early '60s when he sang that stupid fucking "tribute" to Del Shannon, "Crocodile Rock" (which was so upsetting and nauseating it probably gave Del colitis).

Still, in the midst of this mass idiocy, there was an album so lovely, so indelibly melodic, odd, wonderfully anomalous. Meaning it sold 14 copies. But it is played and cherished today in ways those other records will never be. It is John Cale's Paris 1919. It turns 40 this month. 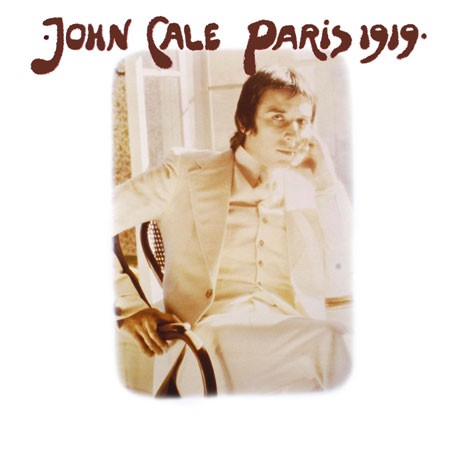 You've never heard anything quite like Paris. That is, if you've heard it at all. What's so immediately striking, if you are aware of Cale's earlier group — that forgotten bunch, The Velvet Underground — is how remarkably different this music is.

It's a little hard to believe that the man who used to saw on his viola like a mentally-ill magician trying to cut a lady in half, created here, such remarkably tuneful pop — as catchy as the Beach Boys, as delicate as a Matisse drawing. Unlike his work with the Velvets, Cale and the musicians on this solo album (many of them borrowed, improbably, from the funky, gritty Little Feat) are not only tuneful, but in tune, as well.

Whether a song is led by an acoustic 12-string, an organ or a slide guitar, the record does have the earmarks of those prissy '70s: The playing is polished, the sound full, rich and flat-out pretty. But Cale, that dark-souled Welshman, hasn't forgotten to stitch his black-crepe lyrics to the underside of these nine unforgettable songs (there are also outtakes and such on the re-release).

Yep, on Cale's record, you can't miss the tension between the dark and the light. Paris is chiaroscuro city. Virtually every song, melodically, is as winsome as something by Brian Wilson (a hero of Cale's). But the lyrics are something else.

Often employing surrealism, the record depicts a world gone seriously wrong. From the image in "Hanky Panky Nohow," wherein the nervous narrator talks about "elephants that sing" and "cows that agriculture won't allow," to the title track, in which a man keeps seeing his ex, as a ghost, emerging from "a clock across the hall," everything in Cale's universe is screwed up, upside down, missing or falling apart.

Perhaps most unsettling of all is the one simple line in the beauteous ballad, "Andalucia," in which hardboiled, scowling Cale, a man not known for his sentimentality, croons in falsetto, "I love you." No, it's not shocking hearing the glowering man from Wales utter the oldest line in music — any more than it would be hearing the same words from Freddy Krueger or Frankenstein.

Meanwhile, Europe, during one of its most deceptively darkest moments, has hardly been forgotten on this record. Despite "love songs" like "Hanky Panky" and "Andalucia," there's an overarching feeling here of quiet, terrible dread. It's wise to remember that the title refers to a peace conference wherein the future options for more than 32 countries, which had recently seen the end of World War I, was discussed. But as fine as that may have seemed in the early 20th century, the rain-swollen clouds of fascism were gathering overhead, too. And Hitler's Germany (alluded to in the song "Half Past France") was already beginning, amidst these plans for peace, to build its evil infrastructure.

Cale, classically trained in America on a Leonard Bernstein scholarship, doesn't fail to bring classical shadings to Paris 1919. And the elegant chord changes, use of strings and pedal steel, its indelible melodies, are probably most responsible for the album's continuing, surging popularity among discerning music fans. Perhaps what's most striking about the tunes and chords which support them, is that they verge on the conventional.

For a guy who loved dissonance, who played mental patient-mad viola on The Velvets' "Black Angel's Death Song," Cale morphed into an actual '70s singer-songwriter on Paris. As he would do only fitfully again, Mr. C. writes actual, gorgeous songs. Songs with descending melody lines, songs that feature acoustic guitars, songs that sport strings. Love songs! No one will ever mistake him for Jackson Browne, say, but considering the elegance of these tunes, how accessible they are, and yes, how sharply-dressed and handsome Cale looks on the cover, it's a little surprising that Paris 1919 didn't sell big when it was first released.

And yet, its place in history now seems assured. Whether it's Uncut Magazine trumpeting the CD re-release (while yawning over its rather bland extras), Yo La Tengo covering "Hanky Panky Nohow," or the composer himself, performing the album in its entirety at the Brooklyn Academy of Music this past January, Cale's shimmering, spectral masterpiece glows brightly in more and more hearts every year. It's only right.

Agriculture may have problems with Cale's weird cows. And his mix of pretty melodies and weird words. But Paris 1919 is more than just allowed in the world of music. It is, for many thoughtful listeners, adored. Not to mention, an absolute necessity.