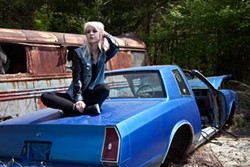 Julia Bullock runs her fingers through her long blonde hair and looks around the room. "I was sitting in this coffee shop when a friend told me, 'Don't put a timeline on anything," she says. "I don't have a time for anything other than my EP coming out in July. I just have to take one step at a time."

Though she's only 20 years old, it's been a long seven years for Bullock, who started performing at age 13. Her first real band, Lyra Shines, started when she was 14, changed its name to the Local Traumatic when she was 16, then broke up when she was 18 — around the time she appeared on the television competition show, The X Factor.

That was a year and a half ago. Now the singer, who is ready to be known as Julia Lauren, is preparing for the next phase of her career. Though some Charlotte-area performers have found success in the Queen City — Avett Brothers, Antiseen, Matrimony and Benji Hughes among them — there are other musicians who have moved away to find greener pastures. So, having tasted a bit of the spotlight and feeling like her chances in Charlotte have run their course, Lauren's packing her bags and moving to Brooklyn at the end of the month, much as musicians including Jeremy Current and Jordan Klemons have done.

"I don't have an apartment or job there," she says. "I plan on going and building a band. I've been in talks with some great musicians who want to play [my newly recorded] EP live, but that's not going to pay the bills."

She did see an ad on Craigslist paying $500 for women to have their feet massaged and videotaped, but her mother quickly shut down that idea. Whatever she finds, it just has to pay the bills long enough for her to make it via her music. One look at how her face lights up when she talks about music lets you know quickly that Julia Lauren won't stop until she makes it.

When she appeared on The X Factor in 2012, the judges could have quickly shot down any dreams. Instead, she was overcome with inspiring feedback. Simon Cowell told her, "I think you are really, really, really good. I like your image, I love your taste, you look very current. One of my favorites."

Britney Spears told her, "you definitely have a unique sound when you sing ... You're a star." And record executive L.A. Reid said, "You have that rock star thing. You have the attitude."

Lauren went on to make it through the boot camp section of the show, basically putting her in the top 14 competitors in her category, before she was eliminated from the competition.

"My intention, at first, was to get the band more exposure," she says. "When the band broke up, I decided to try and get as far as I could — I didn't have winning in mind. I wasn't on it long enough to show people any embarrassing or bad things. I had a six-minute segment on there, too, which was more than a lot of people. In a way, I was lucky that I didn't get further."

Lauren left the show and tried to reunite the Local Traumatic, but it didn't work out. Two of the band members — guitarist Christian Spence and drummer Josh Thomas — are now in Replicas. Lauren joined The New Wilde with Local Traumatic bassist Matt McConomy, but after two gigs, Lauren knows Charlotte isn't the place for her any more.

"I didn't like Los Angeles because I hate to drive," she says. "Nashville is cool, but there's so much country stuff everywhere. New York — you can walk everywhere or take the subway. I was there for three days and fell in love with it."

Lauren, who sings with a Gwen Stefani-esque vibrato, has always known she wanted to front a band since seeing Green Day when she was in the fifth grade. She tried out for American Idol when she was 13 and the Glee Project when she was 18.

A graduate of Marvin Ridge High School in Waxhaw, Lauren got a scholarship to Queens University, but, with her parents' support, knew her heart was more interested in pursuing music.

When she's not working as a kickboxing trainer in the mornings or nanny in the afternoons, she's searching for New York-area jobs and apartments, but mostly working on her music and career.

Performing solo on The X Factor taught her a lot about being on the stage and helped her make connections in the industry. Though mentioning her success on the show gets her foot in the door with different music-related companies, she's ready to put the show behind her and find a new identity on the music landscape.

"My EP is more pop-oriented than [what I did with] The Local Traumatic," she says. "It's got indie elements in it and a band will make it more alt-pop/indie rock, which is what I'm shooting for. It's the most comfortable I've ever been when I'm singing. I feel like I've definitely found the right songs for my voice, but I need to add a little more edge to it."

With the still-untitled EP finishing up, Lauren is focused on Brooklyn, getting a band together there and starting to showcase her music.

"I have to remind myself that I have half the work done already," she says. "I'm building my brand and who I am. I'm going to be in the land of musicians. I'll be on track and can't let anything deter me. [Singing] is what I've always done. I don't see myself doing anything else."