Kill And Kill Again | Features | Creative Loafing Charlotte
Switch to the mobile version of this page.

The hits (and misses) keep coming in two follow-ups 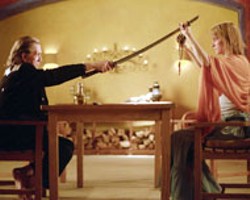 The inability to notice that the emperor had no clothes -- not even a bandanna -- helped turn Quentin Tarantino's Kill Bill Vol. 1 into a critical darling and a favorite of fan-boys everywhere. Seeing masterful artistry in that picture where I saw only monotonous bloodletting, these enthusiasts have been eagerly counting the minutes until the release of Kill Bill Vol. 2, ready to once again wallow in two hours of graphic murder and mayhem.

People, prepare to be disappointed.

Although originally conceived as one movie until the length dictated the creation of two separate flicks, the Kill Bill volumes couldn't possibly be further apart -- in style, tone or content. Whereas Volume 1 was action-packed from the get-go, Volume 2 includes only a couple of battle sequences. Whereas Volume 1 was stingy on dialogue and characterization, Volume 2 is practically a nonstop gabfest, with words -- not actions -- conveying the essence of each character. Volume 1 was Tarantino's tribute to those martial arts yarns he adores, but Volume 2 pays tribute to another beloved genre, the spaghetti Western. And while Volume 1 clearly deserved an NC-17 -- a rating that Jack Valenti and his MPAA goons were too gutless to slap on -- Volume 2 is clearly within the boundaries of its R rating, with the gore largely kept on the backburner. Volume 1 diehards will inevitably feel let down, but Volume 2 is nevertheless the superior movie.

That's hardly intended as a rave, since it's still obvious that a combined four hours of viewing time is too much to spend on such a trifling effort. Had Tarantino taken the kinetic energy displayed throughout Volume 1 and applied it to the more meaty script showcased in Volume 2, he might have really had something; instead, there are several passages in this second chapter so bereft of personality that Tarantino's status as a leading auteur -- a man whose shooting style is instantly recognizable -- might be in danger of slipping a few notches.

As before, the chief asset is Uma Thurman. Having gotten her bloody revenge on two of the five assassins who slaughtered her friends and left her for dead, her character (known as The Bride) now sets her sights on the rest of the hit squad: the femme fatale Elle Driver (Daryl Hannah), the slovenly Budd (Michael Madsen) and, of course, the leader of the pack, her former lover Bill (David Carradine in a memorable turn). It's Thurman's conviction that ultimately drives this story, and Volume 2 allows the actress to really take the emotional reins of what eventually turns into an off-kilter exploration of -- of all things -- motherhood. It's Tarantino's attempt at a grace note, ending with hearts being filled with love rather than carved out and splattered all over the upholstery.

Never mind the yards: Here are 10 whole reasons why The Whole Ten Yards is easily the worst movie to (dis)grace movie screens so far in 2004.

1) Was this sequel even necessary? Does anybody recall any details regarding its so-so predecessor, The Whole Nine Yards? That film had something to do with Matthew Perry's nerdy dentist getting involved with Bruce Willis' gruff hit man, but moviegoer chitchat tended to center (depending on the company being kept) either around Amanda Peet's perky performance or Amanda Peet's perky breasts. The rest of the film has been forgotten by time. (For the record, Peet's back, but her bare breasts have declined to make an appearance.)

2) The director of this fiasco is Howard Deutch. Howie previously demonstrated his instinct for comedy by helming The Great Outdoors, the Ted Danson bomb Getting Even With Dad and that Keanu Reeves football flick The Replacements. Nuff said.

3) The script for this picture somehow manages to be both easy to predict and impossible to follow. That is, the basic story thrust and the "surprise" twists are simple enough for a toddler to grasp, but the actions of the characters make no sense from scene to scene, with people behaving in ways that don't even work within the context of the story.

4) When we first see Bruce Willis, he's wearing an apron and a pair of bunny slippers. This isn't nearly as hilarious a sight gag as the producers intended -- in fact, it's kinda depressing to be reminded that there has never been a script that Willis feels is beneath him.

5) Matthew Perry proves yet again that life after Friends is probably a pipe dream. It's hard to recall another actor who labors so hard for laughs and generates so few of them. Perry taking a pratfall or running into a door might draw a chuckle the first 250 times we see it happen in this film, but it becomes tiresome after that.

6) Bruce Willis has a Drunk Scene. As we all know, the patented Drunk Scene is a prime opportunity for shameless mugging and aimless overacting. Willis' attempts at pretending to be smashed travel far beyond embarrassing, and a mercy killing (either him or us; it doesn't matter at this point) seems like the only logical recourse.

7) Following the Drunk Scene, we see Willis and Perry waking up the next morning, naked in the same bed. At which point Perry mutters, "Why does my ass hurt?" No further explanation needed for its inclusion on this list.

8) I didn't even remember Kevin Pollak being in the first film, but apparently he was, playing a foreign mobster prone to mangling the English language. Here, he delivers a hammy performance as his previous character's dad, who says "Yimmy" for "Jimmy" and calls a piece of pie a "piece of pee" (har har).

9) This movie is so desperate for laughs that it trots out that old stand-by: an elderly woman with flatulence problems. This character exists for no reason other than to break wind every time she enters a room. And the filmmakers thought this gag was soooo funny, the movie actually ends with her tooting one last time.

10) The Whole Ten Yards is so unspeakably awful that I swear I felt precious brain cells melting away as my eyes took in the horror. The experience left me shell-shocked to the point that I was wandering the parking lot afterward in a daze, dependent on the kindness of a fellow scribe to remind me who I was, what I was doing there, and where I was parked. I'm no expert on the subject, but shouldn't Workers' Comp be covering my recuperation?