It's swampy backstage at the Visulite Theatre. In the cramped quarters, former home to the venue's long-departed rear-screen projection system, girls in various states of habille and dishabille prepare for the night's show. The last-minute wardrobe checks and good-natured, hardboiled banter are the stuff of myriad black-and-white stage-door movies that descend a winding staircase past the heyday of the Ziegfeld Follies and the Folies Bergère to theater's earliest performances. 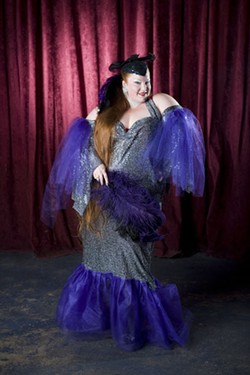 Leaning on the counter of the makeup mirror, the evening's bouncer -- a Valkyrie in a skin-tight black sheath with a cutout spider-web yoke -- contemplates headgear options, eventually ditching an exotic turban in favor of a "don't-fuck-with-me" beret. Garbed in a white lace, floor-length gown, Atlanta-based ecdysiast Talloolah Love, looking for all the world like a zaftig reincarnation of Amy Semple McPherson preparing to lead the faithful to glory, adjusts her corset stays. Freshly arrived from the airport, a modern-day flapper endowed with the insouciant stage soubriquet Tits McGee -- and only a modestly sized bosom -- discreetly changes her frock in the ladies' room. Oh, the irony.

"Tits!" hollers a voice that could rattle the back row at Radio City. "Quit hogging the air conditioning!" (Apparently, the only functioning AC is located in the loo.)

The source of the clarion call is Big Mamma D, aka Deana Cochran, the one-woman "juggernaut" whose determined vision and Herculean efforts have almost single-handedly been responsible for bringing the burlesque arts back to Charlotte.

The L-shaped dressing room is divided into two sections. The smaller portion, two steps up, frames its occupants like red-light divas in an Amsterdam window. Stretched across the divan, Big Mamma D, larger than life and garbed in a slinky silver number, is holding court. At her feet, Nashville's Miss Lolly Pop -- a petite Sandra Dee/Betty Hutton blonde channeling Candy Barr -- sits on the floor, barefoot, applying the finishing touches to her stage makeup.

With less than three hours until the curtain goes up, Big Mamma has a lot on her mind; so much in fact, that she's forgotten her music and has had to send someone home to fetch it. It's a minor snafu, which the chanteuse takes in stride, but there's a lot riding on tonight's performance. In addition to attending to all the last-minute details of the show for which she functions as producer, director, press agent, seamstress and wardrobe mistress, Big Mamma has planned a very special finale in which she will wed long-time beau and fellow cast member, emcee Johnny Anonymous (David Pendragon) in a real-life, onstage ceremony. "I got so fed up with, 'We'll do it later.' And it was me putting it off. It finally hit me that I'd never have time to plan a wedding when I was planning a show, so it only made sense to do it as part of the show," she says.

Big Mamma is showing off the beautiful black-and-white wedding ensemble with corseted top and matching veil she's created, when duty calls. In the front of the house, there is a cry for duct tape to cordon off the area where Sideshow Bennie will be eating fire. (Big Mamma loves to see her audience sizzle -- but not literally.) Onstage, the juggling Fettuccini Brothers rehearse a hat-swapping act that would give Harpo Marx a run for his money. After some wrangling, duct tape is located and dispensed. The situation handled, Big Mamma disappears to put out whatever other fires remain before the show begins.

While Big Mamma D is an acolyte of classic burlesque, her shows embrace an amalgam of burlesque, vaudeville and musical theater, with a little touch of carny on the side, and she sees no conflict in mixing media. "The definition of burlesque is just a mockery or a sham," she explains. "When you go back to the [1700s] and 1800s, people were burlesquing the major plays of the times. Whatever was onstage, they would make fun of and parody. Around the turn of the 20th century, when vaudeville shows got popular in live theaters, they would bring in a headliner girl and maybe one or two others who had worked their way up from the chorus." The great divide came when some promoters realized that it was the scantily clad girls who were bringing in the money. While vaudeville had its share of "va-va-va-voom," eventually, burlesque evolved into a showcase for strippers, and many theaters became strictly burlesque houses.

As the demand for talking pictures increased, vaudeville took a nosedive. One casualty was the 1,450-seat Carolina Theatre on Tryon Street, the original home of vaudeville in Charlotte. Opened in 1927, the theater has been dark since 1978. Says Charlie Clayton, president and founder of the Carolina Theatre Preservation Society, "The theater has a 40-foot proscenium stage that's 29 feet deep. It originally had dressing rooms right and left and a 40-foot fly space. It was the only theater in town that had live stage performances from 1927 to 1955 [it was replaced by Ovens Auditorium in '55]." The last vaudeville act played the Carolina in the mid-'30s. "The theater got a big makeover in 1938 to accommodate sound movies. That was the end of vaudeville," says Clayton, who, with the city and investors and developers, is in the process of restoring the Carolina to its former glory.