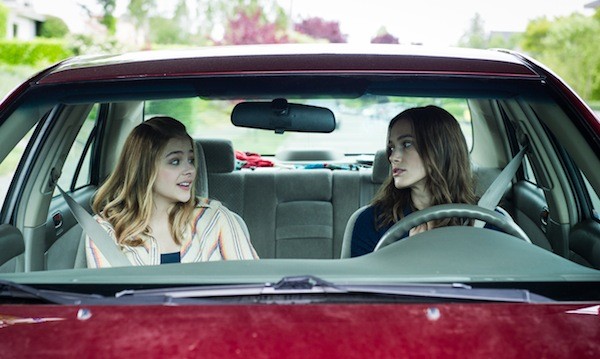 The new seriocomedy Laggies marks the first produced screenplay from Andrea Seigel but the sixth directorial feature from Lynn Shelton, and one can't help but wish the veteran had helped the newbie with her screenplay in exchange for a co-scripting credit. After all, Shelton has a handful of writer-director assignments to her name (including Your Sister's Sister and Humpday), and her prowess with the pen doubtless could have made Laggies' plot a little less contrived and a lot more believable.

Then again, the unlikelihood of the scenario in no way diminishes what's taking place within its parameters, as Laggies proves to be refreshingly honest in the manner in which it examines the life of a 20something slacker. That would be Megan (Keira Knightley), whose life is divided between skating by with menial jobs and spending quality time with her boyfriend Anthony (Mark Webber), a nice if bland guy who's been her steady since high school. Anthony is ready to take their relationship to the next level, but Megan, who's suddenly dealing with several crises at once, needs time to clear her head. Fortunately, she's just become friends with high school student Annika (Chloë Grace Moretz), and the teen is only too happy to let her crash at her house for a week. Annika's dad, a chipper lawyer named Craig (Sam Rockwell), gets wind of the uninvited guest, but rather than kicking her out, he decides that it's OK for her to stick around.

Like I said, contrived. Yet the frequently daft developments melt in the wake of the powerful impressions made by both the characters and the actors bringing them to life. Seigel and Shelton dare to make Megan an exasperating woman whose actions often cause pain and discomfort to others — it's the sort of person rarely encountered as the protagonist of a feature film even though it's the type we encounter on a daily basis (or may even be ourselves) in the real world. Kudos to the pair for not pulling punches, and cheers to Knightley for expertly walking the fine line between ingratiating and infuriating. Moretz scores as a teen who often feels adrift without a mother to guide and support her — the scene in which she and Megan visit the deadbeat mom, a lingerie model (Gretchen Mol) who has no use for a family, manages to be at once comical and tragic — and if Rockwell's good-guy dad isn't quite as developed as the female players, the actor invests him with enough personality to glide over the rough spots. The film follows suit, doing enough right to make it easy to brush aside any niggling details.