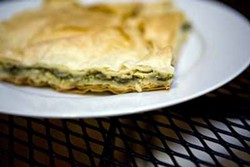 Long-time Charlotte residents joke, half-heartedly, that Center City is devoid of architectural examples from various periods, since many of those buildings which once stood so grandly along the streets have been imploded. Those granite pillars greeting visitors to Rock Hill, S.C.? They use to reside on South Tryon, in front of the even grander Masonic Temple.

Even though many landmarks are gone, one of Charlotte's most charming buildings is celebrating its 95th year. Latta Arcade was designed by William H. Peeps in the Beaux-Arts style and is on the National Historical Registry. While the exterior has undergone remodeling, the interior is surprisingly intact. Latta does not have the breathtaking impressiveness of, say, the Galeries St. Hubert in Brussels. But it has, in miniature, a bit of that old-world feel with parallel rows of shops and offices held within the expansive skylight roof. The roof, ironically, was not built to shield shoppers from the elements as were the shopping arcades of Europe. This roof provided natural light to grade cotton.

During the past decade, Latta Arcade and its backdoor neighbor, Brevard Court, have become an organically grown food court with a variety of food stands, sandwich shops, restaurants and bars. Among these eateries is a diverse collection of independently owned food operations: Flavors of India, Fujiyama, Pie in the Sky Pizza, and Chick's. Salsarita's, a Charlotte-based franchise concept, fronts Latta on South Tryon.

Demetra Georgoulias, who owns Chick's with her husband Steve, notes that while they "love being in such a beautiful spot," the economy during the last year has affected their business. She says that many of their customers are working from home or taking out leftovers. "It's been a challenge," she adds. One Latta shop, Woody's Chicago Dogs, a franchise, recently closed.

Brevard Court, with its iron gate and bricked area flowing between contiguous red-bricked store fronts built during the 1920s, oozes character. The French Quarter, which anchors these shops with an entrance on Church Street, opened in 1978. For the past 23 years, this restaurant/bar has been owned by the Photopoulos family. The French Quarter is known for its Salt 'n Pepper Wings, inexpensive bar drinks and neighborhood atmosphere. General Manager Angelo Tsepelis remarks, "We know our customers by name. We even have our own Norm -- really, his name is Norm."

Another long-time resident of Brevard Court is 22-year-old China King, owned by June Tong, and just inside the courtyard is Danny Kefalas' place, Brevard Court Sundries, which opened in 2002. Kefalas says owning a restaurant on the courtyard came naturally since his parents had a tailor shop there for 35 years. "I grew up here," he says.

Recently, Courtyard Hooligans, a soccer bar, opened. Eggheads, a spot for breakfast, brunch and lunch, is slated to open soon.

The newest food entry on Brevard Court is Metropolitan Café & Catering, which offers Turkish cuisine. This is the first venture for brothers and owners Tufan and Tayfun Ulak, natives of Istanbul.

"We saw this space and it was so beautiful and historic. It reminded us of Istanbul," says Tufan Ulak. When the brothers learned that Charlotte -- for that matter, Mecklenburg County -- did not have a place serving döners, they knew they had a good plan.

Integral to Turkish cuisine are rice, wheat, lemons, olive oil, cheese, fish and kebabs. All except the fish are found here. However, as most cuisines are reduced to a single dish (for us, the hamburger), for Turkey that dish is the döner, vertically stacked meat grilled over a slow fire, similar to Greek gyros and Lebanese shawarmas.

Döners have become a popular street food in some parts of Europe, notably Germany. In the U.S., the meat for döners is typically a ground beef and lamb combination. In Turkey, as with gyros in Greece and shawarmas in Lebanon, the meat is not ground but stacked together on a skewer. Metropolitan uses the ground mixture for its döners, which are served as a wrapped sandwich or as an entrée.

The menu at Metropolitan Café is focused on chicken, döner, and beef kebabs served with a variety of sides. Ordering is done at the counter and the sides can be viewed in a glass case. These sides, which change daily, are their strength. Kisir is a brilliant mix of bulgur, parley, scallions and red pepper paste (biber salças) highlighted with lemon. Also offered are a duet of flavorsome bean salads: Piyaz (white kidney beans) and Barbunya (Roman). The stuffed grape leaves are made in-house with large tender leaves encasing a savory interior of rice, pine nuts and spices. Dessert one day was a delightful mix of honey-sweetened pumpkin sprinkled with chopped walnuts. Ulak says their produce is bought from local farmers markets -- except the grape leaves.

Metropolitan has two dining areas on either side of the staircase upstairs; both rooms have expansive windows and skylights. Yet eating on the courtyard is better. A taste of Istanbul in the midst of Charlotte? Consider it time well spent.