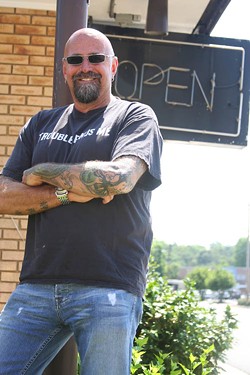 Ever dreamed of a restaurant where your favorite dish was on the menu -- because you said so?

If you've been to Charleston, S.C., and dined at Oak Steak House, then you're probably Facebook friends with McKee, the eatery's owner, who has more than 20,000 followers on the social networking site. His online friends and customers helped to inspire the restaurant's "roadside kitchen" concept.

"The definition of a roadside kitchen is a very comfortable environment, a very homey atmosphere. Charlotte is going to be a little bit different than Charleston. It's going to have an urban feel to it," said Steve Palmer, McKee's partner in the venture. The tables will be made of reclaimed wood, the front of the restaurant will have garage doors and 15 North will grow many of its own vegetables.

"That all goes with the farm-to-table concept," McKee said. "We get the communities involved, we go to our fan base and ask people to go back a generation or two. We ask them to ask their grandparents what roads they used to travel down, and we get all sorts of local foods, take that idea and give it our interpretation. The community feels like they are a part of the creation of the restaurant."

McKee is certain that consumers will flock to 15 North, which will be located at 1513 Montford Drive, because a similar restaurant he owns -- 17 North -- is already thriving in Mount Pleasant, S.C. Besides, there isn't much that McKee touches that doesn't become a success. The tattooed chef set roots in Charleston more than 20 years ago -- just a few months before Hurricane Hugo ripped into the city -- when the cuisine was, as he described, "fried and broiled seafood platters. It was no culinary destination. It's so funny how this Brooklyn renegade was so embraced by this seersucker town." Now, Charleston is one of the top three foodie destinations in the country.

As he plans the menu for 15 North, McKee will reach out to his Charlotte Facebook friends for meal suggestions. And we're not talking dishes you can find at any chain restaurant; he's searching for meals that your mama and grandma used to make -- no matter where you were born and raised.

"We've gotten a few people that have gone down that Southern route, so now I have to refocus them. Charlotte has developed into a banking town; so there will be some locals that grew up here and there will be a little Southern influence. But I know that it's turned into more of a melting pot of people, so I do want to get people's input," McKee said.

That means he wants to see meals from all over, like the diversity of Charlotte's population.

The new restaurant's planned prices are reasonable, ranging from $13 to $20 -- and in this case, McKee promises, low prices won't mean low quality.

"A lot of times when you get restaurants that go for the $13-$20 concept, they use the shittiest ingredients," he said. "They're not driven by a chef; they get cooks, not chefs."

But at 15 North, Steve Jordan, a chef with nearly two decades of experience and a close friend of McKee's, will be running the kitchen. McKee and Jordan actually reconnected on Facebook after losing contact for six years. They both share the same passion for good food. So when McKee wanted someone to be in charge of his kitchen, he knew it had to be Jordan.

"This motherfucker is one of the most talented chefs in the industry," McKee said of Jordan. And it helps that Jordan isn't a stranger to Charlotte. He's worked in the area, including Lake Norman. "He's been up here for a long time and he's going to bring a following."

Everyone who walks into 15 North will be treated like a "big shot," McKee said. "When you come into this place, I make sure that the business is as successful in my absence as it is in my presence. We share information we're going to find out the first time you come in: where you sat, what you drank, what you ate. We're going to know your spouse's name, your mother's name, your dog's name, your car, your license plate," he said. "We're going to treat you better than everybody else. Everybody wants to be treated like a big shot, and it's by collecting information and paying attention to detail [that we can do that]."

McKee predicts that everyone in Charlotte will end up talking about 15 North -- and that means the bellhops in hotels, cab drivers and other everyday folk. "I'm just a street urchin from Brooklyn that was never given anything, and I go after people like me. People who don't feel entitled, I make them my friends," McKee said. "This is the way we come into a community; we don't come in [like] we're a bunch of assholes who don't want to get involved in the community."

For more details about McKee's new restaurant, search for the 15 North fan page on Facebook.