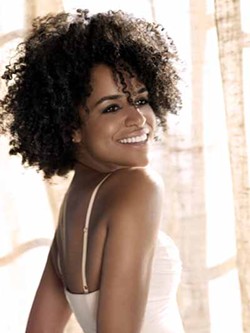 Just when you thought that contemporary urban music was a lost cause — that with all the songs about the newest dance crazes and the endless number of tunes featuring computerized vocals the genre was damned-near hopeless — along comes an artist like Laura Izibor.

Izibor, a singer/musician who's currently on tour with India.Arie, is the woman behind the chart-hopping single "From My Heart to Yours" -- one of the most soulful songs to hit commercial radio in years. The fact that the melodic, keyboard-driven track made it to radio (which is currently obsessed with hip-hop's lowest common denominators) at all is a miracle. Of course, there are dozens of artists with a sound that's similar (though not identical) to Izibor's -- Kindred, Trina Broussard, Alicia Keys ... hell even Arie -- but most don't make it to heavy rotation for the masses to hear.

Honestly, "From My Heart to Yours," the first single from Izibor's soon-to-be-released debut album, Let the Truth Be Told, sounds so out of place on radio that it makes you wonder if execs at her label, Atlantic, pulled guns on some program directors to get it on the air.

"Maybe they have been bringing some guns down! I don't know. I don't really care. It's happening, so I'm happy!" laughs Izibor, speaking via telephone. "We were very lucky when we first came [out], probably four of the biggest stations came on board. They'd seen me perform. They bought into me as the artist and liked the song. And they said, 'You know what? I'm gonna go out on a limb.' And then the other [stations] kinda go: 'If they're playing it, let's try it out.'"

Sure, compared to most of today's urban hit-makers, Izibor is a musical oddity, but born and raised in Dublin, Ireland, she's a geographical oddity as well.

Her being a black Irish soul singer undoubtedly takes some folks by surprise ... but when you look at her situation from a historical perspective, it shouldn't be all that shocking. Irish music fans, it seems, have been fascinated with African-American popular music for decades -- from Paul Robeson's labor-oriented hymns to U2's reverence for R&B icons like BB King and Chuck Berry to relatively new white bands like The Script, who blend rock with stuff like hip-hop and more. Still, Izibor may be one of the first black artists from Ireland to perform soul music for a wide audience.

"I'm the first I think to be doing the kind of music I'm doing," she says. "It's a really nice place to be -- to feel like you're sort of breaking down barriers and taking those first steps. It's nice. It's not something that's very difficult. I'm just doing me. And in that, it seems to be a first for a lot of people."

Growing up in Ireland, Izibor's propensity for making music was apparent at a young age. She started digging the sounds of Stevie Wonder and Marvin Gaye when she was 13. By 15, she won the national performance competition known as the "2FM Song Contest." By 17, she started what became a four-year process of recording tracks for her debut album; as she recorded, she also started performing live, serving as the opening act for artists like James Brown, Angie Stone and The Roots. And as she's trekked around the globe to promote Let the Truth Be Told, she even recently had the chance to rub shoulders and trade barbs with Stevie Wonder, one of her (previously mentioned) musical idols, during a taping of his radio show.

"[When she met Wonder], everyone was like, 'You're very cool Laura.' But inside I was like 'Keep it together Laura! Hold the shit down!'" says Izibor. "When I walked in [the studio] he was singing, 'From my heart to yours ...' and I was like 'Walk out again, take some deep breaths and come back in!' When he starts singing or talking, every video he's done starts flashing through your head. And he's crazy. He's like a comedian. I didn't know he was that funny."

That's a lot of success for an artist who's barely in her 20s, but Izibor is determined not to let it all go to her fluffy afro and avoid having her life mirror the second act of an episode of Behind the Music.

"I definitely have that on my to-do list: Do not become a drug addict," she says with a laugh.

But that's not to say she never got her party on. "I got my wild years out of my way before my album was [finished]. I think 19 or 20 was a little bit 'Whoo! Rock 'n' roll!' I'm kind of done now," Izibor says. "We all need to go and party too much or drink too much or do stupid things, then regret them and then get tired of it. I've done that. And it's nice now to be content to just -- I sound like an old woman -- to stay in and write as opposed to being like, 'I wanna go out! I wanna get drunk. I wanna party!' Thankfully I'm really not there."