Legally Blonde — A Musical: An ocean of pink at CPCC 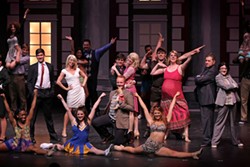 With one less musical on tap for 2012, CPCC Summer Theatre seems to have reached the last week of its 39th season in the blink of an eye. A somewhat shabby-looking, beautifully sung Guys and Dolls was followed by a really snazzy — but underpowered — Noises Off at Halton Theater, paired with a truly tacky Rapunzel that entertained the anklebiters at Pease Auditorium. While I wish mainstage subscribers could have savored Tyler Smith, the cross-dressing Wicked Witch in Rapunzel, the new collegiate talent at the Halton — Charity Ruth Haskins, Haley Henderson, Michael Moore, and Ross Neal — seemed destined to find their proper métier when Legally Blonde — The Musical opened last week.

The fab four musical theater majors didn't have to leap far to belong at the main Legally Blonde locations: the campus of UCLA, where Elle Woods loves and loses Warner Huntington III, and the campus of Harvard University, where Elle pursues Warner — and finds herself. As Elle, Henderson surpassed my expectations, especially as the pink-clad, bunny-suited pursuer who unexpectedly blossoms into a standout law student. Nearly equaling the stars of the Broadway production and national tour, Henderson overcame a couple of daunting disadvantages, a blonde wig that was nearly as bad as the joke Rapunzel wore, and a wayward Halton sound system that effectively bleeped every song she sang. Henderson's verve and vitality remained undimmed by the onslaught.

Dancing with the blondes

Part of the sensation Henderson creates stems from the sheer drive of her dancing, a facet of her talent that was under tight wraps when she was the Salvation Army prude seduced by Sky Masterson in Guys and Dolls. Every time she's front-and-center in one of choreographer Ron Chisholm's inventive — and demanding — ensembles, Henderson is pure exhilaration. Much the same can be said of Haskins as the lead chorine when the high-kickingest of Henderson's former sorority sisters form — wait for it — a fantasy Greek chorus. Except for the pure part: costume designer Laree Lentz usually contrives to clothe the shapely Haskins scantily, most memorably in a tight tiger-skin print.

Proving that Lentz is an equal opportunity objectifier, Neal wears an equally tight set of brown shorts as Kyle, the UPS man who has what patrons at Paulette's beauty salon breathlessly describe as a package. Curiously, but delightfully, Neal doubles as Paulette's ex-boyfriend Dewey, the scuzball that Kyle will ultimately replace — with a flourish of Irish step-dancing. Moore, the conspicuously underaged Nathan Detroit who was stringing Miss Adelaide along for some 14 years, is far less underaged here as Emmett Forrest, the legal intern who mentors Elle and falls helplessly in love with her. In fact, since his mike was working consistently, Moore was the most affecting performer onstage as he watched Elle's insane pursuit of the cad who spurned her.

Surely the budget they gave designer Robert Croghan made him laugh or wince, but he worked wonders with the sets and drops we see, although one of those drops made a comical U-turn before the climactic courtroom scene on opening night. You won't see anything like the Broadway razzle-dazzle for the opening scene costume changes at the UCLA sorority house, but the closing tableau is remarkably similar. In between, the Delta Nu sisters' peppy vocals were ominously unintelligible backing up Elle's bubbly "Omigod You Guys," as the campus queen fretted over her couture anticipating a marriage proposal from Warner. One of the best tunes in Laurence O'Keefe and Neil Benjamin's score, with or without a lyric.

The backup became better as we moved along, thanks largely to director Tom Hollis' impeccable casting. After her majestic Witch in Into the Woods two years ago, it's startling to find Olivia Edge as the wholesome trailer-trashy Paulette, but she's pretty damn good at it, getting maximum mileage from her outré "Ireland" solos. More predictable, in the wake of his robust Nicely-Nicely Johnson, is Beau Stroupe as Professor Callahan, the terrorizing taskmaster of Harvard Law School, lascivious enough to hit on Elle when the opportune moment presents itself. He fairly hits his spotlight song, "Blood in the Water," out of the yard.

A modest presence in the Tinhorn Trio last month as Benny Southstreet, Mitchell Dudas steps forward handsomely as Warner, though the labyrinth of his character sometimes appears beyond his depth. Adapted from the film by Heather Hach, the script builds Warner III out of an irreconcilable contradiction. He's an heir with an assured future in California politics, yet he feels desperately compelled to win favor with Professor Callahan and become one of his elites. Hasn't he heard of George W. Bush? Dudas makes Warner sort of likable at first — the dreamboat Elle thinks he is — but he's hard to fathom at Harvard, neither cutthroat nor sycophantic enough to succeed.

One or both of those attributes is necessary to paper over Hach's failure to endow Warner with enough brains to get into Harvard in the first place. At least Elle's admission is presented as an absurdist testosterone farce, complete with a marching band and majorettes replacing her application essay.

An air of silliness creeps in elsewhere with Hollis' approval, as Ericka Ross presides over her courtroom with a demeanor that reminded me of Sammy Davis Jr.'s "here come da judge" tenure on Laugh-In. The role of accused murderer Brooke Wyndham is a healthy new direction for sometime choreographer Alyson Lowe, who gets Act 2 off to an aerobic start fronting "Whipped Into Shape" at a women's prison. Blonde to the core (or nearly), with some effective diva highlights, Lowe's a natural for the Delta Nu nonsense that bonds her more deeply to Elle than anyone else on her Harvard Law defense team. Cassandra Howley Wood as the prosecution's ultra-permed star witness is also a natural.

Music director Drina Keen drives this pedestrian score with enough vim and vigor to make it sparkle. There's an ocean of pink to entice us and — just when we need him the most — the cutest little Pomeranian. With luck, this week the star will be outfitted with the best mike in the house instead of the worst, and Elle will be well.