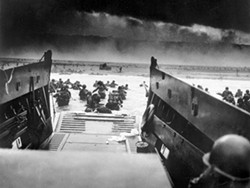 Katharine Phillips may be Ken Burns' new Shelby Foote. Phillips, of Mobile, Ala., is one of the more than 40 "voices" who share memories and insights in The War, Burns' astonishing new PBS documentary series about America in World War II. Like Foote, whose sharp wit and bourbon-&-honey Mississippi tones helped anchor Burns' The Civil War series, Phillips is smart as a whip and speaks with a terrific accent. Unlike Foote, she isn't a scholar or "expert" but, also unlike Foote, she lived through the war she talks about. In fact, her astute recollections of the home front -- delivered in a charming, flamboyant Deep South accent (upon hearing about Pearl Harbor, "We realahzed immediately that this would be wahw") -- are one of the things you'll remember most about Burns' series.

Burns always draws on "voices" to enrich his films, but this time he replaced his usual assortment of experts with an inspired collection of articulate eyewitnesses comprising veterans and loved ones on the home front. They keep The War on a human scale without minimizing the wide sweep of history in which they were caught up.

As viewers are reminded at the beginning of each episode, "the Second World War was fought in thousands of places, too many for any one accounting." So Burns and co-producer/director Lynn Novick, who spent six years on the film, kept from drowning in the enormity of their project by limiting it to a purely American perspective. Then they narrowed the focus further, to four American towns -- Mobile, Sacramento, Luverne, Minn., and Waterbury, Conn. -- and took a few representative stories that would offer a wide array of wartime experiences. As Burns told a reporter recently, "We get to know the towns; we know the specific addresses where people live. And then we follow the sons off to hell."

The War weaves the "voices" in and through a wealth of stunning, at times horrific, war footage -- much of it rarely seen before, and a surprising amount of it in color. The result is a masterpiece of documentary art in which Burns and Novick manage to convey the full force of the greatest, most widespread man-made calamity in history, while imparting how everyday people experienced the war in real life. And they do it for over 14 hours without ever faltering or breaking stride.

The series also examines the racial segregation of the U.S. armed forces, as well as the internment of Japanese-Americans, some of whom went on to win medals fighting for the freedom their families were denied.

We see battle scenes, valor and heroism aplenty, but we can't help but be reminded of the awful price that was paid for the victory over fascist militarism.

Above all, we see and hear Burns' "voices," painting word pictures and giving us a feel for what those years were like. They are the heart and soul of The War. You'll feel as if you know them by the time it's over, so go ahead and meet a few of them:

Glenn Frazier, an Alabaman who fought for four months in the jungles of Bataan, was captured, endured the Bataan Death March, and spent the rest of the war in slave labor camps in Japan.

Quentin Aanensen, a farm boy from Minnesota who became a P-47 Thunderbolt pilot, and flew 75 combat missions in Europe. His experiences and recollections are unforgettable.

Robert Kashiwagi, the son of an immigrant farmer, went with his family to a Colorado internment camp, volunteered for the all-Japanese-American 442nd Regimental Combat Team, and served in Italy and France.

Ray Leopold, a married man from Waterbury, was an expert rifleman in Europe but was so skilled at first aid that his commanding officer made him a medic.

Sascha Weinzheimer of California was 8 years old and living with her family on their sugar plantation in the Philippines in December 1941. She spent the rest of the war in the Santo Tomas Prison Camp in Manila.

Tom and Olga Ciarlo, brother and sister of "Babe" Ciarlo, who was drafted out of a Waterbury factory in l943, and whose experiences, and letters home, form a riveting part of Burns' documentary.

Emma Belle Petcher of Alabama worked assembling bomber parts in Mobile, and became one of only two women to be put in charge of quality control as an inspector.

Pete Arias, whose parents came to California from Mexico, joined an elite commando group, the 2nd Raider Battalion. He fought on Guadalcanal, Bougainville and Iwo Jima, where he was seriously wounded.

Paul Fussell, from Pasadena, was a 2nd lieutenant in an infantry division in France. After the war, he wrote scholarly books about the experience of warfare and how societies choose to remember it.

Daniel Inouye of Honolulu saw Japanese planes fly over his neighborhood on Dec. 7, 1941. Initially considered an "enemy alien," he eventually won the Congressional Medal of Honor in Italy, and spent nearly three decades as a U.S. Senator.

I grew up around grown men who served in the Second World War but rarely talked about their experiences. Hearing Burns' "voices" opening up was remarkable, and confirmed why most returning soldiers were tight-lipped. As former bomber pilot Quentin Aanensen explains toward the end of The War, "There are casualties in war that never show up as casualties, they're internal casualties. We all changed. We went out as a bunch of kids -- war is fought by kids -- and we came back, maybe looked the same, but inside we were so different. They thought we were just odd, I guess -- 'What happened to Quentin? What's wrong?' -- and I was thinking, 'Nobody knows. Nobody understands. And I am not good enough with words to be able to tell them.'"

It's the open, nuanced recollections of witnesses like Aanensen -- or like Katharine Phillips, waiting for her brother to come back from "that horrible wahw" -- that make Burns' new series so moving. They also make you wish you could hear from the more than 400,000 Americans who didn't come back. As World War II proved, war is indeed sometimes necessary. But it also proved that war is truly hell on earth, so you better be damned sure it's necessary before starting one.