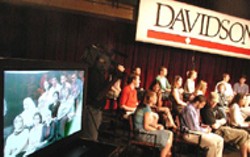 During the war in Iraq we got used to the blaring headlines and adrenaline-stirring fanfares of FOX News, CNN and the 24/7 News Channels. Last Thursday, in a small university town of 7,000 some 20 minutes north of Charlotte, another kind of television history was quietly being made.One hundred fifty Davidson College students filed into the student union auditorium while an ocean and a continent away, 100 Iraqis gathered in a lecture hall in Baghdad. For two hours, Davidson students talked to knowledgeable and articulate Iraqi citizens, each side confronting and dispelling myths and overcoming cultural, political and physical barriers.

The event was arranged by Professor James Zogby, a visiting faculty member and the director of the Arab American Institute in Washington. His counterpart in Baghdad was Jaber Obaid, the "Tom Brokaw" of Abu Dhabi Television, as Zogby explained.

The Davidson students asked the Iraqis: What was it like living in post-Saddam Hussein Iraq? The answers were disturbing, sobering and disillusioning. Did the Iraqis see the US in Iraq as "liberators" or "occupiers," Zogby asked. Of the more than 100 Iraqis assembled in the hall, only five or six raised their hands at the term "liberators." The other 95 percent of the Iraqi panel, which included Shiites, Kurds, and Sunnis from all parts of the country, viewed the Americas as occupiers pure and simple. If they had had any doubts about it at the beginning, the exclusive protection of the oil fields to the neglect of other vital sites -- hospitals, educational facilities, the National Museum with its irreplaceable collection of historical and cultural treasures -- convinced them.

Speaker after speaker said the American government had clearly lied to them and the rest of the world, that all the talk about "freedom" and "self-government" was, as far as they were concerned, mere window-dressing.

More than simple callousness or lack of planning, the speakers felt there was a coordinated effort at the highest levels of American policy to allow the conditions of chaos, looting, and devastation -- what better way to insure Washington's continued presence in the country and the construction of a puppet government under its domination. They wanted the US out now, and they themselves would deal with the consequences of reconstruction -- the US was doing more harm than good and its motives for the future, for the oil industry in Iraq, only boded more disillusionment, more suffering, more looting of the country and its resources.

The Davidson students were clearly taken aback, but for the most part listened respectfully, wanting to hear what the Iraqis had to say. They began to dispute among themselves. One student, John, was particularly articulate in presenting the Bush Administration position. He told the Iraqis to have patience -- that it took time to instill democratic institutions and values.

Another student, his cap jammed down over his head and his long lanky body sprawled out in a lounge-chair position, suddenly sat up. He turned to the speaker: "John, you're asking these Iraqis to have patience in what is for them desperate circumstances. Where was your "patience' in the days before the war? Where was your willingness to play out all options before sailing in and bombing the country into oblivion?"

And so it went. American students talking to each other, and to Iraqi citizens -- directly. It was a remarkable experience. The intensity in the room was palpable, relieved only during breaks by Zogby's best efforts to cut the tension with jokes as technicians scrambled on either side to maintain or resume connections. There was a strange, rough quality to the broadcast, with a several-second delay between questions and answers. The video/sound signals were bouncing by satellite to London, and then by satellite relay on to Baghdad, but then returning to Davidson, also by satellite -- four bounces, adding up to the long delay. Occasionally the satellites would be lost over the horizon due to a mountain range or other interference and the connection would be lost entirely. The Adu Dhabi technicians had to re-shoot the coordinates to resume. At these times the satellite image would freeze, turned to checkers and then degenerate on the screen. But these "glitches" only added to the excitement.

Approximately 35 million people -- about the same number as watched the final episode of Joe Millionaire -- viewed the frank exchange of the Davidson dialogue with the Arab world. But relatively few Americans saw the dialogue unless they happened to have Worldlink TV.

There was more drama, more true reality, more suspense in this simple scoop-to-scoop television experiment from Davidson, NC than in all the Hollywoodized 24/7 coverage of all the news channels put together.

It hadn't cost that much -- nothing in comparison to the technology and deployment of reporters and "experts" on the cable news channels. Hopefully, direct, televised dialogues between citizens of different countries will become more commonplace. If more people were seeing these kinds of dialogues, you have to wonder how it would influence them when they pull the voting machine levers next November.

Bernard Timberg was the chair of the Communication Arts Department and director of the telecommunications internship program at Johnson C. Smith University from 1998-2001. He has recently completed a book on the history of the television talk show, Television Talk, which looks at the role of television in American culture and public opinion.