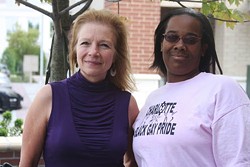 Black Gay Pride is one of two annual local events designed to recognize gays and lesbians in Charlotte. The other -- dubbed Pride Charlotte -- takes place this year in October and reportedly targets gay people of all races; but, since its inception in 1994, attendance at Pride Charlotte has been predominately white. In response, CBGP was formed to give black gays and lesbians a chance to see people who looked like them celebrate their pride.

During the first CBGP, Monica Simpson, one of the founders, told WCNC-TV: "It's really hard for people speaking just from the African-American perspective to really come out and to be proud and to be able to walk fearlessly in any situation."

This year, however, there's something different about Charlotte's Pride celebrations: The groups organizing the events are collaborating with each other -- something that's never happened before.

In the past, the two Prides were bookend events with CBGP happening the second weekend in July and Pride Charlotte occurring the following weekend. But at the end of last year, Norvell incorporated CBGP as a nonprofit organization and completely overhauled the group's board. That also led to the theme of the 2010 CBGP celebration: "Engage, Enlighten and Empower."

"Some of the separations [between the Pride events] were happening because of particular people on both boards, so Denise Palm-Beck [co-chair of Pride Charlotte] made changes on her board as well," Norvell said. "Between the two boards and our relationship we decided that we could bring Prides that celebrate and honor both cultures and lifestyles in this community."

The partnership between the two groups began last year, said Palm-Beck, when she applied for a grant from the Wesley Mancini Foundation through the Charlotte Lesbian and Gay Community Center, where she serves as the board chairwoman. The center was awarded $2,000, which was split with Pride Charlotte and CBGP for marketing and advertising.

But money aside, Palm-Beck said watching Norvell reorganize her group impressed her and she wanted to extend support to the celebration.

"I had so much admiration for her sticking with the plans in the face of these reorganizations and being a strong individual not being brought down by negative individuals," she said, "I just wanted to do everything that I could to support her."

According to Palm-Beck, neither she nor Norvell wanted their partnership to end after the money from the grant was divided. So, in early 2010 the partnership continued with CBGP holding organizational meetings at the Lesbian and Gay Community Center, which were attended by Palm-Beck.

"We're doing things together, and that's the way that it should be," said Norvell. "If you close off yourself, what you get from that is you get division. We practice and we preach unity in community -- but how can you do that when you're excluding the community?"

Norvell said that some people were put off by the word "black" in Charlotte Black Gay Pride and thought that the event wasn't welcoming to nonblack people.

"That was one of the biggest challenges, and that was never, ever meant to be the case," she said. "My mother is mixed and my grandfather is white. For me, I've never had this big division where blacks do this and whites to that. I understood it and I knew it, coming from parents from the '60s; however, it wasn't anything that I had to present in my life. So, I don't understand how you don't have relationships with people of the opposite race. And why isn't it that we can't work together?"

Norvell said she reached out to fix that, and she expects that some people may not agree and CBGP could lose some supporters. "But that's OK," she said. "In the end, it's going to be a bigger event for us."

She also added that when the LGBT community comes together as a whole, it allows more attention to be focused on serious issues.

"I'll give you an example," she said. "Mecklenburg County has the highest rate of African-American males that are [HIV] positive as well as having syphilis. It is more relevant in the black LGBT community versus the Caucasian community. In Charlotte, how do you attack that? Everyone should be concerned because it is a big thing, but the truth of the matter is that some people aren't concerned if it's not affecting their people."

For more Pride information, log on to www.charlotteblackgaypride.com and www.pridecharlotte.com.