It's a perfect circle. 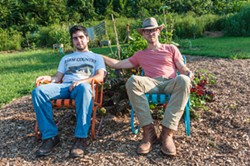 Temperature and time, the two things needed to break food down into its most elemental components. When given both, leftover and unused food scraps can cycle through the decomposition process, transforming back to the organic matter from which it came. A full-circle moment courtesy of Mother Nature.

The result is compost. Nutrients. Fertilizer and a chemical-free way to encourage food production. Enter Crown Town Compost, a big idea for a small-scale, community-based program to reduce food waste in residential neighborhoods.

A year ago last summer, Kris Steele, 29, and his then-fiance moved into the bungalow-lined streets of the historic Wilmore neighborhood just south of uptown. The young couple, bright-eyed and environmentally conscious with a smidge of hipster built into their makeup, quickly attached themselves to the Wilmore community. Steele hosted potluck dinners ripe with idyllic conversations about ways to better the neighborhood.

"Those conversations eventually turned into concepts, and one that stuck was a backyard garden," says Steele, who works in marketing and technology. Pretty soon, he had ripped out his driveway to plant garden beds, built a greenhouse and a chicken coop and began to utilize his space to grow food in the historic neighborhood that is also classified as a food desert, an area of the city with limited access to fresh food. While working on the garden project, a county research study came across his desk at work about the issue of food waste.

Besides the nuisance of mass within local landfills, the problem with food waste is its effect on air quality. When food begins to break down anaerobically it releases methane gas, which is 1000 times more potent than carbon dioxide, a real recipe for air pollution because of its ability to trap heat in the atmosphere.

The study prompted Steele to look at ways to reduce food waste within his neighborhood and divert it into something more useful. He came up with compost.

The act of composting provides a closed-loop system, one where waste is reduced or eradicated completely by utilizing leftover food waste to create nourishment for the soil by way of organic matter. The county calls composting a food-waste diversion, a solution that keeps waste out of our landfills, or our waste stream. Mecklenburg County has pledged a 35 percent reduction in food waste by 2018 and is currently working with commercial composting facilities (there are five within 60 miles of Charlotte) to maximize the capture and diversion of food waste. The city is looking into residential programs to do the same.

Crown Town Compost is Steele's hyperlocalized vision to do his part. The business, Steele says, aims to tackle three specific tenets: reduce food waste, enhance the soil and reduce air pollution. Crown Town Compost will utilize two composting methods: bokashi and vermicomposting. Bokashi literally means fermented organic matter in Japanese and is an odor-free way to contain and expedite the composting process. In a closed container, food scraps are added along with microorganisms contained in wheat bran to facilitate the composting process. Vermicomposting uses earthworms to break down food waste and turn it into a nutrient rich soil amendment, a nutritious product for soil, called worm castings, or "black gold" as it is known in gardening circles.

On a more personal level, Steele and his Crown Town co-founder David Valder, 22, wish to build up communities within communities, which is why they chose the Wilmore Community Garden as CTC's first partner. Steele has a verbal commitment to begin composting within the lush, active community space and is waiting on final approval from the garden's board members. Ten houses in the neighborhood will serve as the pilot group.

The pilot participants will receive a five-gallon bucket with a lid and lined with a disposable bag to fill with food scraps that will be collected on a weekly basis, similar to garbage collection services. Once they begin service, they estimate pick-up costs at $3 to $5 a week, or the cost of a latte. What makes Crown Town different is a commitment to a low-carbon footprint and accessibility. Steele, a cyclist, wants to use bikes as the primary form of transportation for hauling compost within neighborhoods. A similar project in Austin called Compost Peddlers has enjoyed success.

On the back end of Crown Town Compost, Valder, a recent graduate of Appalachian State, has been working with the city and state to sort out the red tape as it pertains to zoning laws, code enforcement and hauling permits so that the business can operate legally.

Thus far, Crown Town will serve as an accessory within the neighborhood garden structure, removing food waste from households, composting it within the garden space and returning it to the soil to grow more food. Within these parameters, Crown Town Compost can, per the city, bring in up to 1,000 pounds of food waste per week. Though it's a good start, 1,000 pounds is limiting so Crown Town is looking for other partners to learn more about capacity and the nature of scale.

Henry Owen, program director at Friendship Gardens and lead at the Urban Farm, a new project at Garinger High School, has donated a 100-by 100-foot space for Steele to experiment with his composting model.

"We have always viewed this space as a place for creative people to try out creative solutions," says Owen. "I am always up for allowing something new and innovative to blossom on the farm."

For Owen, he hopes this will provide opportunity for his students to learn about composting and would like to see the compost reinvested into the soil that grows food for Friendship Trays, the meals-on-wheels program attached to Friendship Gardens. In the long term, Owen hopes the composting model can reach his 75-garden network.

In addition, local commercial businesses have expressed an interest in working with Crown Town Compost. So far, Luna's Living Kitchen, Not Just Coffee, Pure Pizza, Central Coffee, Lenny Boy Kombucha and neighborhood gardens in Villa Heights, South End and Morningside want to participate in the program once it is fully realized.

This pronounced interest has led to further conversations with larger composting facilities in the area, including ReOrganics, a vermicomposting facility created by the large-scale vegetable producer Foster-Caviness; and Earth Farms, a large composting facility located in Gastonia. Once Crown Town Compost can procure a solid waste hauling permit, it can grow past the micro-site model and begin disposing excess food waste on a larger scale. Currently, commercial composting operations handle over 36,000 tons of food waste per year, with an estimated 30,400 tons of unused capacity within those facilities. The impact of such partnerships is poised to do much good in Mecklenburg County.

The act of composting extends past environmental justice, says Valder.

"We want to enrich communities and their relationship to the land, give them a broader sense of responsibility to their neighborhood and their city and, ultimately, the world."