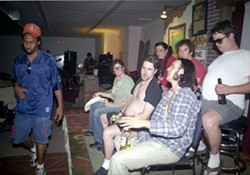 I had gone to the room of many couches to watch a rehearsal of Charlotte's sketch-comedy group the Perch for this week's cover story -- not to join the group.

But after filling in to read a line for an absentee member, Perch founder Shannan Brice invited me to join the cast for two weeks of shows. I took her up on the offer but warned her that I'm more comfortable hiding behind my printed words and that I'd rather do only small acting roles. The group agreed that if I wrote a sketch that didn't suck, we would perform it. I would need to impress six to seven funny people.

At the next rehearsal, before going over my sketch, I was so nervous my hands were shaking. When I write jokes for print, I don't follow readers home to see what gets the LOLs.

The premise of my bizarre sketch is a truth or dare spin-off called truth or lair, set in the Himalayan Mountains and involving Sherpas. Here's a little sample of the sketch:

A married couple walks past two kids playing the game, and the man, Mitchell, says: "What an odd place to play truth or dare, next to a creepy lair on a treacherous mountain pass."

His wife, Tamara, responds: "Oh, Mitchell, let's play. You never want to do anything spontaneous."

Mitchell: "I thought it was pretty damn spontaneous to quit National Fidelity and fly to India -- on the redeye, no less. Charter a helicopter during a blizzard, crash into the riverbank, eat our pilot and hike this treacherous mountain pass without gear or one of those mini-man guys. I'm not even acclimatized."

Tamara (sighing): "Everyone eats the pilot."

Success! The whole cast laughed. (Maybe you had to be there?) It was my first joke to go over well, after a couple that got small laughs. It soon became clear that I have no idea what will get laughs and what won't, which is the lesson I took away from the whole experience.

The Perch doesn't hide its dirty content. It rates itself R. Before my first show, Quay Rogers, who normally opens the group's shows with some stand-up, decided to play Daddy's Game with the audience. The game consisted of asking each member of the audience their name, birthplace and favorite sexual possession.

Backstage, by a set of lockers filled with props, a cast member nicknamed Pork Chop read a singing children's book. "Come on in. Meet my family and friends," invited a little kid voice from the book.

"There are no songs in here, it's all learning stuff," he said, legitimately disappointed. Pork Chop can tell you the location of any river, capital and mountain range in the world.

"The IQs of [the Perch cast members] are off the charts," said Candy Cortinas, a fan who eventually got involved in helping run the shows.

Rodney Guillory, a master of comedic timing who seemed disinterested in rehearsal, was full of energy before the show, pacing back and forth. "He pops for the performance," Quay told me. When Nikki Frank, the newest member (aside from me, of course), was on the stage, Rodney couldn't contain himself. "She's such a fucking genius," he said of Nikki, an improv veteran. "What did I tell you? Don't think Quay isn't brilliant too."

In the 20-minute break after the 9pm show and before the 11pm, cast members walked over to Elizabeth Billiards for a quick libation (or two).

Shannan and Candy told me new cast members tend to overdo the funny, trying to prove their hilarity to the other cast members. To me, every conversation felt like a funny test.

At the bar, seven-year Perch veteran Quay was guzzling his second whiskey and Coke, singing along to OutKast's "Rosa Parks." He turned to me: "Do you know what crunk'd is?"

"Yeahhhh," I said, buying myself time to think of a funny answer. "It's a state of mind."

"What state of mind? How does one become crunk'd?" he continued.

"It's very sober. Very calculated. Very with it. Like how you feel before you sit down to study," I said.

"No. No. No. You obviously know what it means because you said the exact opposite," he said in a stage voice like he's acting out a scene.

"No, I have my black card in my pocket."

"Play the card," I said, slapping the table. Test passed.

Back just in time for the 11pm show, a large crowd had gathered on the couches and futons, with which Shannan chose over chairs to furnish the theater. Before the show, the energy was good. Then, like a strange force of nature, the energy got sucked out of the place. First, the stand-up went over poorly. After that, the first sketch, a song parody about Waffle House that I was in is met by cold, blank stares.

Even the "Self Mutilators" sketch, which made me laugh the six times I'd seen it before, got only sparse chuckles. The premise, according to Rodney and Nikki: "We discuss current events and mutilate ourselves according to the severity of said events."

In the sketch, Nikki, dressed in all-black and an obscene amount of black make-up, said: "My first article exacerbates human selfishness, which runs rampant in human beings. It has to do with the enslavement, torture, imprisonment and encapturing of Asian and African adult and baby elephants. These animals are being forced to stand on their heads! They weigh 8,000 pounds! If you weighed 8,000 pounds would you be satisfied with a peanut for dinner?" What was gold to me and other audiences is no longer. After one laughless sketch, Pork Chop tried to add levity by simulating the sound of a bomb dropping.

Backstage, cast members walked brusquely past each other to change wardrobe. "If they're not going to laugh, fuck them," said Rodney, who seemed to be taking it personally. Even Candy, by the door, struggled to make eye contact with others.

Despite the last bad show, joining the Perch for two weeks was one of the more fun experiences I've had in Charlotte, and I got an official invite to join the cast. "Stick around for a few minutes," Rodney said to me in the parking lot after the show. "It should be interesting."