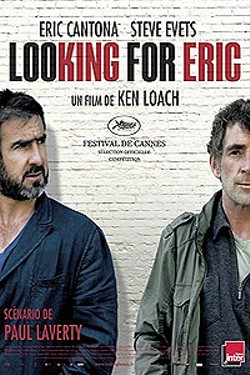 Eric the postman is slipping through his own fingers. His wife has gone, his stepsons are out of control and the house was chaotic even before a cement mixer appeared in the front garden. Life is crazy enough, but it is Eric's own secret that is driving him to the brink. How can he face up to Lily, the woman of his dreams that he once loved and walked out on many years ago? Despite the comical efforts and misplaced goodwill of his mates, Eric continues to sink. In desperate times it takes a spliff and a special friend to help a lost postman find his way, so Eric turns to his hero: footballing genius, philosopher and poster boy, Eric Cantona. As a certain Frenchman says "He who is afraid to throw the dice, will never throw a six."

Looking for Eric is not showing in any theaters in the area.