Low-Performing Schools? We Don't Think So 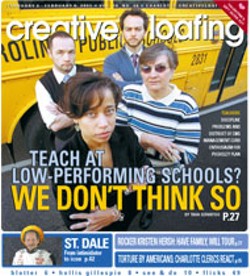 Charlotte Mecklenburg Schools Superintendent James Pughsley has finally gotten serious about bringing some of the system's most experienced teachers to its neediest schools. But many teachers don't like the plan and have no intention of teaching in the system's lowest performing schools. The superintendent took a beating in the media after Superior Court Judge Howard Manning, Jr. publicly faulted CMS management for test scores that are significantly lower than those in Wake County despite relatively high levels of funding. Coming close on the heels of Manning's criticisms, Pughsley's plan has been met with skepticism by some teachers who feel the superintendent may be merely covering his own, um, bases.

Take the example of West Mecklenburg High. Few schools have a worse reputation among the county's teachers than West Meck. For those who don't teach there, West Meck is an illustration of everything they believe is wrong, or even frightening, about our school system. Several CMS teachers we spoke to last week mentioned being transferred to West Meck, or a school almost as bad, as part of their "worst case scenario." What would they do if told they had to teach there? They would quit, just like 31 percent of the teachers who taught at West Mecklenburg did last year and the year before.

The irony of the situation is that there aren't many teachers who are opposed to Pughsley's stated goals for the worst performing schools (known as EquityPlus schools). In fact, many CMS teachers think the goals are overdue. But according to the results of a recent survey of teachers, and our conversations over time with a variety of teachers, two things keep many of them from supporting Pughsley's initiative: discipline problems and, perhaps even more telling, a critical lack of trust in the CMS bureaucracy.

According to a survey by the Classroom Teachers Association released this week, 94 percent of those who responded said they opposed Pughsley's plan to involuntarily transfer teachers to low-performing schools if efforts to recruit volunteers to those schools with incentives fail.

About a third of the teachers in the Charlottte Mecklenburg school system are members of the CTA, and 424 responded to the survey. Nearly half of the respondents said that if they were forced to go to a low performing school, they' would leave the school system. Another 38 percent said they might leave.

At the heart of Pughsley's plan, which is still being developed, are promises to clean house at many of the county's low-performing schools, all of which have high concentrations of poor and/or minority children. The plan essentially promises to weed out problem administrators, use "headhunter" firms to recruit better principals, and then give them wider latitude to run their schools. The schools would be staffed with extra support personnel to deal with everything from social problems to uninvolved parents to discipline.

The district will offer talented teachers from both inside and outside the district an extra $10,000 a year for three years to teach in equity schools. If they stay the full three years and meet certain goals to be defined later, they'd be able to collect the full $30,000 from an escrow account. But if enough teachers don't volunteer to teach in struggling schools that meet "crisis" criteria, the administration would transfer accomplished teachers to the schools whether they wanted to go or not.

For a school system that barely moves when prodded, this plan is practically revolutionary. In fact, it may be revolutionary in its own right.

"There is no place we are aware of that forces teachers into low performing schools," said Michael Pons, News Media Services manager at the National Education Association.

Eric Hirsch, Vice President for Policy at the Southeastern Center for Teaching Quality, applauded the plan, up to a point.