Tradition lives on in Davidson 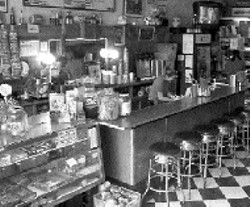 Raccoons, bluebirds, toads, and turtles are not the only victims of the Charlotte metropolitan area's sprawl and urbanization. Also rapidly vanishing are the area's long-standing restaurants -- those places that add character to our culinary repertoire. Thus, if only to maintain a few distinctive spots, it pays to patronize the ever-decreasing number of these neighborhood restaurants which have unassumingly and admirably been serving local folks for years.

One such place is Davidson's The Soda Shop located in a turn of the century building across from the Davidson College campus. The space originally housed the Davidson post office and then became a general store. In 1951, Murray Fleming and Mary Potts opened the M&M Soda Shop, a fountain service establishment without a kitchen. Potts created many of the recipes that would become the most requested items on the menu: chicken salad, pimento cheese, egg salad, and cream cheese and olive. Davidson College students flocked to her counter for an orangeade, AKA the Big O, which was thought to be a remedy for a hangover.

After Fleming's death in the 1980s and with some health issues of her own, Potts decided to retire and sold the M&M to Ann Overcash in 1985. But by October 1989, Overcash had closed the business and was looking for buyers. Davidson residents and Davidson College students were alarmed that this venerable local institution might not reopen. The next spring, however, a former Davidson student, Cameron Zurbruegg, came to the rescue by buying the shop, although Overcash retained the rights to the "M&M" part of the name. Zurbruegg also coaxed the 76-year old Potts out of retirement and back into a newly built kitchen. Soon, though, the shop changed hands again, this time going to Davidson locals Jay and Carrie Wade.

Deborah Caudle, the current owner, bought the Soda Shop in July 1993 from the Wades. Caudle first visited the restaurant when she came up to Davidson for a soccer tournament in 1992. She remembered she remarked to a friend how she would like to own a place just like it.

"That next March," she reported, "I opened the newspaper and saw Allen Norwood's column about the Soda Shop being for sale. I couldn't wait to call the owner. At 8am the next morning I called and said I was interested and gave him my number. But he told me he already had an offer. Then in July, Jay called back to say the deal had fallen through and asked if I was still interested. So I bought it."

Before buying the Soda Shop, Caudle had been in the building business with her husband in Charlotte. A divorce prompted the need for change. She noted, "I trained with the Wades for two weeks and then they turned it over to me -- with the dining room literally full of people. They handed me their employees, their customers, and their keys all at the same time." Today Caudle has her kitchen employees use Mary Potts' recipes, which she keeps in a book in the kitchen.

The 50-seat Soda Shop has a timeless quality marked on the walls by pictures of local Y teams, pictures from sports camps supported by the Soda Shop and Davidson College sports memorabilia. Another wall sports an Elvis poster and album jackets. The small dining room is dominated by a long counter, around which servers perform endless circles in order to serve the six booths and handful of tables. Outside are two tables in front and six more out back. Service is harried at peak hours and tips are communally collected in the jar by the cash register.

The Soda Shop's menu is crowded with gems that will convince you how delicious life can be in a small town: chili, hot dogs, Reubens, tuna melts, club sandwiches, and classic sundaes. Caudle has tried to bridge the gap between being an old fashioned soda shop and full service restaurant by adding table service and menu items such as wraps, quesadillas, vegetarian selections, and a kids meal complete with a side and "a gummy thing."

The chicken salad is so good and so simple with its large segments of tender, white meat and thin slices of crisp celery that it lives up to its reputation as the best sandwich in town. The 1/3 pound hamburger could only be improved if you cooked it on your own grill. The beer battered, and greasy, onion rings pay respect to that college tradition. One of the more unusual side dishes is the thin slices of lightly dusted fried sweet potatoes served with maple syrup.

Deluxe Ice Cream, made locally in Mooresville, is used in the milkshakes, Black Jacks, Brown Cows, ice cream sodas and desserts. Deluxe is the brand of ice cream that has always been used in the Soda Shop. For even more nostalgia, try a Phosphate, the original fountain drink with carbonated soda and flavored syrups or the freshly squeezed, tartly sweet Orangeade, Lemonade, or Limeade.

* Owners Atef Shof and Michael Younes have opened Kabob Grill, 1235-G East Boulevard. Shof is also the owner of Middle East Deli on Independence Boulevard. Included on the menu are falafels, kafta, shawarma, fatoush salad, lamb kabobs, and tabbouleh. Hours are Monday through Saturday 10am until 9pm; Sunday 11am until 6pm. 704-371-8984.

Do you have a restaurant tip, compliment, complaint? Do you know of a restaurant which has opened, closed, or should be reviewed? Does your restaurant or shop have news, menu changes, new additions to staff or building, upcoming cuisine or wine events? You can fax this information, at least 12 days in advance of event date, to Eaters' Digest: 704-944-3605, or leave voice mail: 704-522-8334, ext. 136. *