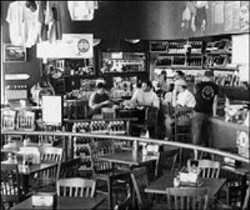 While perusing the 114 beers on the Mellow Mushroom beer bottle list, which includes selections from Germany, Scotland, and England as well as Brazil and Zimbabwe, I glanced up to notice a woman at a neighboring table contemplating a tasting tray consisting of Hoegarrden Belgian White, Franziskaner Dunkel Weisse, Paulaner Hefe-Weizen, and Hacker-Pschorr Dunkel Weisse. She was clearly enjoying herself. On the flip side of the beer list were 55 beers on tap. This is no ordinary pizza parlor. The 125-seat Mellow Mushroom opened a year ago in the refurbished, brick Olde Towne Village Shopping Center. The interior of the restaurant is brightly painted, the large kitchen area open, and hanging overhead are t-shirts for sale and an Auburn University banner. Prominent in the murals are two funky fun guys, er, fungi, Mel and Dude, the company's mascots. The latter 'shroom has a suspicious psilocybinesque head, which isn't too surprising given the name of the restaurant and the fact that Mellow Mushroom was founded by two Georgia Tech students in Atlanta in the early 1970s. "Mellow" was more of a way of life back then, inspiring such things as the song, "Mellow Yellow," which was a hit for Donovan Leitch in the 60s. Franchise owners Tom and Dawn Lockhart plan to open more Mellow Mushroom shops in the Charlotte area this year: one in Cotswold and another in Highland Creek in the University Area in late spring. The Highland Creek site will offer over 100 beers on draft as well as the lengthy bottle list. A shop in NoDa is also in the plan. The theme of the decor in Cotswold, designed by local artist August Schuss, will be "Mel's House" with furniture and family portraits of the mushroom clan. Highland Creek will feature a yellow submarine on the wall. Another Beatles reference is made on the menu in the description of the Gourmet White pizza. Mellow Mushrooms are primarily located in Southern college towns: Charlottesville, VA; Clemson, SC; Auburn, AL; Asheville, Chapel Hill and Boone, NC; and Gainesville, FL. Dawn Lockhart, a native Charlottean, moved to Atlanta with Belk where she met her husband who was in the construction business. They got to know a Mellow Mushroom franchise owner. "They were building a house, a major house. The kind which takes a year to a year and a half to build," says Dawn Lockhart. "We decided it (Mellow Mushroom) would be something we would want to do. The market was wide open in Charlotte, and we could get the whole Charlotte market." Although this is a franchise business, the owners may add to the basic menu. Notes Lockhart, "My husband loves beer. That's the reason for the long list." In addition to the beer, they also offer 25 wines by the bottle and the glass. But they don't have a cruvinet in which to store the open bottles, so if you're buying by the glass, check which bottle was recently opened. Soon they hope to add flights of wine as well. Mellow Mushroom prides itself on the pizza dough, which is shipped in from Atlanta. It is made without sugar and from spring water, high gluten flour, and wheat germ. They call it a "Southern Styled Pizza," which will surely raise the hackles of any pizza aficionado. Mellow Mushroom pizzas are not the New York styled thin, crisp, smoky crusts with fresh mozzarella made in coal ovens. Nor are they like their deep dish Chicago cousins. This dough finds middle ground with the crust more raised at the edge than in the center. All the pizzas come in 10-inch, 14-inch, and 16-inch and range in price from $5 to $21. Slices are available, too. We tried the House Special which had pepperoni, sausage (the Southern kind), onions, green peppers, white mushrooms, black olives, bacon, ham, extra cheese, and slices of fresh tomatoes on top. The only complaints were the bacon, which was limp, the olives, which were precut and canned, and the onions which had become acrid, a result of too much storage time. The Lil Spinach Salad, filled to the rim with freshly picked spinach, mushrooms, tomatoes, but again the limp bacon, is a steal at $2.75. The dressing is served in a side container. Equally fun was the chicken calzone which is defined on the menu as a pizza turnover. This extravagant dish, loaded with tender chicken and packed with cheese, was only $5.60. As many people were having hoagies as pizzas. We tried the Steak and Cheese which was served on a too crisp French roll, a strange choice, but the steak was flavorful and the provolone not overwhelming. All sandwiches are offered as halves or wholes and range from $3 to $5.95. Back in the dim, distant 70s, sprouts and wheat germ appeared everywhere. Here they are scattered throughout the menu. A grilled tempeh hoagie, for example, is served with teriyaki, provolone, grilled onions, green peppers, mushrooms, and the prerequisite sprouts. Mellow Mushroom brings in a diverse crowd. Families fresh from the Harris Y soccer practice fields piled into the restaurant as did groups of older women, and beer lovers. What draws them is a convivial, relaxed atmosphere, and servers who are knowledgeable about the beverage selection. "Thanks for the tip about the lemon with my beer," said the woman at the next table to her server. He just grinned broadly and hurried to take another table's order. Mellow Mushroom 4100-A Carmel Road, 704-341-8236. Kitchen hours are Sunday through Thursday 11am until 10pm; Friday and Saturday 11am until 11pm. Bar remains open another hour. Patio. AmEx, Visa, MC, Dis.