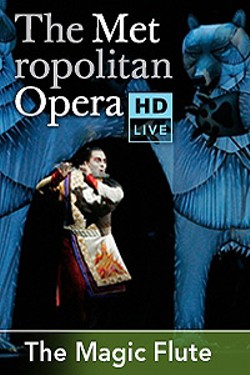 Fathom and The Metropolitan Opera present an encore presentation of Mozart's "The Magic Flute" in select movie theatres nationwide on Wednesday, August 5, 2009, at 7 p.m. in all time zones. Enter a magical world of dancing bears, giant birds, and colorful adventure in Mozart's ever-popular masterpiece "The Magic Flute." This abridged 100-minute version, sung in English, is perfect for opera fans of all ages. Tony Award winner Julie Taymor (The Lion King) directs a youthful cast conducted by Metropolitan Opera Music Director James Levine. This performance was originally presented in December 2006 as the inaugural transmission of the Met's Live in HD series. The production will be sung in English. It is not rated but should be treated as G.

MET Summer Encore: The Magic Flute is not showing in any theaters in the area.