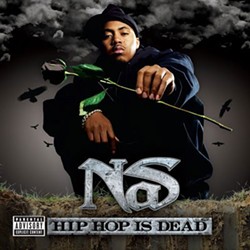 Maybe hip-hop is dead. By the time I got over my New Year's Eve hangover, "Hip Hop is Dead," the title track to Nas' December release had already dropped from 41 to 78 on the Billboard Hot 100. By the time you read this, it may have dropped all the way off of the charts. A few weeks ago there was more buzz surrounding the potential controversy that Nas would generate in his presumed dismissal of Southern rap, the ensuing backlash from emerging stars like Young Jeezy, and around the release of It's No Secret, the salacious memoir of supergroupie Carmen Bryan, Nas' baby mama, than there was about the muse-sick in the message of Hip Hop is Dead.

But the song and the album are still thriving on the iPods and in the car stereos of hip-hop devotees, and still in heavy rotation on MTV and MTV2, which along with downloads and ringtone sales, as Nas himself acknowledges, is just as, if not more important than chart position. "Hip Hop is Dead," is a manifesto in the tradition of Run-DMC's "Rock Box," Ice Cube's "Endangered Species (Tales From the Dark Side)," and Goodie Mob's "Cell Therapy." Putting out a single like this is planting a flag on the moon, staking a claim to a corner of the rap universe and to position one's legacy within the rap canon.

Nas is of the rare breed that's had wide commercial success but still maintained credibility with the orthodox rap faithful. If Jay-Z inherited the populist mantle of Biggie Smalls, then Nas inherited the mythological stature of Rakim. So when Nas earnestly posits, "roll to every station, wreck the DJ," hip-hop America takes notice. But it would be a misinterpretation for Nas' fans or peers to take "Hip Hop is Dead" as an across-the-board denouncement of present-day hip-hop, because it's much more complicated than that. It only makes sense that Nas would declare an end to his own golden era of hip-hop in which lyricists ruled and " ... when it wasn't all business." He's paid enough dues to speak for a particular point of view about the changing state of affairs in the hip-hop nation that surrounds him.

You hardly even hear the word "rap" anymore to describe a genre of music. And the title "MC" is out of circulation as a real rank, now an old-fashioned honorary title like "Sir" or "Dame." "Hip-hop" is now a musical form that encompasses all kinds of vocal and instrumental styles and often lyrics that aren't really words. The game has changed, and Nas is wise enough to acknowledge it. But if you pay close attention, you can see that his message is that change is inevitable and that adaptation to that change is essential. It's not an accident that "Hip Hop is Dead" was produced by Will.I.Am, one of the architects of the deconstruction of rap from neo-classical urban poetry to crossover party music.

Some will interpret the song as a slap in the face to the current generation of hip-hop -- a continuation of the reaction of the New York school to the ascendancy of beat and hook driven Southern and Midwestern hip-hop. But instead of regarding it in a negative light, it should be seen in a larger context of hip-hop's changing status in the culture at large. If anything, Nas isn't chastising those who've morphed rap into Southernplayalisticadillacmuzik, but rather those who would be his own protégés -- whom he sees as not putting in the work, or not paying homage to the tradition that their craft is built upon. When he quotes, "Oh, I think they like me/In my white tee," it doesn't really feel like he's chastising the youth movement as much as he's acknowledging what he hears echoing back to him, and is encouraging the new generation to dig deeper than "chain hang low" or "lean wit' it."

More than most, Nas recognizes that what was once seen as a momentary inner-city phenomenon and a diversion from established black music has emerged from the 1990s as the primary popular musical form of Generations Y and Z, and has expanded beyond its early '80s forms of music and dance to a full-fledged culture with its own politics, style of dress, books, films, and personalities. Over the years, Nas' most memorable tracks are those that have raised consciousness without preaching. "I Know I Can," "If I Ruled the World," "One Love," and "One Mic" all, in a way, carried the same themes that "Hip Hop is Dead" carries now. What these songs have in common is a sense of history and a sense that hip-hop is the medium through which the message of the post-civil rights generation communicated with the world. Though there is some truth to Nas' metaphorical assertion that "Hip-Hop just died this morning," it's also true that it is effectively being reborn at the same time.