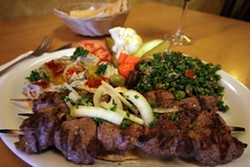 A falafel sandwich is a common street food found throughout the Middle East. When I lived in Egypt, it was as common to see falafel stands on street corners as it is to see hot dog stands in downtown Charlotte. The only difference was the stand consisted of a boiling hot caldron of hot oil with small balls of ground dried beans (in Egypt mostly fava beans, chickpeas in other countries) bopping in the oil. You needed to watch carefully as the street vendor scooped out the falafels to ensure that a stray insect had not fallen into the pot and then made its way onto your sandwich.

Falafels are both a unifying Pan-Middle Eastern cuisine element and a derisive one as well; similar to the arguments here contrasting New York style pizza to Chicago, or Carolina barbecue to Memphis. But throughout the Middle East, most acknowledge that the Palestinians hold the honor of the original falafel recipe: spicy ground chickpea/fava bean fritters, bathed in a thin tahina sauce, dotted with the ubiquitous pickled turnip (turned pink when pickled with beets) and then wrapped in warm khobz (pita). Two points here: yes, the Egyptians probably came up with the fava-bean-only rendition first, and, yes, the Israelis appropriated the falafel from the Palestinians to become an Israeli national dish.

Falafels have been popular with U.S. vegetarians for decades for the same reason they became popular in the Middle East: they are an inexpensive readily accessible food rich in legume protein. Unfortunately, falafels are one of the only foods associated with the Middle East, which is something akin to ascribing the hamburger as the only American dish.

In Charlotte, Middle Eastern restaurants have a scanty history. The Kabob Grill opened in Dilworth about eight years ago and changed hands three times. The original owner was Moroccan, the second owners Jordanian and Lebanese. But the current owners are Omar and Nabeel Kweider, who have worked hard to find a rhythm to make this small, 36-seat spot into a frequently visited spot by Charlotte Medical Center employees and the Dilworth neighborhood. Omar acknowledges he's "not a big fan of the name," but it came with an established business.

The Kweiders are ethnic Palestinians who were born and raised in Kuwait. The Kweider family arrived in the United States in 1988 and had been in the jewelry business. Their mother, a Syrian from Damascus, is the source of the recipes used in Kabob Grill's kitchen.

On Kabob's precisely edited menu are the typical dishes of non-specific Middle Eastern origins: hummus, baba ghanouj, kibbeh, stuffed grape leaves, fattoush, kebabs and baklava. But the Kweiders use the term "Mediterranean Cuisine" rather than Middle Eastern to describe their cuisine for obvious reasons: Charlotteans have never embraced Middle Eastern cuisine. Sure, sporadic bursts have occurred, and at one point two bakeries operated producing freshly baked, delightfully flavored pita, a bread which suffers extraordinarily in taste as it ages. But we have all watched establishments -- Egyptian, Lebanese, Persian, Turkish -- close to regroup, some never to reopen.

For this reason, the Kabob Grill chose a broader base of appeal. After all, restaurants that last are forged on pride, passion and practicality. Kabob's strong menu is devoid of unheralded treats hiding amid the usual suspects. The crispy, perfectly spiced falafels, easily the best in Charlotte, are a chickpea and fava mix. Is the meat halal (following the Islam dietary guide)? Kweider said that many in the Islamic community ask him this and then he points out that not only is his meat not halal, but he serves wine and beer (forbidden in Islam) and has a belly dancer on Friday nights (from 6:30 p.m. until 9:30 p.m.).

Kabob Grill's small room never seems cramped since everyone moves from one task to another with smooth assurance. The appetizer dishes are served in large portions, not in small mezza sizes. Since the tables are small -- many two tops -- a space challenge arises if your table wants to order several appetizers.

The rich and delicious meat and spinach (fatayer) pies, called empanadas here, arrive and are quickly consumed. The tabbouleh suffers from the same condition the cucumber tomato salad: lackluster tomatoes.

The entrées represent the real value and are the stars of this spot. Unexpectedly tender lamb tenderloin kebabs are a steal at $10 with two sides. The spicy sharwarma is plentifully dotted on its nest of swirled hummus while the old standby, the kafta kebab, is a nicely seasoned juicy grilled patty, even though it's beef, not lamb.

The wine list offers a few bottles ("We tried Lebanese wines but no one bought it," says Omar) and has some by the glass. Beer is available, too. Desserts can hold their own, too, especially the baklava.

The partners are talking expansion, not locally, but to add needed space to the restaurant. Will the added space allow the Kweiders to deviate from the pita driven, fast food norm? Will the menu expand to encompass some of the exquisite dishes of Damascus, practically guaranteeing something new to taste each visit? Or will the Kabob Grill stay true to its encompassing "Mediterranean" concept and not venture into depths of a specific Middle Eastern cuisine? Others who have ventured down that last path did not last in Charlotte. Have times changed?

Have a restaurant tip, compliment, complaint? Do you know of a restaurant that has opened, closed, or should be reviewed? Does your restaurant or shop have news, menu changes, new additions to staff or building, upcoming cuisine or wine events? Note: We need events at least 12 days in advance. Fax information to Eaters' Digest: 704-944-3605, or leave voice mail: 704-522-8334, ext. 136.