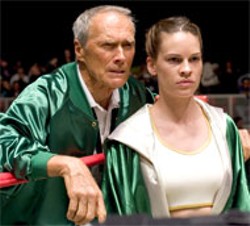 Boxing movies are rarely about boxing. Raging Bull, arguably the most celebrated of all pugilist pics, remains a searing character study about a violent man who was scarcely able to control the inner demons that ended up running — and ruining — his life. The still relevant drama The Harder They Fall, featuring Humphrey Bogart's final performance, explores the behind-the-scenes corruption that allows managers to place their trusting charges in dangerous situations with the same lack of conscience as, say, a US President sending young soldiers to their deaths in a needless war. The excellent Muhammad Ali documentary When We Were Kings is about one black American's spiritual awakening in Africa as much as it's about his triumph in the ring. Even the ludicrous Rocky IV, long acknowledged as the movie poster child for the Reagan era, isn't about two fighters circling on the canvas as much as it's about good ol' American integrity kicking the ass of soulless Soviet efficiency one final time before the end of the Cold War.

It would also be awfully hard to label Clint Eastwood's Million Dollar Baby (**** out of four) a boxing flick and leave it at that. Eastwood himself has said as much: "What interested me about Million Dollar Baby is the fact that it isn't really a boxing story. It's a love story about a person who is distressed about his nonexistent relationship with his daughter, and who then finds a sort of surrogate daughter in this young girl who is dying to make her mark on the world as a boxer."

Yet Clint's curt description fails to hint at the complexity of his film. Million Dollar Baby goes far beyond plot: It's a movie about feelings, about ambitions, about figuring out what's important in one's own life and then never taking your eye off the ball. It's a movie about three people and how their lives influence and enhance each other's. It's about redemption and second chances, about locating the morality in an increasingly gray world and applying it to problems that hold no promise of an easy way out. It's also the best movie of 2004, edging out Sideways by a half-whisker.

I initially saw Million Dollar Baby during the first week of December, even before it opened in limited release in New York and Los Angeles to qualify for the Oscars. Since then, rarely has a day gone by when it's been far from my mind, and a second viewing about a month ago only reinforced my opinion that the picture is an instant classic, much like Eastwood's Unforgiven. But the difference is that Million Dollar Baby doesn't deconstruct genre conventions like his revisionist Western, which turned them inside out to expose the inherent contradictions and compromises. This movie instead leaves many of the cliches intact, deriving its power not by upending them but by burrowing so deeply into them, it feels as if we're witnessing familiar sights for the very first time.

Certainly, the first hour of the movie covers well-worn territory. Frankie Dunn (Eastwood) runs The Hit Pit, a boxing gym located in downtown Los Angeles, with the help of his only friend, Scrap (Unforgiven co-star Morgan Freeman). Scrap serves as the facility's caretaker, yet in his day he was a plucky fighter with a lot of promise, a quality he instantly spots in the young girl who wanders into the gym intent on becoming a champion boxer. Her name is Maggie Fitzgerald (Hilary Swank), and, as Scrap notes at one point during the film's effective voice-over narration, "Maggie grew up knowing one thing: She was trash."

Having made a break from her trailer-park family back in Missouri, Maggie throws herself into her training, hoping that Frankie, known to occasionally mentor fighters, will recognize her potential and agree to guide her. But Frankie is a man grown hard by life's disappointments. He writes weekly letters to his estranged daughter — letters that always return unopened — and he loses his most promising boxer to a rival trainer because he's hesitant to place the young man in a grueling championship bout. So when Maggie approaches him, he quickly cuts her off, telling her he doesn't train girls and that she's too old anyway. But Maggie perseveres, and, well, would it surprise anyone to learn that Frankie eventually agrees to be her teacher?

Up until this point, Million Dollar Baby contains all the familiar trappings of crowd-pleasers like Rocky and The Karate Kid. Yet what makes this portion of the film soar is the attention to character that's provided by Eastwood (as director) and scripter Paul Haggis (adapting short stories from F.X. Toole's critically acclaimed book Rope Burns). The back-and-forth banter between Frankie and Scrap is wonderful; here are two men who have been together for so long, they instinctively know how to push the other's buttons when a comeuppance is in order. Yet beneath the ribbing rests a mutual respect that has helped both men weather the tough times together. The two actors work so well in tandem that, were Eastwood not several years older than Freeman, we'd swear that the pair shared a crib during infancy and have been inseparable ever since.

Haggis and Eastwood are careful not to shortchange the character of Maggie; on the contrary, she becomes the heart and soul of the film. In a world where many are too happy or lazy to wallow in mediocrity rather than make something of themselves, Hilary Swank's Maggie Fitzgerald is a genuine inspiration. Her decision to better herself leads to some of the movie's most heart wrenching scenes — "I got nobody but you, Frankie," she tearfully declares after realizing that she has completely outgrown a worthless redneck family that mocks her at every turn — yet it also provides the picture with an additional emotional kick.

Swank's work here is even more impressive than her Oscar-winning turn in Boys Don't Cry, and while Freeman has been consistently dependable over the past two decades, this marks a career-best performance for Eastwood, capping a remarkable career that has seen him mature as a filmmaker on both sides of the camera.

You won't read anything here about the second half of the film, after it turns on a dime and heads off in an unexpected direction. In fact, the critical community as a whole has done an exemplary job of remaining mum about the plot developments; perhaps not since The Crying Game has there been a movie whose late-inning surprises have been so diligently guarded. (A friend dying to see the film even wisecracked, "What, does Hilary Swank turn out to have a penis?") Yet it's interesting to note that the sudden change in course really isn't that unusual; it just seems uncommon because we rarely see American movies taking these kinds of risks, willing to shake up audiences not used to being confronted with messy issues of faith and morality. Were Million Dollar Baby an import from France or the Middle East, its conclusion would seem perfectly logical and par for the course; produced stateside, it feels almost revelatory.

Because Million Dollar Baby isn't a splashy spectacle like The Aviator or Troy — the sorts of movies that thrive as much on technical achievements as anything else — it's easy to undervalue the contributions of Eastwood's crew. Yet they provide form and content to the picture as efficiently as any of the actors. It's especially worth singling out the efforts of the great production designer Henry Bumstead, the two-time Oscar winner (To Kill a Mockingbird and The Sting) who's old enough to make even the 74-year-old Eastwood come across as a Malibu lifeguard (Bumstead turns 90 this March). The Hit Pit, the ramshackle joint owned by Frankie, isn't an actual gym; instead, it was designed by Bumstead and built from scratch within an abandoned warehouse. More than just a setting, the Pit functions as a fourth protagonist, offering solace to its owner and caretaker and hope to its customers. Tom Stern's cinematography breaks on the dark side, casting long, looming shadows that would have felt right at home in a vintage noir, while editor Joel Cox's cuts pick up for the fight sequences but settle down when meaningful conversations are front and center.

As for the effective score, it was composed by Eastwood himself. The man's appreciation for music (especially jazz) has been well documented, so it's no surprise that he's finally electing to score his own films (his first solo credit appeared on Mystic River). And as with his direction and his acting, the music is lean and sparse, carrying the movie along without any unnecessary flourishes. Indeed, there's very little about Million Dollar Baby that feels extraneous — this is tight, taut storytelling, helmed by a man still able to teach Hollywood's young punks a thing or two.