Moderate McCrory or Tea Party Pat: Which will show up in 2012? 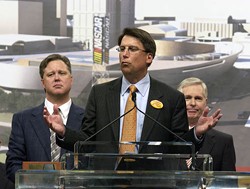 Charlotteans are used to seeing Pat McCrory run for office, but they may not recognize him in the next election. According to observers from both parties, the former Charlotte mayor has moved farther and farther to the right in order to shore up support from the GOP's ultra-conservative Tea Party factions, as he looks toward a rematch with Gov. Bev Perdue in 2012. Whether N.C.'s ultra-right voters will be convinced of McCrory's staunch conservatism and sincerity remains to be seen. Questions also remain about how moderate independents who voted for him in his mayoral races will react to a new, more rightward-marching McCrory.

He hasn't officially announced that he's running for governor again, but the truth is that McCrory hasn't stopped running since his close 2008 loss to Perdue. During the 2010 elections, he built support for a second gubernatorial race by traveling across the state, campaigning on behalf of GOP legislative candidates. These days, he regularly speaks to a variety of friendly groups, keeping his name in the news while promoting the state GOP's budget-slashing state legislature. There's also the little matter of the $1 million McCrory raised in the last six months for a "possible" 2012 gubernatorial race — just $200,000 less than was raised by Perdue. Yep, he's running.

We spoke to a couple of Republican behind-the-scenes political organizers who wished to remain anonymous, who say they haven't heard of any candidates on McCrory's right stepping up to challenge him for the GOP gubernatorial nomination. Dean Debnam, president of Public Policy Polling — which in July showed McCrory ahead of Perdue in a potential rematch, 45 percent to 39 percent — doesn't see any real opponents in the GOP primary for McCrory, either. He told the media recently that "McCrory is already looking like the de facto nominee and can effectively spend almost the next two years raising money and his profile while Perdue governs."

During his 14 years as Charlotte's mayor, McCrory was pegged as a moderate Republican by most voters and as a RINO (Republican In Name Only) by conservative critics. He championed light rail; the U.S. Whitewater Center; transportation and land-use planning; tree ordinances; sidewalk policies; the Uptown arena; and other projects that routinely angered conservatives. These days, however, McCrory's emphasis has been more on issues dear to the state GOP, such as spending cuts and the Voter ID bill, while embracing the sweeping changes made by the GOP-led General Assembly.

McCrory denies that he's moving rightward, or that he's positioning himself a certain way for a gubernatorial rematch. "I don't see that I've done that [moved to the right]," said McCrory. "I support the same things I supported as mayor. I still emphasize infrastructure and education and moving forward, whether it's Charlotte or the whole state of North Carolina. You know, I speak out about the things I believe in and support, without giving thought to who it's going to please or not please. That's how I've always done things."

Nonetheless, the right wing of his party seems to have real problems with McCrory. No one knows whether he could actually move enough to the right to lasso support from hard-line conservatives. If former Charlotte City Councilman, and longtime local conservative leader, Don Reid had his way, someone would challenge McCrory from the right in the primary.

"I wish there were somebody," said Reid, "I think they'd have a good chance." Reid pulls no punches when it comes to McCrory's reign as Charlotte mayor.

"McCrory did more to damage the Republican brand than any politician that's ever been in Charlotte," said Reid. "He joined the Uptown crowd and did their bidding. When he took over as mayor, he had a Republican majority, and he drove that right down the drain. ... During his terms in office, the Uptown business interests took control, and Pat McCrory was their main helper. Everything had to be downtown; heck, they'd move the Whitewater Center downtown if they could shift the river."

From the other side of the political divide, N.C. Democratic Party chair David Parker says McCrory has moved too far right. "Just think of his advocacy for light rail and mass transit while he was mayor, and then he stood silent when the N.C. legislature tried to send transportation money back to D.C. Unfortunately, this is typical of most Republican candidates now — they are so infatuated with the low-hanging fruit of the Koch brothers and Art Pope's money that they simply can't resist it. The serpent sidles up to them in the Garden of Eden and they bite the apple every time."

Ah yes, the Koch brothers and Art Pope. These days, you can't get around them. You certainly can't discuss the GOP's new majorities in several state legislatures without including them. To critics like Parker, it seems obvious that McCrory found out who is running the N.C. GOP these days, and jumped on their bandwagon. As is the case in many other states, the GOP in North Carolina is being reconfigured by an influx of money and advice from groups with ties to billionaire industrialist brothers David and Charles Koch (pronounced Coke). They control various foundations and have contributed to an array of conservative and libertarian causes for at least 30 years. The Kochs' most prominent, influential group is Americans For Prosperity (AFP), which progressives jokingly call "Americans For the Prosperous" because of its strong pro-business, anti-union activities. Since President Obama's election, AFP and other Koch-funded groups have grown rapidly. They helped organize the 2009 Tax Day Tea Party protests; financed conservative anti-health-reform events and other Tea Party organizations; and led the charge in Wisconsin where the GOP-led government launched sweeping moves to get rid of public employee unions. They held seminars for supportive state governors in which they developed plans for coordinated lawmaking strategies in those states, resulting in many GOP-run state legislatures pushing strikingly similar agendas in 2011. The AFP North Carolina chapter's 2011 legislative agenda, to give just one example, is very close to the final list of what the N.C. General Assembly actually passed.

In North Carolina, the main link to AFP is millionaire Art Pope, a Raleigh retail magnate who is on the group's national board of directors, and whose family foundation is AFP's second-largest contributor. Pope's foundation also provides around 90 percent of the income for think tanks and policy groups such as the Civitas Institute and the John Locke Foundation, which promote a libertarian/conservative agenda in the state. Art Pope's organizations and family members also poured $2.2 million into 22 N.C. races, making the GOP's 2010 takeover of the legislature that much easier.

Which brings us back to claims that McCrory has veered to the right. He linked up with the Pope nexus during his 2008 gubernatorial run, and then, after losing to Perdue, expanded the relationship. During the long, bitter health care reform fight in 2009, McCrory was a featured speaker during AFP-sponsored "Hands Off My Health Care" events. Since then, he has participated in various AFP efforts, including sending out e-mails and recording robo-calls — first, in favor of AFP's unsuccessful attempt to override Perdue's veto of a challenge to the federal health care reform law, and, most recently, pumping up support for an override of Perdue's veto of the Voter ID bill. In one such message, which some saw as an example of race-baiting, McCrory used white conservatives' top racial boogeyman, the voter rights' group ACORN, to scare conservatives into action: "Hundreds of ACORN-type organizers are descending on our state in an attempt to influence the election." Greensboro News & Record editorial writer Doug Clark called the pitch "political trash talk" that was beneath McCrory's 2008 campaign standards.

Former Councilman Reid said, "Pat is slick — he's slick enough to know that when Republicans took over the state legislature in 2010, it was because of a strong conservative showing in the election. He's tapping into that now, and all of a sudden he's trying to be the darling of the conservatives. It's a very pragmatic move. Pat is [doing] whatever it takes to get to be governor of North Carolina."

McCrory says that if he has linked up with Americans For Prosperity, "it's because I agree with them, particularly on three issues: taxes, education and energy exploration. There are areas where we just agree to disagree, but that doesn't mean I won't support most of what they're about. You know, about this notion that I'm positioning myself a certain way, I don't calculate based on opponents' — or potential opponents' — positions. I just don't do things that way; I don't worry about the other candidates. I only can control what I do, and I'm out there supporting the positions I believe in, not to please one group or another."

All in all, McCrory has done much that should appease some of his party's most rightward elements, while also relying on supporters of his more progressive mayoral initiatives to stick with him. If he wins in 2012, it will be the result of keeping that odd coalition together. In today's rancorous political climate, with little tolerance on either side for other viewpoints, it's going to be interesting to see if McCrory can pull it off.