More than a Mofro

JJ Grey puts himself out there on new album 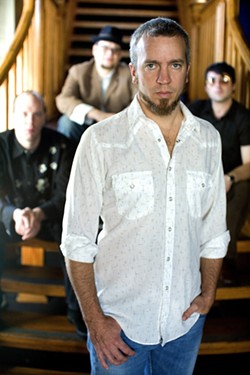 The music emanating from JJ Grey & Mofro is nowhere near being categorized as some kind of "retro" rock, but there's still something oddly familiar about it. It infuses elements of funk, rock, blues into a laid-back Southern stew.

While the band has changed lineups many times, Grey has always been at the helm for songwriting, singing, production, arranging and just about anything else. Well, at least he no longer worries about managing, booking and promotion.

"I've been playing under the name Mofro for a long time -- since 1998," Grey says by phone from a tour stop in Auburn, Ala. "They gave me all the time in the world to do that stuff while I was working at the lumberyard, to leave and go play shows and come back and still have a job."

Eventually, Grey, who's been performing for 20 years, hit a point where he had to decide to do one or the other full time. He was always ready for music to be his career, but, in the beginning, it wasn't financially possible.

Now, things are going strong and he's out touring in support of his latest album, Country Ghetto. While the band's sound remains the same thanks to Grey's continued duties of songwriting and arranging, it's the first time he's put his name in front of the band's. They were simply called Mofro until the proverbial straw that broke the camel's back.

"I was sort of shamed into it," Grey says. "One of the songs is about one of my best friends I grew up with dying on Oxycontin. Another song is about the last conversation my grandparents had before my grandfather died. To have a family member come up and say, 'Are you ashamed? Why do you hide behind -- other people write their own tunes and they go by their own name.' I wanted to hide out.

"I opened up for Galactic one time by myself, acoustic, and a fan came up and said, 'I really dug it, but you played Mofro songs and I was hoping you'd play some of your stuff.' Mofro is just a couple of letters. Those songs are about real people, not made-up stuff. That helped me to make a decision, too."

Grey says the changes in lineup over the years haven't had too much of an impact on the music as he looks for people who create the tunes he's searching for. He says it's easier to have them play the way he wants instead of having to dictate to them the sound he's aiming to create. As long as he's in control, he'll stay happy.

"The songs are the stories of my life, so to speak," Grey says. "They're personal. They're not a group of buddies that get together, drink beer and write songs about universal topics. Then, after they split up after 10 years, they write songs that are personal and tell their individual stories. This has been my individual story since day one. I just decided to call it Mofro instead of calling it by my name."

He looks at his songs as a kind of therapy where he's preaching to himself. He said he reached a point in his life where he could have drifted along, but instead decided to anchor himself. He writes songs as reminders to himself. "The song 'War' is about me trying to deal with my own internal war," he says. "I don't set out to do it, but, deep down, I know I'm preaching to me."

Grey says he's about three-quarters of the way done with his next album and hopes to have it done this year. In the past, he's had years between albums, but now that he's signed on with Alligator Records, it seems that things are falling into place a little easier.

"Alligator is hungry," he says. "They still try to sell records the old-fashioned way. I kinda dig that. [In the past], we were touring to stay alive. It wasn't because the material wasn't there [for a new album] or we weren't ready. We were always ready."

Grey does a lot of things his own way, which should come as no surprise given the artwork on last year's album. The cover is a take on the "Don't Tread on Me" flag with those words written simply on the inside cover.

"It's my favorite flag ever made," he says. "It doesn't tell anybody that what they do is wrong or right, it just says, 'Don't Tread on Me.' It's one of the first flags of the United States. The way the snake sort of is -- they try to stay out of people's way, but occasionally things go bad. Most of the time, people get bit when they're trying to kill the snake or mess with it. [The original settlers] came over to a new place and made a flag that personified a whole group of people who were fed up and not taking any shit anymore. We're not telling anyone how to live, we're just saying, 'Don't Tread on me.'

"I can definitely relate to it," Grey adds. "Country people, Southern country folks especially, are the butt of a lot of cross-sighted jokes. I got a sense of humor, but at the end of the day they don't have a voice because they choose not to say, 'We're not all stupid.' They don't care. It goes back to that snake. I don't care what you say or what you do on the TV, radio and all that shit. Just don't tread on us."

JJ Grey and Mofro will play the Neighborhood Theatre on Feb. 9 with Garage Deluxe. Tickets are $15. Doors open at 8 p.m.