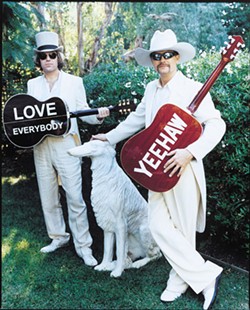 Newly arrived in the Queen City, I shall attempt to bring a fresh approach to the vibes from around the way, as well as to make sense of my own grits-fueled progress as a jumped-up Gotham transplant shifting gears to easy ride into the many-fold splendors of Charlotte's local culture. As with all alternative weeklies of any repute, the renewed mission of Creative Loafing shall be to reach out and touch all the diverse facets of folk inhabiting this fair region. Even eccentric, boot-scootin,' country soul-lovin' Afrikan gals like me.

Color me glad to be back in my beloved Southeast, the land of my fathers since way, way back in the day of the Triangular Trade. Downright giddy to be in a place where one can drink some sweet tea and consume buttery Krispy Kreme donuts -- or perhaps even nibble the rarefied delicacies of Dean & Deluca, so familiar to me from the glam ghetto of Soho. Having toiled so long upSouth, I reckon I deserve a break -- and some obliging pit pork -- during these dog-end summer days.

I hope y'all will roll with us, bear witness, and testify, as the Vibes section undergoes some changes in the coming months. We are truly committed to keepin' you truckin' through the region's frenetically expanding sound and vision-scape, replete with diverse musicians -- from nationally renowned Jamadelic vets Widespread Panic to homeboy soul provider Anthony Hamilton; regional heavy-rockers-on-the-rise Southern Bitch to such local Latin rockers as La Rúa -- clamoring for your hearts and ears. We'll explore all of the area's sounds -- particularly the sonic blends that keep your ride Crunktastic and the ever-flourishing current wave of Southern rock. Drop us a line to turn us on to new bands and underground movements that stir you up. And if you just want to send potentially incriminating candid snaps from your recent run to the 10th anniversary Redneck Games down in Georgia, those are welcome, too.

By the by, please don't take my Southern references as mere carpetbagging; Yankee prurience deployed on a whim to mesh with the a-go-go wave of hillbilly chic being lucratively mined by the likes of Country Music Television. Let me drag out my Dixie bona fides: With all my kin people hailing from western Virginia, south of the Rapahannock River, and southwest Georgia, this bitch has keen ears for Southland sounds, from boogie to bluegrass. I done done my time at the late, lamented Winn-Dixie. (Where will I get my delectable yellow sheet cake now!?) Still, I can't help but dig the typical Southern imagery of Hot Apple Pie's "Hillbillies" tune and tongue-in-chaw video that's in such heavy rotation on CMT these days.

One of the most alluring things about Creative Loafing's call for me to get on down here was my anti-Deliverance daydream of acquiring a Tracker pontoon boat upon which to model Bass Pro fly gear and keep a never-ending party afloat at Lake Norman. (The soundtrack for this party, of course, will be the full-tilt twang 'n' funk of Big & Rich, who play at Verizon Wireless Amphitheatre on Friday.) You could probably pull off this behavior in the Hudson River's filthy waters, but it just wouldn't have the same flavor and sense of fun. And you couldn't rock out to Allman Brothers bootlegs and Skynyrd's Muscle Shoals album in anticipation of those bands' October 2 concert summit, also at Verizon, without the diehard New York urban PC police raising an eyebrow.

Some other shows on the horizon that I'd take in if I could clone myself: Joe Ely at the Visulite Theatre and Percy Sledge at the Oasis Shrine Temple, both on Friday, and the great local bard David Childers at Comet Grill on Saturday; Nashville Pussy on Sept. 15 at the Visulite, David Ryan Harris the next night at the Neighborhood Theatre and Shooter Jennings at Amos Southend on Sept. 17 (while some of y'all will be giving love to my velvet-voiced Georgia Peach homegurl Lizz Wright at the Blumenthal); the titanic Mexican band Jaguares at Tremont Music Hall on October 1 and Arlo Guthrie at the Neighborhood on October 3. Yes, that's the Arlo Guthrie of "Comin' into Los Angeleez, bringin' in a coupla keys..." fame. A lil' Woodstock Nation fairy dust wouldn't hurt you choppin'-and-screwin' Young Turks none, I declare. And those dope-smugglin' lyrics put ole Arlo right up there with Fiddy and 'nem. (Await our cover story on the burgeoning new genre of Centrum Silver Crunk... Um-hmm.) See, boys and girls, it is possible to get out 'n about, get wrecked and get your groove on in Char-town on sequential nights!

In flight from Manhattan's urban dystopia (which is further burdened by Homeland Security these days), one thing I definitely don't intend to give up is the 24-hour nightlife swirl of gaiety. (So, my dear Latinos: ¿Adónde sigue la fiesta?) It's been a long, strange trip for me, between the opposite poles of Bobodiolasso, the steamy, dusty West African metropolis of my youth, and the tony, leafy hamlet of Ballantyne. But it's all good. Looking to y'all (and the greatly esteemed Southern hospitality) to see me through on this new adventure in the Dirty Dirty. So if you spot me out humping it on the CATS (like myriad longtime New Yawkers, I don't drive -- yet), or reveling at rooms from the Excelsior Club to the Evening Muse, do holler. And lend a hand: Sis can barely tell the difference between South Park and Centennial Park. Also: Please hip me to which joint has the best jukebox full of vintage Malaco sides.

Come now, let us hear from the Amen Corner (via digital drum commentary and the ole reliable grapevine), and enjoy a non-stop peek beneath the mysterious and rebellious veil of the Dirty South. Just like Big & Rich, our aim is to provide pleasure and "Music Without Prejudice." Help us reach that mountaintop together, Brothers and Sisters.

Y'all c'mon back now, ya hear?

New Vibes editor Kandia Crazy Horse is the author of Rip It Up: The Black Experience in Rock & Roll (Palgrave/St. Martin's).