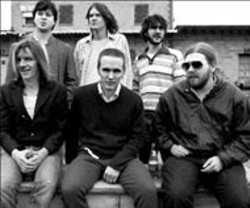 Aqualads -- For some reason, while terrific, Christmas day always screams for a little unwinding by the time nightfall comes. And what better way to shake off the cold weather -- and the fact that you got a bunch of damn socks instead of that new Pavement reissue you wanted -- than to listen to some of the warmest tones Charlotte music has to offer, courtesy of the Aqualads? Twangy Christmas, everybody. Double Door Inn (Davis)

THURSDAY 12.26
Justincase -- Charlotte's favorite major-label siblings return for a big 'ol hometown show at Amos' tonight, and will be featuring songs off their new album, Justincase. The young'uns Tosco, who, legend has it, were discovered by Michelle Branch, have played more shows in the past two or three months than in the year previous, which ought to bode well for their stage show. With like-minded popster Josh Lamkin. Amos' Southend (Davis)

Pyramid -- One of the true originals of Charlotte music: distorted loops and tape hiss and blips alongside strummed washes of guitar and caught-in-the-throat lyricism. Music like this -- the kind that seems like it hurts coming out of the performer -- somehow transforms midair for Pyramid, and by the time it hits the audience, tastes like sweet release. The band will be leaving soon after the show to play some songs at the Sundance Film Festival, as a couple of their songs are set to appear in the movie All The Real Girls. Jerry Chapman plays the early show. The Evening Muse (Davis)

Sister Hazel -- Sunny stuff, no doubt, and catchy, but there's just something missing here. I can't put my finger on it. How to say? It's not awful, like, say, most MTV cut-and-paste "alternative" acts, and the band does have a certain craftsman's polish. It feels halfway inspired, even if the inspiration is just a good old-fashioned barbecue with friends and a few cold cans of "pop." What's the word I'm looking for? Generic. Not offendingly generic, just generic. For many, it'll get the job done. It's just that others, like myself, prefer stronger medicine. Tremont Music Hall (Davis)

SATURDAY 12.28
Bellyfull -- The Rhythm of Creation is the recent joint by this Charlotte combo and it properly presents the band's agenda of jazzy forays into funky R&B via the Jam highway. The title track is a spacey exploration lurking in the solar system known as Jazz. The band puts forth mostly instrumental stuff but the songs with lyrical overlays aren't too shabby either. With Marsupial. Mojo Restaurant & Spirits (Shukla)

Snagglepuss / The Goldenrods / Maryz Eyez -- Fine eclectic bill here, with the kindhearted new-wave stomp of Hope Nicholls and Snagglepuss, the sleepy-eyed wizardry of Benji Hughes and the Goldenrods, and Michigan's Mary'z Eyez, a slyly sexual pepperpot punk band from Kalamazoo (forgive me -- the analogy well is running dry). The Steeple Lounge (Davis)

TUESDAY 12.31
Bessie Mae's Dream -- The J word is everywhere and mainstream newspapers are writing about Jam bands with a breathless sense of discovery. Let's see, original jam bands, i.e., jazz outfits, go back, what, seven or eight decades? All good music is essentially jam music. NC's Bessie Mae's Dream are pretty unrepentant in their quest for a Deadhead renaissance. To their credit, they manage to create original spacey jams while giving tasty swirls to covers of the Dead and others, keeping dullness to a minimum and head swaying to a maximum. Mojo Restaurant & Spirits (Shukla)