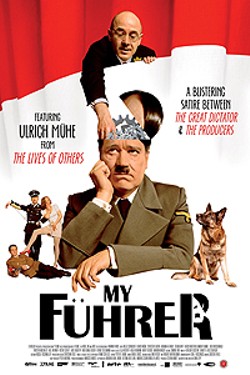 December 1944: the "total war" is as good as totally lost. Goebbels, however, isn't willing to be so easily defeated. On New Year's Day, the Führer is supposed to re-ignite the public's fighting spirit with an aggressive speech. The only problem is that the Führer can't do it. Sick and depressive, he is avoiding the public. The only person who can now help is his former acting teacher, Adolf Grünbaum--a Jew. Goebbels spirits him and his family out of the Sachsenhausen concentration camp and sets them up in the Reich Chancellery. Time is running out - the Führer has only five days to return to top form.

My Fuhrer (Mein Fuhrer - Die wirklich wahrste Wahrheit uber Adolf Hitler) is not showing in any theaters in the area.