My Sister's House joins the fight against homelessness in Charlotte 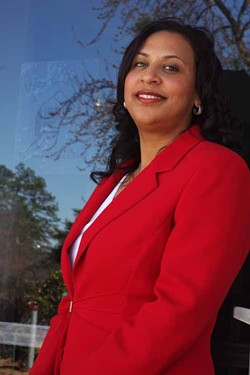 The fight against homelessness in Mecklenburg County has gained a new group of soldiers with the launch of My Sister's House on Beatties Ford Road. Two weeks ago, The Friendship Community Development Corporation opened the shelter, which houses women without dependent children.

"The way the shelter came about is three years ago, [the Rev. Clifford] Jones, the senior pastor at Friendship Missionary Baptist Church, made a commitment to this community to address homelessness in Charlotte-Mecklenburg," said Jennifer Coble, Friendship CDC executive director. "At that point in time, we began operating temporary shelters."

When the Salvation Army shelters would run out of beds, the church would take the overflow, she said. But the church decided that instead of just housing homeless people in the short term, there needed to be a larger effort to end the homeless crisis in the city.

According to A Way Home, an organization that provides a community response to homelessness, more than 5,000 people are homeless in Mecklenburg County on any given night and tens of thousands annually.

Currently, 17 women reside in My Sister's House with more women being brought into the facility, which can accommodate 26 permanently and 15 on a temporary basis. Coble said that My Sister's House not only gives the women who come on site a place to stay, but gives them a chance to build or rebuild their lives.

"When the women come on site, they are screened and assessed. We offer onsite GED programs, adult basic education programs and job readiness programs," she said. My Sister's House also works with community partners to place the women into job training once they have completed the education programs offered by the shelter.

"We also have a full-time person who assists the women in finding internships and ultimately permanent positions."

And though Coble said some of the women who come into My Sister's House need the education programs, there is a growing population of homeless women who have college educations but fell on hard times and found themselves without a home.

"It's interesting because the face of homelessness has changed, and it's not just the crackheads you're used to seeing. It's not just prostitutes, but it is folks that have fallen on hard times. We have a mother and [an adult] daughter that we're trying to work with. Both of them lost their jobs and subsequently lost their apartment. These are regular, everyday folk."