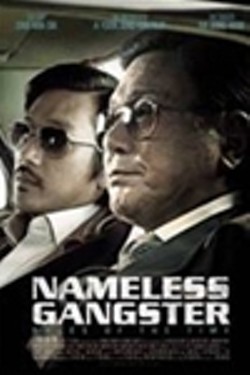 On the verge of being laid off, corrupt customs officer Choi Ik-hyun finds a methamphetamine shipment. His life turns around when he partners with the harbor city's biggest crime organization boss, Choi Hyung-bae to make money off it. They eventually find out they are distant relatives. Hyung-bae helps Ik-hyun set up a business with the money from drug trafficking while Ik-hyun lobbies for his partner Hyung-bae. With his unique wit and ability to make people like him, Ik-hyun borrows Hyung-bae's power to take over Busan. However, the partnership turns sour over delings with a rival organization. Soon after, the government declares war on crime and Ik-hyeon decides to take the opportunity to set up his partner and escape the tightening grip of the law enforcement.

Nameless Gangster (Bumchoiwaui junjaeng) is not showing in any theaters in the area.