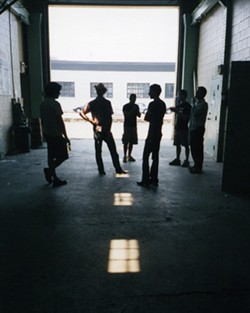 You've heard the news, right? Instrumental rock is dead. Hopelessly derivative or just aggressively dull, today's instrumental rock — you may know it by its flabby "post-rock" moniker — is suitable only for clichéd emotion-making in movies and selling hipsters shit on TV.

At least that's what the naysayers and I-remember-when-ers would have you believe. There's a key flaw in the theory, though. Groups like Toronto's Do Make Say Think keep creating really great instrumental rock records that are as inventive as they are fun.

Take the decade-old band's latest release, the sublime You, You're a History in Rust, which came out in February to nearly universal acclaim. Building on the more organic feel of 2003's Winter Hymn Country Hymn Secret Hymn, the collective's fifth record incorporates more acoustic elements and expands the band's already impressive sonic palette. Two of the eight cuts even feature actual words.

"We've been an instrumental band for 10 years, so one way to be adventurous is to have lyrics," laughs bassist/horn player Charles Spearin, one of the band's founding members.

Some might take the presence of lyrics -- sung by the band and co-written by guest vocalists Alex Lukashevsky and the Great Lake Swimmers' Tony Dekker -- as proof of instrumental rock's creative dead end. Those that do, however, choose to ignore the array of emotions, rich textures and sheer invention in this band's music. Where some instrumental acts rely primarily on the tension of soft/loud contrasts, and others use repetition and groove to build trance-like audio bliss, DMST samples from such a huge pool of influences that its secret weapon is often surprise.

The band formed during what many consider the golden age of instrumental rock, when vastly different-sounding bands helped another generation of rock fans feel as though they'd rediscovered fire or the wheel. Between 1995-96, everyone from digital wizards Autechre and Oval, avant-chamber rockers Rachel's, dusky noirists Dirty Three, Krautrock-dubbers Tortoise and Mogwai's smolder-and-explode guitar army put out career-defining instrumental records.

DMST -- who got its start playing ambient noise in the chill-out rooms at Toronto raves -- lapped it all up, along with the usual free jazz suspects, classical minimalists, and the lengthier instrumental workouts of rockers like Yo La Tengo and Spiritualized.

The impressive thing about DMST is how they've absorbed it all and turned into something unique that sounds fresher with each release. Their early records were more reliant on dub and electronica, and their live shows back then more improvisational. But the music has evolved in different subtle directions, and done it so naturally that all those early elements still figure in the mix.

"It's good to get up there and play just for the sake of playing sometimes," says Spearin of their earlier free-form live gigs. "But then we did a lot of composing and playing and we now have things that have a certain emotional weight to them that we want to share and present to people."

You can hear that in some of the themes, which often appear like flickering shadows. Furtive patterns are plucked on acoustic guitars and augmented by gentle keyboard washes or strings until their shape is rendered loud and clear by electric guitars, horns and the band's two drummers. Other songs state their theme emphatically -- "The Universe!" rocks harder than anything Led Zeppelin ever recorded -- but leave plenty of room for exploratory nuance, with time signatures and tempos shifting at crucial junctures.

These approaches may not be new, but a sense of discovery permeates Rust. It's true that too often instrumental rock can sound like a dry academic exercise or rote formula, but DMST's reverberates with the palpable joy and excitement of exploration. For Spearin and his band mates, it's about delving into the emotional heart of the music to discover how and why it works.

"It's like really tasting your food, you don't just gobble it back, you figure out what all the different flavors are in it," says Spearin. "I guess you're trying to figure out what the hell music is and how it creates these emotions."

As they've done since their second record, the band retreated to the Ontario countryside to compose and record much of Rust in one family member's cottage and another's barn before final overdubs and mixing at their home studio, th'Schvitz. The ambience of the surroundings is palpable on record -- you can even hear fire crackling in the background of one song.

But the isolated surroundings also facilitate the creative process. Like fellow Toronto mega-collective Broken Social Scene -- where Spearin, Ohad Benchetrit and Julie Penner have been regular contributors -- DMST's line-up is often amorphous. There's a five-member core, but a much larger pool of contributors and, for their Charlotte appearance, eight members on stage.

"Working with other people develops a different part of your personality, which is a really healthy thing," Spearin says. "I think you become a better person when you learn to negotiate other people's thoughts and feelings and work it all together. We like the arguing and discussing and all that. We can go on for days, sometimes they're great, sometimes they're frustrating, but it's nice because it makes it more of a band project. No one person dictates their will. We all have to agree, so we really get into the reasons why we're making these decisions."

And in the end that collective consciousness best explains why DMST's instrumental music continues to invigorate and grow. The lost art of listening in a communal enterprise turns out to be the same skill so fundamental in creating interesting music.

"There's a sense of opening your ears again and listening to what's going to happen next," says Spearin. "Instrumental music does that if you're willing to go there."

With DMST leading the way, it's a post-rock journey well worth taking.