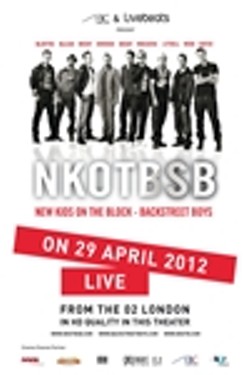 New Kids on the Block/Backstreet Boys: Live from O2 London

For once, all the rumours are actually true! New Kids On The Block have joined forces with Backstreet Boys to form NKOTBSB. NKOTBSB will exclusively be screened at select Showcase locations LIVE from the O2 Arena, London. All the classics and new songs will be performed including hits such as 'The Right Stuff', 'Step By Step', 'Everybody (Backstreet's Back)' and 'Quit Playing Games With My Heart'. NKOTBSB first surprised and delighted fans when they took the stage together for a medley at the sold out New Kids On The Block Radio City Music Hall show in June 2010. The two groups wowed audiences again in

their first joint televised performances at both the American Music Awards this past November and Dick Clark's New Year's Rockin' Eve 2010.

New Kids on the Block/Backstreet Boys: Live from O2 London is not showing in any theaters in the area.