New retail café in NoDa asks that you relax

SCORE one for sweets

After Jay Knox's son Cassius was born two years ago, the frenetic, travel-heavy life of the fashion industry lost some of its appeal for the new father. And, like many new parents, Knox thought about returning to his roots and slowing his pace.

Knox's roots are here in Charlotte, and he's not only reconnected to those roots but has been working on strengthening them with the upcoming grand opening of his new retail café, SCORE.

It's a retail shop where you can buy clothes, shoes and accessories. Most of the clothing items are designed and manufactured by the company, and Knox says all of the food and beverages are locally sourced.

But SCORE isn't only a place to shop. And it's not just a café, or even a sweets shop. Knox hopes it will soon be a destination spot where folks can hang out. In fact, he wants you to relax on the store's couch, grab a drink and a treat and chat with the staff about your fashion preferences or just about life in general.

"It's truly a lounge and café style," says Knox. "Our goal is to stay in the sweets category, but we will expand that all the time, though we will only work with local food and bakers," he added.

"We want people to come in and hang out," he says. "Whether they buy anything or not, we want to get people used to the concept of shopping and drinking and eating at the same time."

The retail café is a new concept for Charlotte, but it's not Knox's first; he began with a similar shop in Washington, D.C., that also includes a restaurant. And, if things work out the way he's hoping, the Charlotte store will soon expand, adding a restaurant here, as well.

The Charlotte shop recently celebrated it soft opening, and Knox plans for the grand opening to happen sometime in mid-January. Last week, friends and family were treated to a preview and a sampling of some of the sweets the store plans to carry.

The star of the soft opening were the cupcakes, made by Delisa's Delectables. While the mini-cupcakes were available for the taking at the soft opening, five dollars upgraded you to a cupcake with a liquor-filled pipette. The flavors on display were strawberry daiquiri, Jack & Coke and OJ & Cran, which includes a pipette of vodka. Liquor is also infused into the frosting.

I tried the Jack & Coke cupcake, squeezing the pipette of whiskey into the middle of the cake. On the first bite, your taste buds focus on the butter cream — not too sweet, too heavy or too thick. On the second bite, you get the infusion of liquor, and it's perfect — not overpowering, but rather a nice balance to the sweetness of the cupcake.

Sean Jackson was on hand for the soft opening, and he was all about the OJ & Cran mini-cupcakes. "That cranberry makes for a nice burst of flavor," he said of the sugared-berry decoration. Jackson says he's not usually a sweet person, "so the fact that I like this ... they did a good job." 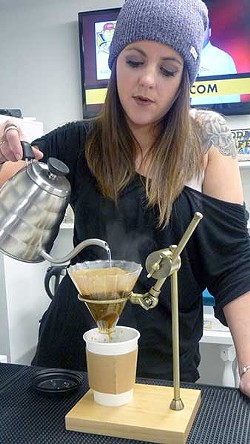 Barista Shannon Davidson, who makes pour-over coffees and teas at the sweet bar, enjoyed the pop-up kitchen on hand for the soft opening, which offered up Dutch pumpkin pancake puffs with Nutella cream, strawberries and macadamia nuts were shared with visitors. Delicious!

Knox says he hopes pop-up kitchens will also be a regular feature in the store.

It's important to him to support local vendors like pop-up chefs and suppliers. He says that, except for some brand-name shoes like Adidas, Nike and Vans, most items on display are locally sourced. And that includes the coffee beans, tea leaves and even Bar Chocolate's handcrafted, artisanal, small-batch confections. (Bar Chocolate also uses locally-sourced ingredients.)

Justin Scotto, SCORE's manager, says that once the store is officially open it will also carry "old school nostalgic candy by the pound."

Also coming with SCORE's grand opening: More liquor! Knox says that Thursdays through Saturday nights, booze and wine will be served in addition to coffee, tea and sweets. If you want beer, however, you'll have to walk next door to hit up Bodega, but you're welcome to walk your beer back to his couch. "You can come in with anything you want from Bodega," Knox says.

"We're thrilled to have them next door," says Lisa Moore, owner of Bodega, a deli and grocery store. She's also a fan of the liquor-infused cupcakes. "They're really tasty," she says.

Moore says that the building improvements being made by SCORE are encouraging her to want to "improve the building together."

Knox's plan is not only to expand into a restaurant — hopefully into the empty space between SCORE and Bodega — but to offer a patio for his customers and a separate entrance for the clothing store and the café.

"I want to stress this more than anything," Knox says, "If you want a quick cup of coffee go to our friends down the street, Smelly Cat, which we love. But if you want to come and hang out, and relax and talk with the staff, enjoy some free WiFi, and just chill and possibly browse for some clothes at the same time, SCORE is the spot where you can do that." 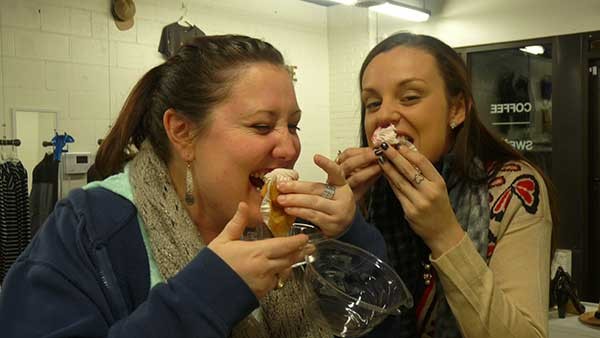 "Everything we do is going to be on a not-hurried, slow pace," he adds. "Everything we focus on is about enjoyment. We are trying to build the neighborhood. I'm from here and love the area, and we want to offer this for our neighbors."

He says he's looking forward to expanding his retail offerings, too, to women's handbags and shoes and more clothing for men and women. "But everything is going to be more casual as opposed to dress (wear)," Knox says.

In the new year, the café will be open every day of the week from 9 a.m. until 7 p.m. Alcohol will only be offered on Thursdays, Fridays and Saturdays, though liquor-infused cupcakes will be available daily.