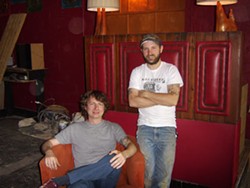 Charlotte's been crying out for an intimate rock 'n' roll venue ever since The Steeple and The Room closed their doors two years ago. Suiting its name, Snug Harbor appears to be in the right neighborhood to fill that vacancy.

The 142-capacity Snug Harbor opens in early May, pending ABC permits and final touch-ups. The venue/bar is located in the heart of Plaza-Midwood on Gordon Street, just a stone's throw -- more of an underhand toss, frankly -- from the old Steeple building.

"Scott (McCannell) and I have been working on putting something together for the past two years," says co-owner Daylon Brumfield, via e-mail. "With the demise of Fat City and The Steeple there has been a void of music and culture in this area. After looking at a few other spaces in the neighborhood, we finally found the perfect location."

Snug Harbor will start off booking local acts on a Tuesday-through-Sunday schedule before incorporating regional and national music. Off-night entertainment will include regular DJs: Babyshaker's Scott Weaver will spin rock & roll on Thursdays, and "The Reverend of Soul" Brad Presley is penciled in to spin on Sunday nights.

The club owners hope to bring the same eclecticism to Snug Harbor that characterized Fat City. "(Fat City) had a little something for everyone," Brumfield writes. "We want to create an environment with quality acts -- not necessarily ones that everyone's heard of, but ones you'll never want to forget "

Even with its calendar yet to be fleshed out, Brumfield says the overlap that often plagues similar-sized rock-first venues -- in Charlotte, the Milestone, for instance -- shouldn't be cause for concern.

"Those guys are good friends of ours," he writes, "and we will work with the Milestone to book around each other's big events and even close our doors on certain nights to bring our crowd there and vice-versa."

Given the city's rigid booking tendencies, a venue that reflects Charlotte's growing eclecticism should, as Brumfield puts it, "reflect its ever-changing skyline."

BIG CITY, BRIGHT LIGHTS (FESTIVAL): By day, John Morgan of Matador Blues teaches art to elementary school kids, including many with disabilities. That experience provided his inspiration for the Bright Lights Festival, a gathering of local acts that Morgan hopes to put together in September to benefit the Levine Children's Hospital.

"It started as an excuse to get a couple of our best musically inclined friends together for a simple afternoon of guitar-pickin' and good times," Morgan says. "Then more and more people wanted to get in on it, and we thought about how much good we could do if we started seriously pursuing the thing from a philanthropic angle."

Festivals featuring local acts haven't had much luck in recent years. The now-defunct City Fest intermittently included a local stage, but that attempt frankly couldn't even meet the low bar of tokenism; Charlotte's best musicians and acts were rarely -- and in most cases, never -- part of the equation.

So Bright Lights would certainly be filling an unpleasant void. While Morgan cautions that the festival is still in the earliest planning stages, the response has been "incredible," he says. He's received tentative commitments from, among others, The Sammies, C.R. Rollyson (ex-The Talk), The Situationals and The Lazy Montanas.

"Within the first week or so of our spreading the word about it, we'd had several great acts say they'd be willing to help if their schedules allow," he says. "We have lots of friends in bands around the region, so setting up a nice little line-up of Charlotte's finest shouldn't be a problem."

Morgan's in negotiations with local venues, but doesn't have any firm commitments yet. Currently he's hoping for an event with two band stages, possibly outdoors.

"Right now we're thinking about doing it all during one of those long late Summer/early Fall Saturdays in September," he says.

Morgan's booking experience may be limited to his six years of promoting Matador Blues shows, but all he has to do is think about his teaching charges to get inspired.

"I'm just a starry-eyed song-and-dance man looking to have an amazing night for some amazing kids," he says.