Not By Any Other Name 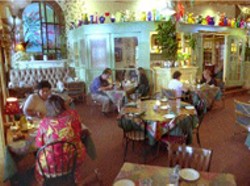 A rose by any other name would smell as sweet, as Juliet plaintively mused, but Charlotte's Pewter Rose Bistro is one of a kind.Pewter Rose has been around in Charlotte longer than most food writers currently writing. The original Pewter Rose, known as The Pewter Rose Bistro, was a small lunch spot on Spirit Square's lower level opened in 1978 by Helen Scruggs. In '78 downtown Charlotte was a radically different environment, but Scruggs served imaginative dishes on mismatched plates. Folks flocked to have artichoke soup or cinnamon-flavored honey yogurt dressing on fruit salad. The menu had the flavor of the original Silver Palate Cookbook.

By 1985, Scruggs had published a Pewter Rose cookbook and had her Chocolate Chip Nut Torte with an espresso cream icing recipe published in Bon Appetit magazine. All this came to an end in June 1986, when she closed the restaurant, coinciding with the closure of Spirit Square for a two-year renovation.

In 1988, the Pewter Rose Bistro was reborn in a second story loft of a brick warehouse in Charlotte's SouthEnd (but this was before there was a designation). Most of the restaurants in Charlotte at that time were clustered along East Boulevard in Dilworth, in Myers Park, and in SouthPark. No one thought about putting a restaurant in that iffy stretch of South Boulevard.

But Scruggs and business partner Elizabeth Ouellette loved the light streaming in from the tall windows. With the financial help of friends and co-workers (a total of ten investors), Pewter Rose opened in time for Valentine's Day. The interior of Pewter Rose, which has continued to morph into 2003, was then very feminine, pink and lacy. According to Scruggs, she sold her share in either 1990 or 1991. Currently she owns Helen and the Buds, a landscape company.

Today Kevin Giffley is the majority owner and Susie Peck is the managing partner. Among the other partners is Chef Blake Dewey. Peck started her association with Pewter Rose in the early 1980s.

The Pewter Rose has won countless honors from both readers and critics in CL's Best Of Charlotte awards. I have known Susie Peck for many years and recently had the opportunity to ask her several questions about the restaurant.

Creative Loafing: When you opened in SouthEnd, there weren't many restaurants in that area. Describe the location when you moved here and the difficulties you had when you opened.

Susie Peck: Besides 300 East, there was nothing else around here. The Spaghetti Warehouse opened after we did, but South Boulevard was desolate and the parking lot was scary at night. It was a fairly shady area, neglected and run down, and we were on the wrong side of the tracks.

We [the partners] decided the warehouse space was beautiful, the kitchen unlimited, and the rent was reasonable.

To succeed in the restaurant business is quite an achievement since most fail within the first three years. What is the philosophy behind your business?

We have been very lucky. We've had a good staff. Most have been here for ten years plus.

I feel extremely lucky that things happened with the restaurant as it has. People you know come in and recognize you, and you know they're happy to be here. On a food level, it's so comfortable. It's a great feel.

Was there any particular period which was easier? Or harder?

There's been ups and downs. When you have a restaurant, you have to figure out the niche. When we opened we had Helen's original customer base. But we had to rethink things and offer more "normal" things, less exotic. Male customers wanted more traditional food. So we added to our menu. Then we built a bar. Partner Kevin Giffley and I take "research trips" to New York. We go to the offbeat places in SoHo. Every dollar that we spend rejuvenates us.

Pewter Rose has always been associated with good food and good wine. You had an interesting wine list before wine lists were cool. What sparked your interest in wine?

We've always had at least 30 or 40 bottles of wine. When we opened we were doing lower end wines by the glass, but soon we started server better wines, like Sonoma-Cutrer, by the glass. No one else in town was doing that.

How have Charlotteans' dining habits changed in the past 15 years?

People are much more open-minded and experimental. When we opened, we were a non-traditional restaurant, opened by women.

Tell me how the menu has changed over the years?

The hummus platter is the same. That's Helen's recipe. And the Buttermilk Trout and Whiskey Crayfish Gumbo. The Hot Bacon and Spinach Salad has been on the menu for 12 years and the Chesapeake Crab Cakes, too. Now we have the computer to help us judge the popularity of the dishes. We change the menu two to three times a year, but some items, like the Almond Baked Brie, will always be on the menu.

Have a restaurant tip, compliment, complaint? Do you know of a restaurant that has opened, closed, or should be reviewed? Does your restaurant or shop have news, menu changes, new additions to staff or building, upcoming cuisine or wine events? Fax information to Eaters' Digest: 704-944-3605, or leave voice mail: 704-522-8334, ext. 136. Note: We need events at least 12 days in advance.